Guilt and Shame for Writers

I’ve been thinking about this issue a lot.

Several days ago, I posted the following:

1. Guilt and shame are the enemies of the artist.
2. Guilt is when you feel as though your time should be spent doing something else, for someone else.
3. Shame is when you think what you’re producing is not good enough, or you’re not good enough as an artist.
4. The only way to deal with guilt and shame is to feel them, because you’re going to feel them. Then do, and show, the art anyway.

I have to deal with guilt and shame all the time. I think most artists do. Guilt and shame are two different things, so I’m going to try to define them. But they’re similar in that they’re equally debilitating. And equally difficult not to feel — I think they afflict most of us who are trying to do creative work.

Guilt is focused inward and has to do with a sense of what you should be doing that is not art, and who you should be doing it for. I have a daughter; time I spend writing is time I don’t spend with her. I have a sense of duty as her mother, but of course I have a lot more than that — I want to spend as much time with her as I can, because time passes quickly and I know she’s growing up. Every experience we have together, even if it involves sitting on the sofa watching a movie, is precious. And I have students, a lot of them. I have a sense of duty towards them, and also toward the university programs that employ me — but beyond that, I want them to learn and succeed. Time I spend writing is time I don’t spend grading their papers, creating lessons plans. Would I be a better mother and teacher if I didn’t write? I don’t know. I’m sure I would have more time . . .

So that’s guilt: the continual sense that you should be doing something else, for someone else. The sense that writing is an indulgence, and your duty lies elsewhere.

Shame is different: it’s a sense about the work itself, that it’s not good enough, will never be good enough — for others. Shame has to do with how other people perceive you. If you never showed your work to anyone, you would not have a sense of shame about it. You might have a sense of failure, but it would be a private failure. You would feel relief — at least no one has to see how I failed!

Shortly after I posted about guilt and shame, I also posted the following:

Everything I write is a failure in some way. It never lives up to my original idea of it.

I think that’s true for so many writers. You have the story in your head, which you’re convinced is going to be the best one you’ve every written. And by the time it gets onto the page, it’s a flawed, awkward thing, like a young falcon, wet, tousled, squawking for worms. And you think, what happened to my original perfect conception? All the words are wrong. Even the commas are wrong . . . By that point, you’re convinced it’s the worst story you’ve ever written, and your writing career, such as it was, is over.

The more you write, the more you realize that this is a cycle, that it happens every time. Months later, particularly if you see the story in print, you’ll think — it’s not that bad after all. Not perfect certainly, but not the worst I’ve ever written either. But understanding that it’s a cycle and actually getting rid of the shame are different things — understanding happens in the conscious mind, whereas the sense of shame lies much deeper, in the unconscious. Understanding simply brings it to consciousness, helps you talk to yourself about it. The shame itself doesn’t go away.

At least I’ve found this is the case for most writers. It seems to me that there are writers without that sense of shame, who are confident in their own writing (although how would I know, since I don’t inhabit their heads). They tend to be writers who were encouraged by their families and teachers from a young age. The rest of us, particularly if we were discouraged at some point, have internalized a sort of societal voice. It says both that the work is not good enough and that you, as a writer, probably as a person, are not good enough.

And then it becomes not about the work, but about you: I must not be good enough, I must not be smart and skilled and dedicated enough, to be the writer I imagine I could be.

Therefore, says guilt, you’re wasting time. You really should be doing something else: volunteering at the local food pantry, supporting a political cause you believe in. Serving on the PTA. Don’t get me wrong, those are all good activities. But guilt says, you should do them instead of your art. Because, adds shame, your art is worthless.

If this were a self-help article, this is the point at which I would tell you how to defeat guilt and shame, as though they could be removed like an appendix. It’s not that easy. I’m pretty sure guilt and shame are here to stay.

All I can tell you is what I do. The first step is understanding what they are, and how they’re stopping you. And then, since they’re different, approach them differently.

Guilt: If you have the something inside you that makes you a writer, or a painter, or a musician, it’s like an itch. I find myself writing all the time, whenever I have free time. For fun, because that’s what I enjoy doing. When I can’t write, it’s like an itch in the middle of my back that I can’t scratch. Or worse, because I start getting tangled up inside. It’s as though writing untangles me. What I believe is that if you have that particular itch, something put it in you — call it what you will, but you were created with a purpose, and it’s that purpose, unfulfilled, that causes the itch, that makes you want to scratch at it, almost desperately. You were make to create whatever you have the impulse to create, and your unhappiness when you’re not creating is it the universe itself speaking to you, saying: hey, you’re ignoring me.

So yes, you have a duty to your family, to your students. But you also have a duty to yourself, and to something greater than yourself — to the work itself that wants to be created through you, and to the creative power of the universe that is trying to find a means of expression and has chosen you for it. If you ignore that duty for all the others, you will end up unhappy, unfulfilled. If you’re anything like me, you’ll probably end up feeling guilty for a whole new reason . . . now you’ve failed in your duty in another way, to yourself and God or whatever! But at least you’ll be able to see that these are competing duties, and that sometimes your parenting or teaching need to come first, but at other times your writing needs to come first. And then, maybe, you can start to negotiate among them.

Shame: The only way I know to deal with shame is a form of behavioral therapy in which you do exactly what you’re afraid of. And if you don’t die, then you know that you probably won’t die . . . the next time you receive a rejection, or moderate a panel, or do a reading. It’s not fun, but it works. Whatever you’re afraid of the world seeing you do, do that. Every time I publish a piece of writing, I feel a sense of shame, because as I pointed out, everything I write is a failure. I think, this isn’t good enough to show the world. (It seemed so good after I finished writing it, but by the time I’ve revised it and I’m fixing commas, I realize that I can’t even punctuate properly, so what made me think I could be a writer?) That’s one of the reasons I keep writing and sending out the work — because it’s scary.  And it’s partly why I write this blog, because who am I to offer advice, to tell anyone my views on life, the universe, or anything?

But many of you, in your kindness, tell me that what I write resonates: that you feel and see it too. And I’m betting that many of you, if you’re writers or artists, or maybe if you’re just human beings, will relate to what I’ve written above. Which is perhaps the final way to deal with guilt and shame, and equally applicable to both. Realize that aside from a fortunate few (and we’re not even sure of them), we all feel guilt and shame. We’re all in this together. 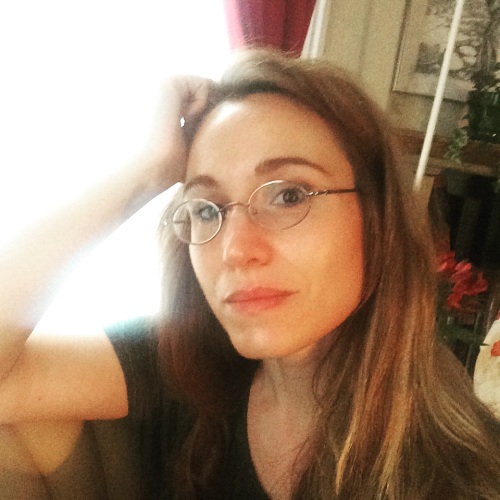 (I thought this would be the most appropriate picture for this particular post: it’s of me first thing in the morning, before I’ve washed my face or even brushed my hair. In exceptionally good light, but otherwise, as the universe made me, whatever idea it had in its head at the time. About to eat breakfast . . .)

10 Responses to Guilt and Shame for Writers