The Joy of Poetry

I’ve been writing poetry for as long as I can remember.

The earliest poems of mine that I still have are from high school. That’s when I started writing seriously, on scraps of paper, whatever I had on hand, and then recopying my poems into a large green notebook. That’s also when I started submitting poems for publication in the school literary journal. I think it was junior year that I won my first poetry prize, for a poem on Icarus. It was published in the literary journal and illustrated by another student. I was so proud . . .

Why does a child start writing poetry? I think it’s natural for us to love poetry: after all, the first literature we’re introduced to is poetry, in the form of nursery rhymes. We clap our hands to poetry, jump rope to poetry. The difference between “Mary, Mary, quite contrary, how does your garden grow?” and John Keats’ “Ode to Autumn” is a difference in level of complexity, not fundamentally in kind. We love poetry naturally, and then we are taught out of that love, usually in school. I’m not sure how it happens. I think it starts with having to analyze poetry, to pick it apart for meaning and structure rather than letting it sing in our heads. It also comes from being taught, at the school level, only poetry that is somehow socially relevant: we are taught poetry with a political message because it’s easier to teach. The teacher doesn’t have to deal with the poetry-ness of it at all: it can be taught as social commentary that just happens to rhyme or have an underlying rhythm. Those of us who continue with poetry often belong to a particular sub-category of the high-school nerd, the literary magazine nerd — closely related to the theater nerd, and often found at the same parties.

I belonged to that category in high school. I was in theater, I wrote poetry. You could tell the literary magazine nerds because they tended to do things like read incredibly difficult books, books with intellectual cachet, prominently. They read Franz Kafka. They carried around James Joyce’s Ulysses. If they were female, they often swore allegiance to Sylvia Plath. The danger of belonging to this particular category is a kind of intellectual snobbery, but considering all the dangers of high school, intellectual snobbery is a fairly minor one, on the level of getting burnt by a toaster.

In college, I continued to write poetry. I continued to submit to the school (now university) literary journal, and at one point I was even on the literary journal’s editorial board. I continued to be published. But in college something changed. I started taking classes in writing poetry, and by the time I graduated from college, I was not sure if I wanted to write poetry anymore. I had been taking classes with famous poets (there were a several of them at the University of Virginia, where I went as an undergraduate), and they not only undermined my confidence in my own ability to write, but also made me question whether poetry was worthwhile. I think there were two reasons for this. First, the classes were intellectually lazy: they took place once a week, for several hours, and during those hours all we did was sit around and critique other students’ poetry. There was no rigor to the classes, no actual teaching. The teacher would lean back and let us do most of the work. Second, the teachers all emphasized the poetry that was then in fashion. This was the late 1980s, so confessional poetry still seemed fresh and innovative. That was the poetry we were supposed to be writing. It was all free verse of course, but not free verse in the way earlier 20th century poets had used it, with underlying rhythms and playful patterns. It felt loose, like one of the beanbag pillows that were popular then. And it felt insular, almost parochial (we never studied foreign poetry — it was always the American, sometimes English, poetry of the 1970s and 80s.) I could not make myself interested in it.  If that was the direction poetry was heading in, I wanted out.

If I were to teach an undergraduate class in poetry, I would not start with workshopping at all. No, I would say, first we’re going to start by doing exercises. You’re going to write poetry in different forms: ballads, sonnets, villanelles. Because when Picasso was your age, he was imitating Velasquez. That’s how he eventually became Picasso. And it’s going to be bad, because you’re all going to be terrible at writing formal poetry — most people are. But it’s going to make you better poets, whether you’re writing in forms or in free verse. And we’re going to study the history of poetry, particularly in English but also in translation because you need to look beyond your own literary tradition. In this class you’re going to work . . . That’s the class I wish I’d had, a class that would have taught me about poetry in a deep way. That’s the sort of class I think would have inspired me.

I should rephrase my earlier statement: I still wanted to write poetry, but I no longer wanted to be a poet. Being a poet seemed incredibly pretentious, artificial — an extension of the intellectual snobbery that had seemed so cool in high school. By this point I was in law school, and I was still writing poems, on scraps of paper as I had when I was a teenager, then typing them into my computer and printing them out on a dot-matrix printer. I started sending them to small literary magazines, very small because I had no confidence in my own writing anymore. And my poems were accepted, as they had been when I was in high school and college. So I was still writing and publishing: what had changed was something inside me. I wrote though law school, then through being a lawyer — I have poems I still remember writing in my 42nd floor office in downtown Manhattan. Honestly, they were not particularly good poems. A few of them were good enough that I included them in my poetry collection, but most of them will remain hidden in my notebooks . . . The percentage of good to not-publishable was pretty low.  Still, when I look at my own poems, even as far back as high school, I see something in them I like, a way of using words, an inventiveness. Writing all those poems made me the writer, including the prose writer, I am.

After several years of working as a lawyer, I went back to graduate school for a PhD in English literature. I continued to avoid poetry — all my graduate work was in prose fiction. But I wrote poetry in secret. I didn’t submit much, because it didn’t seem worthwhile. By this time I was attending fiction-writing workshops (Odyssey, and then Clarion), and I was starting to sell short stories. Unlike poetry, those paid — and editors reprinted them, so they continued to circulate, to get attention. Since my first fiction sale, I’ve been writing short stories regularly. Some of them have been finalist for or won awards, and of course I’ve been paid for them, sometimes well, but always something. My first novel will be coming out in 2017. Until a few weeks ago, I’d mostly given up on poetry. I realized, from looking at my notebooks, that I rarely wrote it anymore. At one time, I would write approximately a poem a week. Recently, there have been years when I wrote one or two . . . for the entire year, and then only because I was asked by an editor who wanted a poem for a specific purpose.

So what changed in the last few weeks?  Nowadays I’m a teacher, teaching writing of all sorts, to both undergraduates and graduate students. Since November, I’ve been so busy with end of the semester work that I haven’t had time to write, and that’s not good. When I don’t write, I don’t feel quite myself . . . So I’ve been writing poetry, because that’s something I can do over breakfast, or in between teaching classes. I can finish a poem in a day and feel a sense of accomplishment. But I had to think about what to do with those poems. I didn’t want them to languish in notebooks. Trying to publish them in literary magazines no longer seemed worthwhile. When I sent poems to magazines, they were usually accepted. But it could take weeks to months before I heard back, and longer than that for the poem to actually be published.  And I certainly didn’t write poetry for the money — the average payment for a poem is between a copy of the magazine and $20.  Once the poems were published, few people read them — few people read literary magazines anyway, and poems get the least attention of all.

And yet . . . the few times I had shared poems online, people had liked them.  They had reshared them, commented on them.  That surprised me . . . I thought, why don’t I just continue to do that?  So I started sharing poems on my blog.  That had a magical and unexpected effect: I started writing more poetry. I think when you’re a creative person, you need to get whatever it is you’re creating out, so you can create more. If you keep it in, it starts getting blocked up, and then what you’re left with is stagnant water, like the pool behind a beaver’s dam. You want the creativity to flow like a stream. Once I started putting the poems out there, publishing them online, I started writing a lot more. And that felt good . . .

But I started running out of room on my blog.  So I created a new blog, dedicated specifically to poetry.  It’s called, quite simply, Theodora Goss: Poems.  You can go take a look . . .

The poetry I write is rooted in myth and legend and fairy tale, not as a conscious choice but because those are the things that inhabit my head. They assume the world is deeply alive because that is how I approach the world. In a way, they are the clearest statements of what I believe in and care about — even more than my prose. They are deeply influence by the poets I have loved, some of them poets who are fashionable (W.B. Yeats, Anne Sexton), some of them poets who fell out of fashion long ago, or never were fashionable in the first place (Mary Coleridge, Robert Graves). I am particularly influenced by the history of women writing fantastical poetry, such as Christina Rossetti and Sylvia Townsend Warner. In their poetry I find a subtle subversiveness, and a fine feeling for the underlying magic of human existence. And that, fundamentally, is what I write about.

The blog is an experiment — we’ll see if it works. But my goal is simply to write more poetry and share it. If it does that, it will have fulfilled its purpose. 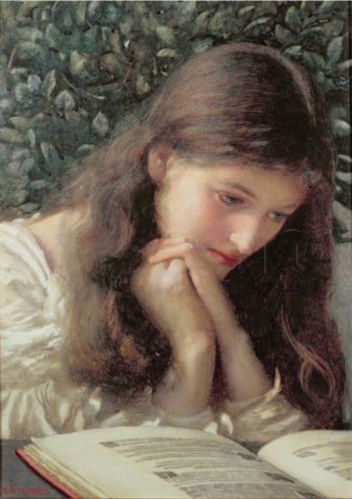 (The painting is by Edward Robert Hughes.)

7 Responses to The Joy of Poetry