This past week, I was in a very beautiful place: Peaks Island, Maine. It’s an island in a bay of the Atlantic Ocean, a ferry-ride from Portland. I was there with my daughter, to get away for a few days before school starts in September. It was my second time on the island, and her first. I thought she would like it because it was an island, and because there isn’t much there . . . houses, a grocery store, a coffee shop, a place to buy ice cream. A library, a post office . . . it’s not a tourist destination, not really. It’s an island where people live, some of them year-round, some only in the summer. And some of them rent out houses to summer visitors. There isn’t much to do on the island except rent bikes at the bike rental shop, ride around or take a walk, visit the beaches. Go sailing if you have a sail boat.

To get there, we had to travel by subway to the train station, by train to Portland, by taxi to the ferry station, and then by ferry to the island. But it was worth it. We had three days of sunshine and mist, riding our rented bikes, eating ice cream. Falling asleep to the sound of the fog horns. And I took a lot of pictures.

There were various factors that influenced how I felt, on the island. The cool air, coming from the sea. The moisture in that air, the cleanliness of it. The sounds of the natural world around me: crickets, ocean waves. There was no sound of traffic. But one thing that influenced me deeply was the beauty of the place.

I want to argue here that beauty is important, and that we misunderstand it. There was a time when we dismissed beauty, culturally. We dismissed it in art, in architecture. It seemed elitist, reactionary. It seemed old, like something you inherited from your grandparents. Out of date, unnecessary.

And now I think we find ourselves in need of it. 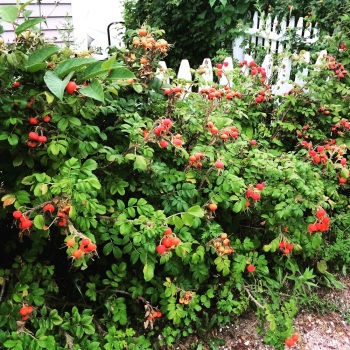 Beauty is difficult to define. I know, because I’ve taken classes on aesthetic theory. I’ve read about the beautiful, the sublime, the picturesque . . . To be honest, my favorite definition of the beautiful comes from William Hogarth, who defines it as the maximum amount of complexity within unity, which sounds very technical, doesn’t it? Hogarth’s definition says nothing about our actual experience of the beautiful, but it’s a useful way to think about what constitutes beauty, almost in a mathematical sense. What Hogarth is describing, ultimately, is a fractal . . . My least favorite definition comes from Edmund Burke, who was really trying to define the sublime: so beauty, necessarily, was whatever was not sublime. The small, the attractive, the comfortable. You know, like women. (He said it, not me.) I think Burke totally missed the boat.

When we see something beautiful, it’s often not small, not comfortable. And our attraction to it also has another component, a kind of fear. Lightning is beautiful. A lion is beautiful, before it eats you. And the beautiful can be frightening in another way, which I think is its deeper, truer way: flowers are beautiful, but they die quickly. They remind us that life is evanescent, that the beautiful is after all fleeting — even though beauty, I believe, remains. Dead flowers can also have a beauty about them.

So beauty is complicated, which makes sense (see Hogarth).

I am reminded, here, of Richard Eberhard’s poem “The Cancer Cells,” in which he describes the cancer cells as dangerous and beautiful, seen (presumably) through a microscope. At one point in the poem he describes seeing, in them, “The fixed form in the massive fluxion,” which I think fits very well with Hogarth’s definition. A point of stillness that nevertheless reveals the ever-changing, always altering universe around us. And that’s art too, isn’t it? Which is what Eberhardt points out. The poem ends,

“I think Leonardo would have in his disinterest
Enjoyed them precisely with a sharp pencil.”

Scientists talk about the beauty of an experiment, or an equation. I think that beauty is an underlying order that captures and encompasses chaos. It’s seeing the pattern of the fractal . . .

So what is the aesthetic experience of the beautiful? It does not make us more comfortable. What it makes us feel, I believe, is more alive. It gives us a sense, not of contentment, but joy.

I had two experiences recently that made me think of beauty as an aesthetic category. The first had to do with architecture. On the campus where I teach, the law school is notoriously ugly — by notoriously, I mean that it’s been called one of the ugliest law schools in the country. It’s also a famous example of Brutalist architecture. It’s meant to assault the senses. On campus, it stuck out exactly like the proverbial sore thumb: a tall block of concrete with small windows. It made you feel that law was, after all, a pretty horrible business. And it didn’t quite work . . . like many buildings of that era, it had not been constructed for human comfort. The windows did not open, but the ventilation system was inadequate — the elevators kept breaking. I write in past tense because this summer, the law school was refurbished. At first, the university considered knocking it down and building a new school — but why knock down an imperfectly good building? What it did instead was build a new addition at the ground level, then clean and repair the old building. I look at it now and think surely the windows are larger? It feels like a new building, even though it’s not. Somehow, through the cleverness of good architecture, it has been integrated into the campus. It no longer sticks out.

I use the word “ugly” with caution, because I think it’s also a complicated and important aesthetic category. We treat it as the opposite of the beautiful, but I’m not sure it is. The opposite of the beautiful may be something more like . . . the pretty. We think of the ugly in two ways: there is the ugliness of the hyena, and of the trash heap. The ugliness of the hyena is interesting, complicated — it’s close to beauty. It’s like the ugliness of Eberhardt’s cancer cells. When nature is ugly, it tends to be ugly in this way. The ugliness of the trash heap is different: it’s a lack of pattern, a lack of structure. It’s chaos without the underlying order. It reminds us, not of death, but the immortality of plastic.

Of course it’s difficulty to categorize these experiences because what we experience is on a continuum. The classification of aesthetic experience is a human activity, an attempt to understand the different ways we interact with the world. Although recently I saw a pod of beluga whales following a boat on which a man was playing the cello. They were clearly following and responding to the music. Do whales have aesthetic experiences? I bet you anything they do. The idea that only human beings experience the beautiful, sublime, and ugly is a profoundly anthropocentric one, and I think it’s wrong. (Although I bet only we experience the picturesque. But to me, that’s not one of the fundamental aesthetic categories.)

The other experience I had recently is so trivial that I hesitate to mention it, but it goes to my main point here. I have a Twitter account, and Twitter recently removed all the personal backgrounds from accounts. My background had been the same one I have here, which is a William Morris pattern for wallpaper. Now all the backgrounds are standard, and that sickly pale blue I associate with hospitals. When my background disappeared, my feelings about Twitter changed. Suddenly it was just another place to post, not a place that was mine, that was decorated. That was beautiful. Instead, it was bland. And I no longer feel anything toward it. 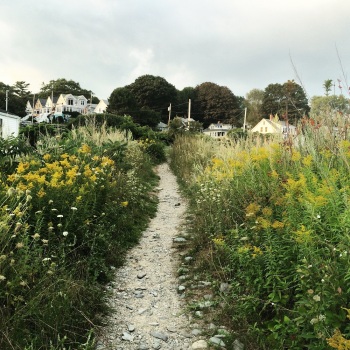 I write all this because beauty is important to me, as an artist. I feed off it, which is partly why it felt so good, so invigorating, to be on Peaks Island. The hips on the rugosa roses, reminding me that autumn is coming. The rocks by the seashore. The endless, changing and yet changeless sea. And I try to create it, without creating the merely pretty. I have found that in order to create something beautiful, I need to incorporate what is dark, what might be considered ugly. I need to incorporate death. One of the most beautiful things I saw on Peaks Island was mist beading on a spider web . . .

So I, at least, will keep thinking about these aesthetic categories. And particularly about the concept of the beautiful, which is so important and complicated, when you’re the sort of person who creates art.