Some of us have strange faces.

Mine, when I look in the mirror, seems all bones: the jaws are prominent, the cheekbones angular, the nose prominent and angular. I have the ordinary features one has on a face, of course: eyes, for example, dark and slanting upward at the corners. But what you notice about my face, I think, is the bones. Helen of Sparta’s face launched a thousand ships and burned the topless towers of Ilium. My face looks ready to sack Rome. (My grandmother always insisted that we were descended from Attila the Hun.)

When I was young, a girl growing up in the South, I did not want to look at my face in the mirror, because it did not match my idea of what a face should look like: soft, with small features, the face of Botticelli’s Venus. That was my idea of beauty. It was also, of course, Hollywood’s idea of beauty. You’ve seen them, the young actresses with distinction and individuality, the Clare Danes, the Scarlett Johanssons. You’ve seen them in their first independent films, perhaps found them interesting, actresses to watch. Then seen them in their first Hollywood movies, their first red carpet appearances. Their features change, become softer, prettier, safer. More like the ideal vision that Hollywood shares with the Renaissance.

It was not until I was older that I discovered a different kind of beauty. I was reading Edgar Allan Poe, and there it was, the statement that revealed a new way of thinking for me: “‘There is no exquisite beauty,’ says Bacon, Lord Verulam, speaking truly of all the forms and genera of beauty, without some strangeness in the proportion.'” Wait, I said to myself. Strangeness in the proportion? What does Poe mean by that? He does not tell us, exactly, but he does give us an example: the Lady Ligeia. His unnamed narrator, who is in love with her (so in love with her! how romantic I thought that was, at sixteen), tells us that he does not know why her beauty is so enticing and yet so strange. He tells us that he “tried in vain to detect the irregularity.” Irregularity! That too was a new idea. It was the first time I had thought of beauty as being irregular. Scientists who study our perception of beauty tell us that test subjects prefer faces with symmetry: the regular is the beautiful. (Yes, the study of beauty has become a science, specifically a medical science. Why else do we buy cosmetics at the drug store? As though ugliness were a disease to be treated, by surgery if necessary. A prominent plastic surgeon has even invented a “mask of beauty,” a geometrical template that you can superimpose on your face to see how symmetrical, how beautiful, you are. Strangely, the mask itself is grotesque, the face of a robot.)

What are these irregular features, according to the narrator? A high, prominent forehead. A Jewish nose. A Greek chin. (Have you seen the chins on classical Greek statues? Those goddesses had serious chins — and jaws.) Dark eyes and hair. All of these features give Ligeia “the beauty of the fabulous Houri of the Turk.” Hey, I thought, that sounds just a little like me. (My father always insisted that his ancestors were Turkish.) Don’t misunderstand me — I was making no claim to exquisite beauty. I felt as ugly as any Hans Christian Andersen duckling. But the idea that there could be something attractive about irregularity — that stuck.

And Ligeia was smart, much smarter that the narrator himself. She spoke Greek, she wrote poetry, she was good at physics. She was even good at math, which was my personal Waterloo. Here was a beauty to identify with.

You can already see the problem, can’t you? Ligeia isn’t exactly an ordinary woman. She dies, probably of the consumption that claimed Poe’s wife, then comes back to life by taking the body of the narrator’s second wife, the blonde, blue-eyed Lady Rowena. Poor Lady Rowena, as conventionally beautiful as Venus on the Half-Shell. In the Hollywood movie, she would be played by Clare Danes. She becomes sick as well, although this time the disease seems to be the spirit of Ligeia, hovering around the macabre bedroom the narrator has created, waiting for her chance. The narrator watches as Rowena seems to die, to recover, to die again, over and over through a dreadful night. Finally, she rises from her death bed, drops the shroud she has already been wrapped in, and — but of course, it’s the Lady Ligeia, risen from the dead. Her dark eyes blazing, her dark hair falling around her. At that point, the narrator is screaming.

Years later, when I started teaching college students, I found a way to conceptualize the effect that Ligeia has on the narrator (who, remember, loves her, to the point that he longs for her return even from beyond the grave — still, he cannot help his screams). By then, I had made a sort of peace with my face. As I had grown older, it had only grown bonier, but I had grown to appreciate its irregularities. When I wrote my own stories, I often described my most interesting female characters, the ones I wanted readers to pay attention to, as birds of prey, with faces like a falcon’s and noses like a falcon’s beak. I had even learned to appreciate my nose. That was when I came upon Freud’s idea of the uncanny. Freud wrote a whole essay called “The Uncanny,” a long, rambling essay that tends to annoy my students because Freud seems to be developing his ideas as he writes, and often contradicts himself. But his central idea is simple. There are certain things that make us feel the sensation of the uncanny. They make us shudder, make the hairs on the backs of our necks stand up. Freud lists a number of these things: severed limbs that move by themselves (like Thing from the Addams family), mechanical dolls that seem to come to life (Freud mentions E.T.A. Hoffman’s Olympia, but I tell my students to think of Chucky), and numbers that keep repeating in a way that seems more than coincidental (like the number 42 in Hitchhiker’s Guide to the Galaxy, although there the effect is funny rather than frightening). But the heart of the uncanny is this: an intrusion of the supernatural into the world we had thought to be natural, operating according to the laws of physics. Ligeia coming back from the dead is such an intrusion. (You have to be good at physics to break its laws.) The narrator’s screams, at the end of the story, are an extreme case of the uncanny sensation Freud describes. Ligeia is uncanny and her beauty is uncanny, like the beauty of the fabulous Houri of the Turks, who are after all supernatural beings. So while her beauty will attract you, it will also make you shudder. The narrator finds her both appealing and appalling.

And she’s not the only one. There is an entire literary tradition of such appealing, appalling women. Some one should edit an anthology. (Perhaps I will, someday.) Think of Geraldine, Beatrice Rappaccini, Helen Vaughan, Carmilla, Lucy Westenra after she turns into a vampire. If you read their stories (I really should edit that anthology), you’ll find the same features, over and over. Dark eyes and hair, for one. A grudge against blondes. (Seriously, the stories are strewn with blonde corpses: Rowena, Laura, Rachel, Christabel.) Men who are simultaneously enthralled and horrified. And beauty: strange, irregular, unusual, appalling beauty.

Monstrous beauty. I use the word monstrous deliberately here, because all of these women are monsters. They return from the dead, suck people’s blood, channel ancient gods, breathe poison. Their beauty is part of their monstrousness. It allows them to get close to their victims so they can attack. Indeed, their victims wait for, anticipate the attack, holding their breaths. How delicious, to feel Lucy’s teeth at your throat. I tell my students that there is a difference between male and female monsters. Male monsters tend to be hideous: Frankenstein’s monster, Mr. Hyde, Dracula (who is not as suave as his movie incarnations). There are ugly female monsters (Grendel’s mother, the alien matching wits with Sigourney Weaver), but they are less common than the beautiful ones. Even Frankenstein’s female monster, never made in the novel because of her potential ugliness, comes to life as a shock-haired beauty in James Whale’s Bride of Frankenstein.

In Ligeia, I had found my role model: the uncanny beauty. In doing so, I had put myself in the company of all the female monsters of English literature and art: the sirens singing men to their deaths, sphinxes biting their heads off for not answering riddles, witches dancing on the heath, vampires claiming the night as their hunting ground. When I began to write, I began to be photographed, at conventions or workshops, for interviews or book covers. Sometimes I thought the photographs were flattering, sometimes not. I began to see photographs of myself on the internet, which gave me a sensation of the uncanny. Suddenly, the face I had seen in the mirror so many times and had spent so long coming to terms with was being presented in ways over which I had no control. So I decided to photograph myself in my own way. In a cemetery, rising from the dead. It was a small tribute to my girlfriend Ligeia, who had gotten me through being sixteen. 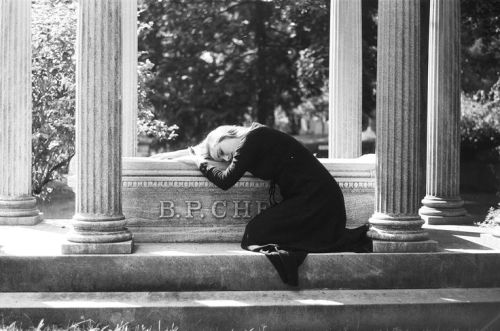 In women’s magazines, there is always a helpful section that tells you how to recreate a featured look. So I’m going to tell you how to become a female monster. Just in case you want to, you know, join me and my girlfriends.

1. Be deadly. If you can’t be deadly, since it is after all difficult and usually illegal to be deadly nowadays, think deadly thoughts. (For instance, about cheerleaders, yappy dogs, frozen yogurt stands, and anyone with loud headphones.) This produces the alluringly dangerous expression that men seem to die for (sometimes literally).

2. Be your own fashion trend. Wear distinctive clothes. These need not be cerements of the grave. Any style that is genuinely individual will do. Notice that the blonde victims all look alike. The monsters are all monsters in their own way.

3. Pay attention in calculus. Female monsters are wicked smart. Learn ancient Greek or any other obscure language (Croatian, Tagalog, Urdu). Read a lot of books. You can never tell when you might need to know something, like how to return from the dead or pose riddles on the road to Thebes.

4. Believe in your exquisiteness. You may have poisonous breath or turn into a serpent at night, but you deserve to be loved. Beyond death. And to have poetry written to you.

Sometimes I look at the women’s magazines in the drugstore and think, they really should have a magazine for us, the female monsters. It would not have Scarlett Johansson on the cover. No, I’m thinking Jane Morris, Sarah Bernhardt, Tilda Swinton. It would have articles on growing poisonous plants, piercing the veils of space and time, and little black dresses for under $100. Potential models would be evaluated for their uncanny beauty, on whether there was any strangeness in the proportion. It would be a plus if they had serious (not adorable, not retoussé) noses. I would buy it. Wouldn’t you?

(This essay was originally published in the special “Uncanny Beauty” issue of Weird Tales, 2010.  I decided to repost it here, for all you uncanny beauties. The photos are, yes, from the photoshoot I described. They must be fifteen years old! My face has only gotten bonier . . . )