How I Do It

This blog is inspired by two articles I read lately about female writers: “The Price I Pay to Write” by Laura Bogart, which was itself a response to “‘Sponsored’ by My Husband: Why It’s a Problem That Writers Never Talk About Where Their Money Comes From” by Ann Bauer. Bauer wrote about how getting married and being supported financially by her husband had given her the time she needed to write. Bogart wrote in response about how she struggles without that sort of support — what writing is like when no one is sponsoring you.

Since then, I’ve seen several writers describe how they, individually, make it work . . . and I thought I would add my voice to the mix. I was particularly prompted by a friend, an editor, who posted on Facebook, “I’m pretty sure that people who write publishable books and also have full-time jobs are magical creatures, like unicorns.” Which makes me a unicorn, I suppose . . .

Here’s how I do it. My full-time job is teaching undergraduate writing at Boston University. I teach a 3/3 schedule, which means that each semester I teach three classes. I’m in class nine hours a week, and then on top of that I prepare for class, meet with students, and comment on their papers. In a typical week, I’ll spend more than forty hours on my full-time job. And I’ll spend extra time making sure that I’m up on what I’m teaching, meaning that I’ve read the latest books and articles on the topic I’m teaching. After all, I’m supposed to be a scholar, teaching my students to think like scholars, or at least take the same time and care as scholars would in their research. Right now I’m teaching fairy tales, so all of that research is pure pleasure for me . . . I love reading fairy tale scholarship and keeping up with the popcultural discourse on fairy tales. I don’t always love commenting on grammar errors, but that’s part of my job — and honestly, I’ve learned a lot from doing just that. It’s not always the most comfortable job in the world — yesterday I walked several miles back and forth from classes in the cold and snow, because the trolley system isn’t working after our record snowfalls. But it gives me a steady income, health insurance, and most importantly the freedom to teach topics I love. I get to structure my own classes and much, although not all, of my own workday. I’m very lucky to have a job I love doing.

Or rather, two jobs I love doing. My second job is teaching graduate creative writing students in the Stonecoast MFA Program. Each summer and winter I go teach a residency at Stonecoast, and in the spring and fall, I mentor three to four students. I read and critique their writing, and we talk about writing issues. It’s more challenging, in terms of the writing issues involved, than teaching undergraduates: we’re focused not on the mechanics of writing, but on the art. On creating characters who come alive, a setting that you’re convinced is real. On moving a story at the right pace. On the practical side, these two jobs give me what I think of as a solidly middle-class income. Not as much as I earned my first year out of law school, twenty years ago. But as much as an experienced legal secretary would be earning. Enough for necessities and some luxuries. (By luxuries I mainly mean books.)

I have two extraordinary expenses that I can’t do much about. First, I live in Boston, which is one of the most expensive cities in the country. People from places like Asheville, North Carolina grow pale when I mention my rent. It takes up fully a third of my income, for a comfortable but certainly not large one-bedroom apartment. Second, I have a ten-year-old daughter, for whom I share responsibility. I want to make sure that she has what she needs, like clothes for a growing girl (the speed with which she destroys jeans is truly astonishing), and also some luxuries, like cello lessons and trips to the museum.

I consider myself very lucky: I can pay my bills, which include student loan payments from when I was in graduate school and pregnant with my daughter, so I couldn’t teach. I can afford some things that make life more comfortable and pleasant, like good chocolate. But I try to reduce my expenses as much as possible. I don’t own a car. I buy most of my clothes at either The Gap or Goodwill. I almost never go out to eat, and when I travel it’s usually because I need to be somewhere for a conference or research. It’s almost always on business.

So where does writing fit into all this? Well honestly, it fits into the nooks and crannies. It fits in whenever I can fit it in. I suppose it fits in where other people would be watching television? Or knitting, I don’t know. I try to fit it in wherever I can. Which means that I’m less productive than many of my friends who are making a living from writing. They simply have a lot more time to write. That’s the downside — the upside is that I’m not sure it makes a difference in terms of quality. If I weren’t working, I would probably be writing more — but I’m not sure I would be writing better. When I think about the writers I love, they didn’t write a lot, or at least not as much as it would have taken to support themselves simply by writing: Jane Austen, Willa Cather, Virginia Woolf, Isak Dinesen, Angela Carter. But they wrote supremely well. Some of them were lucky enough to be supported in various ways, but those were other times. I’m not sure being supported is a particularly good idea now, and I suspect that Austen, if she were alive today, would have a job. She would be supporting herself.

Who knows how it will work out for me. I hope the novel I’ve written is good, I hope I can write the sequel. I hope there will be other novels, short stories, essays, poems. There are times I get tired, times I get dispirited. But I think we all do, no matter our circumstances. For the most part, I love what I do.

So how do I do it? I just work very, very hard. Perhaps someday it will be easier — I’d like it to be. I’d like more time to write. But in the meantime, I fit writing in whenever and wherever I can. I suspect many of us do. 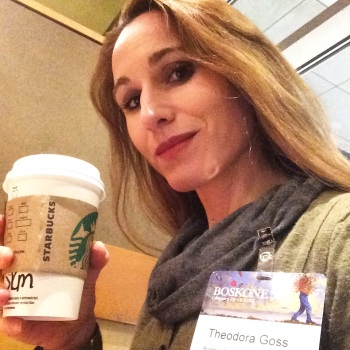 (This was me at Boskone last weekend, being the writer rather than the teacher or academic . . .)

11 Responses to How I Do It