When I was in London, I had a long talk with a friend of mine who said something that struck me. He said that in his life, he wanted a “grand narrative.” And he had gotten one: he’s a musician, composer, and rock star. He had decided on things he wanted to do in his life, and he had done them, and they did in fact create a grand narrative — a fascinating story. His biography would be a terrific read.

It seems almost vain or frivolous to want a grand narrative for one’s life — as though one should be satisfied with the work, and with a measure of security that allows one to do the work. And yet, it’s hard not to want a fascinating biography, a life in which unexpected things happen. At least, I find it hard not to want that, and after all, here I am writing this post at a coffee shop in Budapest. That’s pretty dramatic, isn’t it? And here I am telling stories about my life, on this blog, and Facebook, and even Twitter.

The pictures I’m going to include in this post are from the Hungarian National Gallery, the art museum I visited yesterday. Here is the art museum, which is housed in the castle on Castle Hill.

Pretty dramatic, isn’t it? I think it’s hard not to want a certain amount of drama and excitement in our lives. And to be honest, what I’ve noticed is that the people who want it, who want the grand narrative, tend to get it. They do in fact tend to have dramatic lives, the sorts of lives that would make good biographies. I suppose that to a certain extent, we all get what we want, what we expect for yourselves, because that’s what we work for.  (Not completely, of course, which is why I qualified that statement.  But our expectations do seem to determine our possibilities, at least in that what we don’t want or believe we can have, we usually don’t try for.)

This is the castle from below, when you’ve climbed down the hill and are ready to cross the Chain Bridge.

And this is the Chain Bridge, which is also pretty dramatic, with all its lions. I think every bridge needs lions, don’t you? Lots of lions, as many lions as possible and as good taste will allow. We all need lions to add drama to our lives. 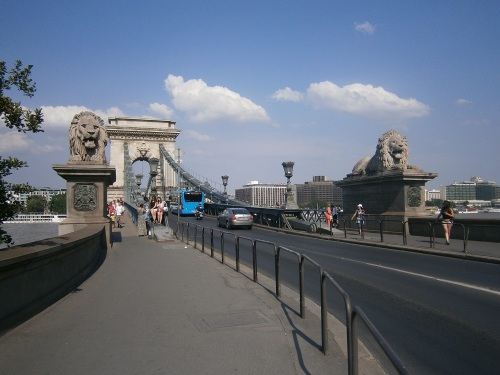 And finally, here is me on the Chain Bridge, in front a beautiful design and some graffiti. That’s so Budpest: the Art Nouveau decoration and the graffiti both. 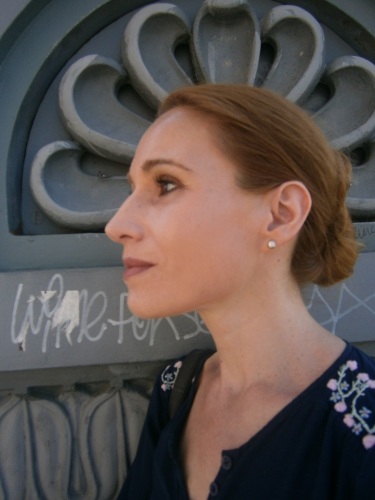 Many of my favorite writers and artists did have grand narratives. Isak Dinesen, Virginia Woolf, Georgia O’Keefe . . . They did not necessarily have happy lives, and the problem with grand narratives is that they’re not always happy. I’d like to have the grand narrative and the happiness both. But I understand what my friend meant by wanting a grand narrative. I want one of my own, and I think I’m doing a pretty good job of creating one — well, as much as I can. And then, I also want to do the good work . . .