I grew up going to art museums. My mother always took me, although we have very different tastes in art: she likes modern art, by which I mean late 20th century. I like art of the 19th and early 20th centuries. When I was old enough, I would go into Washington D.C., where I lived as a teenager, and spend the afternoon at the art museums. Luckily, in D.C. all the museums are free, or I could never have afforded to go . . .

Whichever city I’m in, I always go to the art museums. In Boston, I’m a member of the Museum of Fine Arts, and here in Budapest, I knew that I wanted to go to the large, official art museum, the Hungarian National Gallery, before I left. I hadn’t been in a long time, because when I’m here I’m often with friends, and we go see the more touristy things. Not the art. But yesterday, I finally had time to go, and so I went.

The Hungarian National Gallery is in the castle at the top of Castle Hill. That means it’s an all-day trip, because I have to get up the hill, and then see the art in the museum, and then get back down the hill. That takes several hours. Yesterday was a perfect Saturday for it, except for the heat. But at least it was cool in the museum . . . This art museum is different from most of the large official art museums I visit, because it focuses specifically on Hungarian art. There’s no effort to include a token Picasso or Matisse for example, as you find in so many other art museums, and certainly in the American ones. I like that: it means you get to see all the art movements as they filtered through one particular country. I have a favorite Hungarian artist, and I’ll include three of his paintings here, each of which I saw in the museum yesterday. His name is Pál Szinyei Merse (1845–1920).

This is a painting called The Skylark: 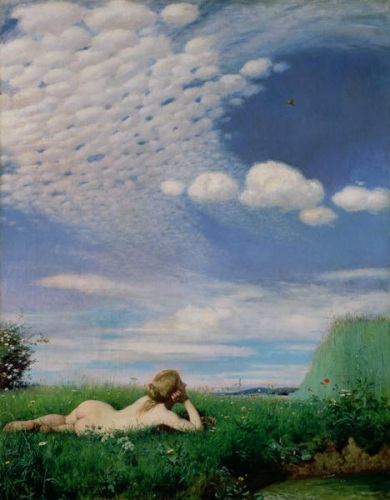 I loved seeing the history of art through this particular national lens. It was particularly interesting to see late 18th and 19th century academic art applied to Hungarian subjects: incidents from Hungarian history, village celebrations, famous Hungarian beauties of their day. It was a lovely change from seeing the same techniques applied to English, French, or Italian subjects, which is what I’m used to.

What the museum made clear to me is the richness of the Hungarian artistic tradition, from the middle ages up to World War II. The period of the Hungarian Secession, which was the name given to the Hungarian version of Art Nouveau, was particularly inventive and original. It was a uniquely Hungarian interpretation of an international art movement, and you can see its effects in the architecture of the city, all over Budapest. That was in the late 19th and early 20th centuries — my favorite period, of course. And then, World War II happened.

This painting is called Faun and Nymph:

Judging from the art in the museum, World War II was devastating for Hungarian art. To my eye at least, Hungarian art after World War II, at least as represented in the museum, was entirely imitative. I found it interesting that even in the museum’s collection, World War II formed a dividing line in terms of art history: 20th century art to 1945 was displayed separately from 20th century art after 1945. And the art after 1945, to the 1980s — I’m not entirely sure how to describe it, except that although I don’t love the abstract expressionists, I do admire their innovation and power. But I’m used to looking at the spectacular American examples in the Boston Museum of Fine Arts, or in the museums in New York. These paintings were abstract expressionism without its power. And they did not seem particularly Hungarian anymore.

And here is The Balloon: 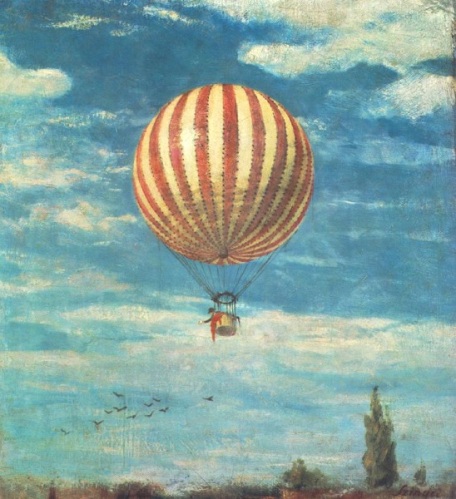 I am, of course, open to being told that I’m wrong, that important art was happening in Hungary during that period. That I just didn’t look closely enough, or that it isn’t represented in the museum collection. I would be interested to hear a contrary opinion.

I don’t have any particular words of wisdom to end this blog post, except ones I’ve written before: that it’s so important, for writers particularly, to go to museums, to see art. No matter how small the museum, you always learn something. You always take something away with you, like a gift . . .

4 Responses to The Art Museum