This blog post is really about how differently men and women can perceive certain things, but I didn’t think that would make a very good title. And Bluebeard does come into it, as you’ll see.

Some time ago, a friend of mine whom I will call Nathan, because his name is Nathan, and I were having a conversation. Nathan is a big, strong guy, about twice my size. He told me that when he lived in New Orleans, he had loved walking around the city alone, late at night. I said to him, “Nathan, I’ve never walked around a city alone late at night.” There was a moment of silence, and then he said something like, “Oh, right. Sometimes I forget how different it must be for a woman.”

I’m writing this post in part because there have been conversations recently, in the media and on the internet, that have made clear how differently men and women can perceive certain words and actions. Some of those conversations have been about the literary world I live in, particularly the fantasy and science fiction corner of it. And the point I want to make, centrally in this blog post, is that something that may not seem threatening to a man may seem profoundly threatening to a woman. I’ll give you an example.

I don’t know if this is true for all women, in all circumstances, but if I’m the woman in that scenario, particularly if I’ve been walking down that street absorbed in my own thoughts, as soon as I’m spoken to I will immediately check my surroundings. What time of day is it? Is there anyone else on the street? How threatening does the man seem? (Although I have to add, if I’m completely honest, that I never walk down a street lost in thought. I used to when I was younger. I’m smarter now.) 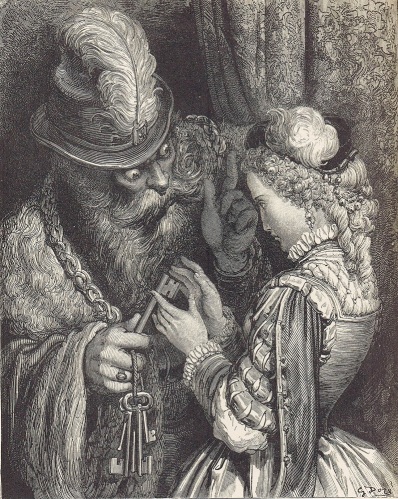 When I teach my class on fairy tales, I ask students about the moral of “Bluebeard.” Charles Perrault gives us a moral, clearly marked “moral,” at the end of the tale: “Curiosity, in spite of its appeal, often leads to deep regret. To the displeasure of many a maiden, its enjoyment is short lived. Once satisfied, it ceases to exist, and always costs dearly.” I ask my students, is that really what we learned from the story?

No, they tell me. That moral doesn’t make sense. If Bluebeard’s wife hadn’t been curious, she would never have known that he had killed his previous wives. And although he tells her he’s going to kill her because of her curiosity, and we can infer that he killed most of his other wives for the same reason, what about the first wife? Why did he kill her? Clearly this is a man who simply likes killing his wives, and will eventually think of a reason to kill again. So, I ask them, what is the moral? And eventually we come up with something like this:

“Make sure you know whom you’re marrying, because your husband may be a serial killer.”

If you’re a woman, and you’ve lived for a while in the world, you’ve learned to be cautious. You’ve learned that you don’t know who people are, or what they’re capable of, until you’ve known them for a long time, and sometimes not even then. If a man is bothering a woman, it’s easy for another man to say “Ignore him. He’s just a creep.” Or “He lacks social skills.” But the woman in that situation has to approach it by thinking, what is the worst case scenario? What is the worst that could happen? And then she has to act based on that supposition. Often that means acting swiftly, decisively, with maximum effect. Because you have to establish, definitively, that you are not to be messed with.

Let’s go back to that first scenario, with the woman walking down the street. If the man who thought he had paid her a compliment knew she was assessing him as a potential attacker, he might blame her: he might say, why didn’t she realize I was trying to be nice? What he wouldn’t know is how many times she had been approached on a street by a man who said, “Hello, beautiful,” and then continued with a sexual proposition. For an average woman, it would be a least once, but probably more than once. After a while, if you’ve been living while female, you get a sort of PTSD. Most women have been through assaults of various kinds. (I once looked up from reading a book in the public library to see a man masturbating on the seat across from me. I think I must have been about fourteen?) Most women have dealt with some sort of silencing or discrimination. (When I was at Harvard Law School, there were male students who argued that women who were going to take time off to have and care for children were taking up space that should go to qualified men.) This history conditions how they respond, whether to a compliment on a street or to male writers who talk about them with a lack of respect (see the latest SFWA scandal). (It’s also worth knowing that women talk to one another: we know when a male writer regularly hits on young female writers at conventions.)

“Bluebeard” has been interpreted in a variety of ways, but its simplest meaning is a cautionary one, to women. What it really says is, be curious, be bold, protect yourself. Considering the things women have to deal with, it’s scarcely surprising that they have learned this particular lesson.

I know I’ve put a lot into this blog post, and parts of it may not fit together with perfect logic. But it represents a series of things I’ve been thinking recently about differences in perception. If you’re a man and want to work or socialize with women, it’s probably worth considering how their perception may be different from yours, and what may lie behind that difference.

45 Responses to On Bluebeard