This may be a short post, because I’m not sure how many minutes I have left on my free wifi.

First, I thought you might like to see the Elgin Marbles in the British Museum. I know the political controversy that surrounds them and their purchase by Lord Elgin, but I was glad to be able to see them in a museum, at eye level. I believe a museum is where they belong. But then, I think art is more important than nation-states. Walking through the British museum reinforced that notion: all the nations that have passed, that no longer exist! Except in their art. The art is important. Borders and national ownership are temporary. 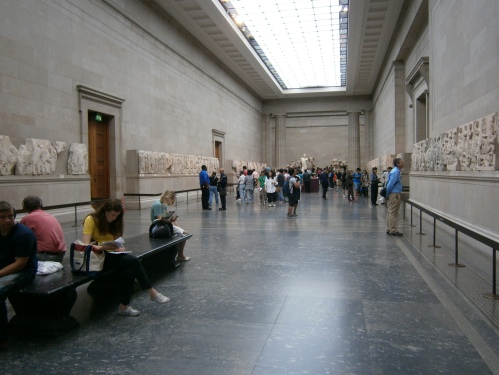 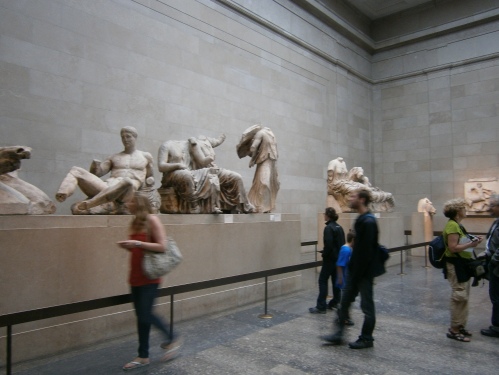 My favorite sculpture, as you might expect, was this head of a horse. So wonderfully modeled and so expressive!

One of the most interesting parts of the museum in terms of my research was the long room in which items are displayed as they would have been in the nineteenth century: in a series of evolutionary sequences. So for example, pots were displayed to show the development of pots, evolutionarily. There is a beautiful and false logic to that sort of display and the thinking it represents. That was the subject of my doctoral dissertation, and it’s finding its way into my novel as well. About which more anon. 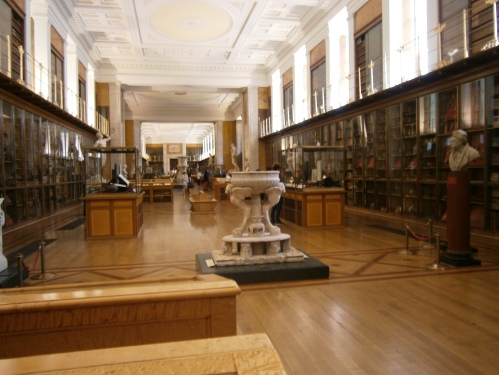 This was another of the really wonderful meals I had in England: just a slice of oat honey loaf and a cappuccino. The best places I found to have coffee in England were, strangely enough, the British Museum and Victorian and Albert Museum cafés. And both of them sold this delicious loaf.

I think I’ll end my post here today, because I have to run to Tesco to pick up some more food before picking up Catherynne Valente at the airport. If you’ve been following my blog, you’ll know that the two of us are here on a writing retreat. We’ll be working hard, writing and editing. But we’ll also be seeing the city.

Oh, and about the novel. I think I finally figured out how to write it. Last night, I intensively revised part of the first chapter. It’s going to be quite different than I thought it would be, more like the original novella than I expected. And I have no idea if, in this form, anyone will want to publish it. But I’ve decided that the only thing worth thinking about, when I write a story, is whether I like it, whether I want to write it, whether it excites me. The time to think about all those other considerations is afterward . . .