I am a human being, and I am woman. But there have been times in my life when I’ve been treated like the latter instead of, rather than in addition to, the former.

Why was I thinking about this today? Probably because I read a blog post by Amanda Palmer on her wedding to Neil Gaiman, which was in the house of the writer Ayelet Waldman. So I started thinking about strong, creative women like Palmer and Waldman who do their own work, go their own way. And I wondered why it’s been difficult for me to do that at certain points in my life. I think it’s partly a result of growing up in the South, where there were certain things women weren’t expected to do. Create their own companies, for instance. Write best-selling novels. They were expected to support their families. To be nice, to avoid controversy.

It was a surprise, coming North for law school, to find that I was being treated differently – that I was expected to be as competitive as my male classmates. That no one cared whether I was nice or not. And you know what? It was liberating.

I’ll tell you two stories to illustrate what I mean. While I was in law school, I spent the summers working at law firms in Richmond, Virginia. In the South again. In those law firms, when we went to lunch, the men always let the women get into the elevator first. So, of course, all the women were at the back of the elevator. And then, when any women needed to get out, all the men would get out first, stand in the hallway until they got out, and then get back into the elevator. It was an elaborate and inconvenient ritual. And while it was meant to be courteous, it was also insulting, because it was a daily marker of difference: you might be an associate at a law firm, but you were still a woman. You were never just another human being.

The second is more personal. After I ended a relationship, the man I’d been in a relationship with decided that he could no longer speak with me, that it was too painful. And then he asked his best friend, who was also a friend of mine, not to speak with me either. And because of their relationship, his friend agreed. I thought for a long time about why that incident was so painful, and finally decided that it was because I had been treated, not as a human being, but as a woman. (Of course what I thought at the time was, are we in fifth grade? I was incredulous.) As a human being, I had a right to form friendships of my own. But as a woman, I was the one he had been in a relationship with, and that meant he had the right to ask male friends to end their own friendships with me. Yes, this too happened in the South.

It took me a long time to get past the lessons I learned, growing up in the South. To realize that I could be ambitious, could create the life I wanted for myself without asking anyone’s permission. That I could speak my mind, generate controversy. That, as the historian Laurel Thatcher Ulrich wrote, “well-behaved women seldom make history.” And that I had a right to want to make history, do something important. Change the world.

That, in fact, the world needed changing, and it was much more important for me to try to change it than be nice.

No wonder being treated as a human being, rather than a woman, felt liberating. (Although it was also, initially, disconcerting. I was not used to competing, to being in an environment where niceness got you exactly nowhere. Believe me, it counts for nothing at Harvard Law.) But I am inescapably both.

Women like Palmer and Waldman generate controversy. They make us talk about what it means to be a woman, and what it means to be a human being, and how to negotiate those two identities. And that is in part what I value about them and their work. I hope my own work participates, in some way, in that discussion.

I’m starting the year more tired than I would like to be. Here she is, tired Dora (if you look closely, you can see the lines under my eyes): 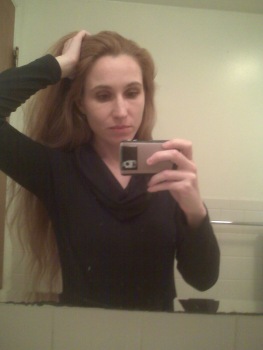 So I have a lot of work to do, simply on myself. Rest, become healthier. But I also want to work on all the projects I have planned. I’ll tell you about them as the year progresses. I think it’s going to be a particularly interesting one.

5 Responses to Being Human