Status report: This morning, I went to the university library to pick up some books and photocopy an article.  I wasn’t able to finish the footnotes to the second section of Chapter 2 yesterday, so I’m going to work on them tonight. And then tomorrow, I’m going to complete the second section and go on to the third section.  Once that’s done, later this week, there will just be the introduction to write.  And then, the entire dissertation will go together.  I will spend August making final revisions, and hand it to the committee on September 1st.  At least, that’s the plan.

But this afternoon I took some time off to show my friend Luke Taylor around the city. Luke and I first met when he was in middle school.  His mother was a friend of the family, and she knew that I was a writer.  Luke wanted to be  a writer as well, so she told him that he should talk to me about writing.  I still remember reading some of his earliest stories and writing him a recommendation for his first writing workshop.  He’s now a college student working on a degree in filmmaking.  We met up at the Boston Public Library and walked through Copley Square, which was once again holding a farmer’s market.  I particularly liked this booth with sunflowers.  Van Gogh would have liked it as well.

We walked through the Common.  Here you can see one of the swan boats, and the financial district in the distance. 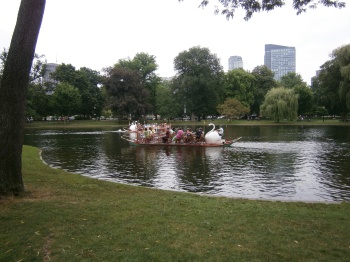 I’ve always liked this part of Boston, which reminds me of a European city.  Here is the bridge over the pond.

We walked across the bridge and through the park.  There are always musicians playing here.  In summer, it’s as though Boston becomes an enormous performance space.

I took a picture of these roses in full bloom.  At first I thought they must be hybrid teas, since that’s what you always see in parks.  But I smelled them, and they were almost certainly the David Austin English roses that were developed in the 1990s.  They smelled almost like roses should, although the David Austen roses don’t have the heady fragrance of the true old roses. 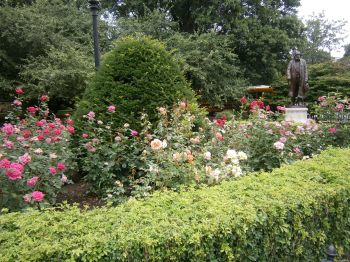 Lining the park are the brownstones Boston is famous for.  I put Miss Lavender’s School of Witchcraft in this neighborhood.  It seemed like the right place.

I should probably have gotten a better picture of the Capitol Building, but the streets were clogged with people and buses.  That’s what Boston is like in the tourist season.

We walked to Quincy Market, where there were more tourists and street performers.  I wanted to show Luke the touristy Boston, so he could at least say he’d see it. 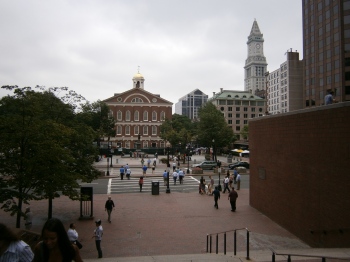 But then we headed across the river, to Central Square.  We had lunch at Asmara, the Ethiopian restaurant, and walked across the street to Pandemonium, the science fiction and fantasy bookstore.  I bought Stories, edited by Neil Gaiman and Al Sarrantonio.  It’s a book that’s trying to make a point, and I want to see what sorts of stories they’ve chosen to make it.  We walked down Massachusetts Avenue to Harvard Yard, which was also filled with tourists.  I miss the way it used to look when I was in law school, with elms like the pillars of a great cathedral.

Harvard was also having a farmer’s market.  I tried Kombucha, simply to say that I’d tried Kombucha.  It was all right.  But honestly, I’d rather just have tea. 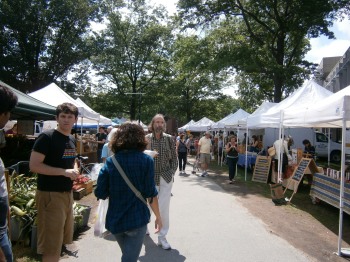 Of course we had to stop at Burdick’s for chocolate.  They have the most amazing pastries.  Honestly, the best I think I’ve tasted in the United States.  They taste like pastries you might buy in France, where pastry-making is an art.

Then we walked back to Harvard Square and stopped in the Coop.  I remember when it was very much the Harvard Cooperative Society.  Now, it looks more like an average bookstore.  (Coop is pronounced like a chicken coop, by the way.   Not like co-op.  At least, it was when I was at Harvard.)

We took the T to MIT, where we went into the MIT chapel, which was designed by Eero Saarinen.  It’s one of the loveliest, most restful modern buildings I’ve ever been in.  From the outside, it looks like a brick cylinder surrounded by a moat. 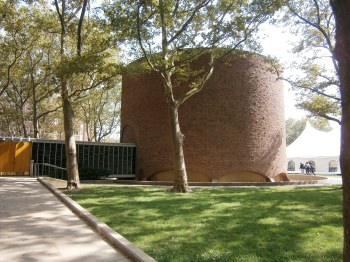 On the inside, it’s luminous.  What looks like falling rain is actually a cascade of metal rectangles that reflect the light.  The chairs are simple, almost like Shaker chairs.  It’s all brick, stone, wood, metal – and light.

Finally, we walked down to the Charles River.  The view from the river is one of my favorite views of Boston.

See what I mean?  We walked across the bridge from MIT to Boston, and then went into the Boston University bookstore.  Yes, our third bookstore of the day.

At that point we had seen downtown Boston and Cambridge, three universities, three bookstores, and a river. We were tired, and it was time for me to get back to work. But it was so nice to get out for an afternoon, show the city to someone who had never seen it before, talk about the differences between Boston and where we had grown up (since both Luke and I grew up in Virginia). Also, talk about the differences between writing and filmmaking, which was a fascinating topic.

Now I’m going to work on the second section of Chapter 2, as long as I have the energy. And I’ll be back at it tomorrow. When I get particularly tired, I remind myself that the world is still out there. It’s big and beautiful, and I will spend a lot more time in it. Soon.

2 Responses to Walking in Boston