A Train of Thought

I sat up late last night, watching a documentary on Christopher McCandless. I think it was a documentary called The Call of the Wild. There’s also a movie called Into the Wild, but I don’t think I want to see it. I don’t want the romanticization of McCandless’ life, which is what I assume the movie would be. It can scarcely avoid being anything else.

If you haven’t heard of McCandless, he’s the college graduate who spent two years traveling around the country, sometimes working, sometimes living off the land. He had read a lot of Thoreau and Tolstoy. Finally, he traveled up to Alaska, hiked into the wilderness, survived for 113 days, then died of starvation. His story was told in a book called Into the Wild, which was made into the movie.

There were several things that interested me about the documentary. First, McCandless was born in the same year I was, 1968. He came from my generation. Second, he came from the same place I did. He went to high school in Annandale, Virginia. I went to high school farther out, in Loudon. But we both came from the wealthy suburbs of Washington D.C. And I think in some ways we had the same response to it. He strikes me as someone who was looking, almost desperately, for the authentic. I remember feeling that way as well, and I think the area had something to do with it. We were all supposed to wear the right clothes. Go to the right schools. He went to Emory, I went to the University of Virginia (which was a state school, and therefore much less expensive, although one of the best schools in the country). He gave away the money set aside for law school. I had no money set aside for law school, and got through Harvard on grants and loans – mostly loans. (I repaid them in three years. That’s how much money I was making as a corporate lawyer.)

I think it took a great deal of courage to live the way he lived, traveling around the country. And a great deal of stupidity to go out into the wilderness unprepared. You can fight other men and win. You can’t fight nature.

But I understand and admire the search.

I was a girl, and obedient, and I did what I was supposed to do. He declined membership in Phi Beta Kappa. Of course I accepted. I went on to law school. And continued to do what I was supposed to do for a long time. And now I find myself at an age that is a mirror image of the age at which McCandless died: 42 rather than 24. Thinking about authenticity, about what life is, really, underneath everything we pretend it is. But I think my particular journey isn’t out there, but in here. It’s into my self, trying to figure out what is inside. Instead of driving, I write.

McCandless had with him a memoir by Louise L’Amour called Education of a Wandering Man, which contains an excerpt from a poem by Robinson Jeffers called “Wise Men in Their Bad Hours.” Here is the poem:

Wise men in their bad hours have envied
The little people making merry like grasshoppers
In spots of sunlight, hardly thinking
Backward but never forward, and if they somehow
Take hold upon the future they do it
Half asleep, with the tools of generation
Foolishly reduplicating
Folly in thirty-year periods; they eat and laugh too,
Groan against labors, wars and partings,
Dance, talk, dress and undress; wise men have pretended
The summer insects enviable;
One must indulge the wise in moments of mockery.
Strength and desire possess the future,
The breed of the grasshopper shrills, “What does the future
Matter, we shall be dead?” Ah, grasshoppers,
Death’s a fierce meadowlark: but to die having made
Something more equal to the centuries
Than muscle and bone, is mostly to shed weakness.
The mountains are dead stone, the people
Admire or hate their stature, their insolent quietness,
The mountains are not softened nor troubled
And a few dead men’s thoughts have the same temper.

And here is Jeffers reading it:

This is the sort of poem that poets write, assuming they are among the wise men. And we can criticize it for that, for being in a sense elitist and consolatory. And yet – it does not tell us that we are grasshoppers. We can choose to be among the wise men, or attempt to be wise men. We can approach life with strength and desire, at least attempt to make something more equal to the centuries than muscle and bone. And hope that our thoughts will endure, as the mountains endure.

I went into my own small patch of wilderness today, the Great Meadows Wildlife Refuge. I took these pictures: 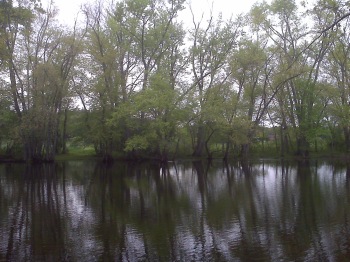 And here I am, in my small patch of wilderness, with the water and reeds all around.

This train of thought isn’t really going anywhere, to any great conclusion. It’s just what I was thinking as I walked along those trails, with the Purple Martins wheeling overhead.

1 Response to A Train of Thought