Would you believe me if I said that I was an introvert? Well, I am.

The truth is that most writers are, however much we go to conventions and live public lives, by which I mean lives that are, in significant part, lived online. I mean, if you were following my tweets, you knew what I was doing today, which was going to panels and giving a reading at Boskone. Even if you weren’t following my tweets, you could see all that information on my public Twitter page.

And yet, I’m an intensely private person, and I still have to mentally prepare myself for public events. Especially ones I’m doing alone, like readings. To be perfectly honest, I’m always worried that no one will come. (After all, why would they want to come and listen to me? Aren’t there so many more interesting people to listen to? So runs the mental script.)

I’m naturally a snail, and there is a process of mental bracing whenever I have to come out of my shell.

I do have one principle that helps, which I will call the Miniskirt Principle. If you have to do something frightening, do something else that frightens you at the same time. I have no idea why that helps, but it does. That is why, today, I decided to wear a miniskirt. There was something comforting about the dress I wore to Boskone on Saturday. I was Pre-Raphaelite Girl, and it floated around me, and there was nothing about it that worried me or made me self-conscious at all. But when I wear a miniskirt (and I rarely do), I’m always conscious of how I’m moving. And sitting, of course. Partly because it’s just, you know, short. But partly because, like every woman, I have a least favorite part of my body, and that least favorite part is my legs. I naturally have the sort of body that makes someone a good gymnast or dancer, and I did actually take both gymnastics and dance as a child. Which means that my center of gravity is low, and I have proportionally short, muscular legs. They’re perfectly functional legs that routinely take me up five flights of stairs, for which I’m grateful. It’s just that, if I’m self-conscious about anything, it’s them.

It’s as though, by choosing to wear a miniskirt, I announce to myself and the world that I am FIERCE. And then I stride along fiercely, and I go to my panels fiercely, and do my reading fiercely.  So there you are, the Miniskirt Principle: if you’re frightened of doing something, do something else that frightens you at the same time.

Here is a photograph of me in a miniskirt, ready to go to the convention. (But notice that I’m artfully standing so as to minimize my legs. I’m FIERCE, but I’ve learned how to pose for photographs . . .) 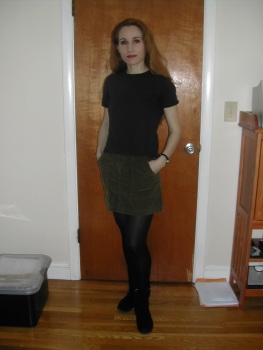 So how did the reading go? I think it went very well. I was worried that no one would come, so this morning I tweeted that the first five people who came would get free copies of my short story collection. I had the largest crowd I’ve ever had for Boskone, although I don’t know if that was why. And I had a chance to catch up with Brett Cox and Alex Irvine, who both came. I read part of “Pug,” which is coming out in Asimov’s this summer.

I also had two panels today.

Wikipedia says, “Described as a subgenre of mythic fiction, Catherynne M. Valente uses the term “mythpunk” to define a brand of speculative fiction which starts in folklore and myth and adds elements of postmodern fantastic techniques: urban fantasy, confessional poetry, nonlinear storytelling, linguistic calisthenics, worldbuilding, and academic fantasy. Writers whose works would fall under the mythpunk label are Valente, Ekaterina Sedia, Theodora Goss, and Sonya Taaffe.” And what do WE say?

This is a difficult panel to describe. So many things were said, and some of them were “The Wasteland” and “Cyberpunk,” so you can get a sense of the territory that was covered. I particularly liked two lines of Michael Swanwick’s: “I’m Michael Swanwick and I’m one of the most interesting fantasists writing today,” and “I sit here vindicated.”

He also, in the nicest and most supportive possible way, called the Mythpunks “Young Madwomen,” which I think is a wonderful designation that should immediately be adopted. We should have a sort of Young Madwomen’s Club.

We also talked about modernism and postmodernism. Greer said, “The impulse of modernism is to make cathedrals,” and Greg added that postmodernism capers in the ruins of those cathedrals. Which I thought was an excellent description.

Perhaps the most interesting thing about this panel was telling Greer how incredibly influential she had been among the female fantasy writers of my generation, and having her look completely surprised. So this is for you, Greer Gilman and Carol Emshwiller and Kelly Link: you influenced an entire generation of women fantasy writers. (Although Kelly is actually part of our generation. But she started earlier than most of us.) You showed us what we could do, how we could write, and we found it incredibly liberating. Now you know!

Second panel: A Child’s Garden of Dystopias – the Boom in Nasty Worlds for Children

Why do dystopias and YA literature seem to go together? Are YA dystopias more common now than previously? Are there differences between YA and adult dystopias – perhaps a different ratio of cynicism to hope? How does “if this goes on” fit in?

By the time I got to my last panel, I was very, very tired. Also, I knew less about this subject than any of the other subjects I had talked about. I thought it was a very good panel, and I particularly liked Kelly’s image of dystopic YA novels as scratchboards: they look black, but once you scratch the surface, all the colors are underneath. And I think Bruce Coville had an important point about the fact that teens today are going through a sort of spiritual crisis, trying to figure out where meaning is going to come from in their lives while living in a culture that defines them as consumers. I think that’s very true.

I had some time after the final panel to make my rounds and say goodbye. Here are Brett Cox and Kelly Link, in the general area of the Small Beer Press table:

I also had a chance to catch up with Steve Pasechnik, who helped me pick up my art. I always buy some art at Boskone, because it has one of the best art shows. I bought two limited edition prints by Omar Rayyan, “Acorn Brandy” and “Oh So Huggable.”

I also had a chance to look at the pile of original paintings and drawings on his table. They were stunning, as always. But I’m grateful that he has prints available, because those are what I can afford. There is something so democratic about prints. They’re different from originals, of course – there’s a different feel to them. But they do allow me to surround myself with beautiful things. Like drunken squirrels!

I also bought another limited edition print by bidding on it in the art show. It’s called “By the Pond” and it’s by an artist named Lubov. This isn’t the sort of art I usually buy, but I loved the colors, and the precision of the flowers and leaves.

To photograph these paintings, I just propped them up against a pillow. If you want to see better images, look here: “Acorn Brandy,” “By the Pond.” (I haven’t found an image of “Oh So Huggable.”)

(Note to the artists: my understanding is that, because I’ve purchased these items, I can photograph them and post the photographs on this website. But if you would prefer that I take them down, I will of course do so.)

The convention is over, and it’s time for me to go back to work. I’m so glad I went, and also very tired. Time for the snail to crawl back into her shell for a while. (Even though at this point, it’s a rather public shell.)

8 Responses to Being a Snail