All right, here are my Boskone pictures from Saturday. There are quite a lot of them, so I’ve put them together in pairs to save space.

The first two are of me dressed for the convention and a display of weapons by the Higgins Armory Museum.  Someone complimented me on this dress, and I said that I had bought it at the thrift shop where all the Pre-Raphaelite models bought their clothes.

Here is one of the demonstrations put on by the Higgins Armory Museum, as well as a general shot of the room where all sorts of events took place. There were tables where people could sit and snacks of various sorts.

This was the dealer’s area. There are not as many booksellers at Boskone as I’m used to from Wiscon or Readercon, but there are all sorts of other things, jewelry and scarves and of course art. (The actual art gallery was in a separate area that I did not photograph because of copyright issue. I don’t want to reproduce the work of any artist without permission.)

I bought an oat cake at the Tiptree Bake Sale and then went over to the Small Beer Press table. Here you see Gavin Grant, his daughter Ursula, and Michael DeLuca. 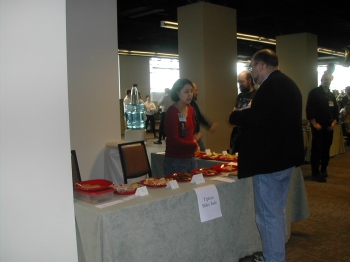 Genevieve Valentine was talking to some friends in front of the Small Beer Press table. Unfortunately, a fight broke out. 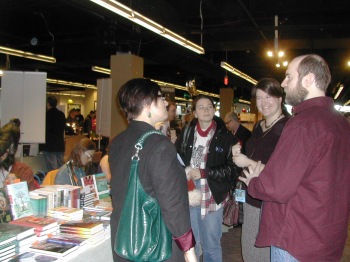 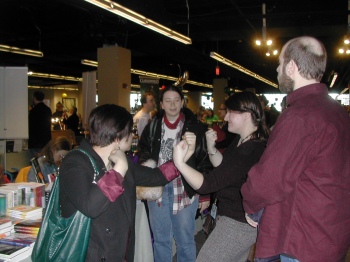 Here are the Clarkesworld table with Neil Clarke and the Broad Universe table with Elaine Isaak. (Elaine is a fellow Odyssey graduate, although she attended a few years before I did.) 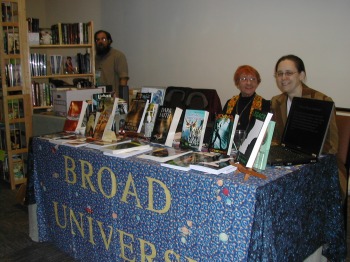 One of my favorite tables is always Omar and Sheila Rayyan’s. Their art is stunningly beautiful. I have several of their prints, and even an original drawing that I bought last year.  (It was a serious splurge.)  Sheila kindly gave me permission to photograph. 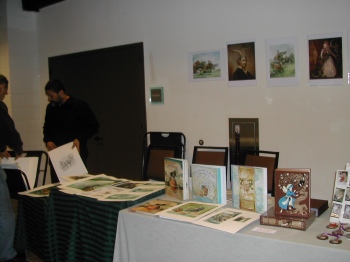 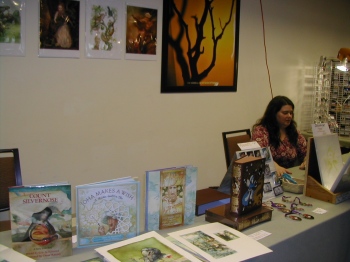 A new artist this year was Kelly M. Kotulak, who makes jewelry that has a recurring theme of eyes and keys. I found it fascinating. I asked for her card, and she gave me one for Studio Hibernacula. Visit her site: it really is gorgeous. 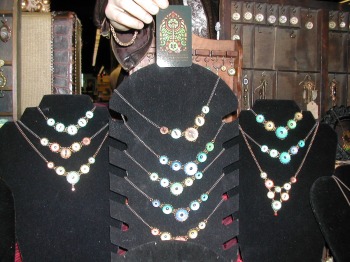 The necklace on the left is one of Kelly Kotulak’s. The table on the right is Laurie Edison’s. If you’ve been to any of the major conventions, you’ve seen Laurie’s stunningly beautiful jewelry, based on natural forms.

I went to a joint reading by John Langan and Genevieve Valentine, and later in the day I went to dinner with them and a group of friends. We went to a Mexican restaurant that had opened recently, and was located reasonably close to the convention hotel. After dinner, Genevieve, Neil Clarke, and I went back to the hotel for coffee and dessert.  Genevieve and I shared a crème brûlée. And then it was time for me to go home. The only problem with living so close to a convention is that I can’t justify the expense of staying at the convention hotel, so I have to go home every night, missing the parties. But that’s all right. There will be plenty of parties at ICFA, Wiscon, and Readercon. 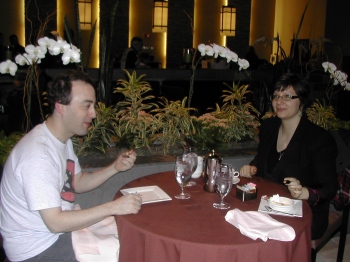 And finally, I think these t-shirts prove exactly what I said in the H.P. Lovecraft panel. Cthulhu is everywhere. We’ve domesticated him. Just wait until he wakes up and finds out that people are knitting him and putting him on t-shirts. He’s going to be seriously upset. 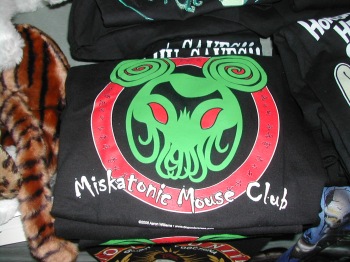