I think I have two addictions: chocolate and books. The book addiction is definitely stronger. I can live without chocolate. I’m not sure I could live without books.

Recently, I was waiting for my flight from Budapest to Zurich to Boston. I had two books in my carry-on bag. One would not be enough, because what if I did not want to read that book? So I packed two. Then, in the airport, I went into the bookstore and bought another book, because what if I did not want to read either of those books? The thought made me anxious, so of course I bought a third book, just in case — at the ridiculously inflated airport bookstore price. During the flight, I ended up doing what I always do, which is watch movies — the sillier the better. This is how I have watched The Lost City and John Carter of Mars, on small Swiss Air seatback monitors. But those books did come in handy during the Budapest to Zurich flight, which had no seatback monitors, and while we were taxiing in Zurich and there was no movie to watch, and during the metro ride home from the Boston airport. So I made the right decision. Right?

Even the act of walking through a good bookstore is soothing. So many books! So many stories! So many possibilities — not just to read, but to be for a while, because when I am reading a book, I am being in that book. I am getting to live a different life. Recently, I traveled to the Himalayas with Jamaica Kinkaid and met Miss Jean Brodie in her prime with Muriel Spark. In between, I solved a case with Hercules Poirot, but I’ve done that many times before. (Agatha Christie may be my ultimate emotional support author. Or is that Jane Austen? Or C.S. Lewis?) I have been to islands off the coast of Finland with Tove Janssen. I have gone both back and forward in time. (Maybe it’s Ursula Le Guin?) I have learned about writing, gardening, Zen, art in nineteenth-century Vienna, renovating a villa in Tuscany.

It may seem as though I’m making light of serious addictions by calling this my addiction, but it accomplishes the same thing: buying a book is a sort of “hit.” It makes me feel better, it soothes anxiety, it creates the same sense of pleasure and possibility. Within the covers of each book are dreams in which I can participate, alternate realities, even alternate personas that I can inhabit. Books are safe hallucinations. (Well, sometimes safe. Sometimes not safe at all when those hallucinations cross over into our real world, when we begin to believe in fantasies — I’m thinking here of politics.) Words are powerful, as powerful as drugs.

I don’t have any sort of deep message here, except perhaps one of solidarity with those of you who are also inveterate readers. Who also wander around bookstores in a sort of daze, wishing you could buy so many of the books on the shelves — the way you might wander around an animal shelter, wanting to take home all the puppies. Or around the garden center, planning to buy plants as though you had a hundred acres and a landscaping crew. For whom libraries are sanctuaries and sacred precincts, but who also want your own books, on your own shelves (there are never enough shelves), even if you don’t have enough time to read them, because each book is a different life you can live, a different possibility you can experience. That’s the closest we can get to immortality.

Excuse me, this evening I’m due to depart for Italy with Elena Ferrante, and I must start packing . . . 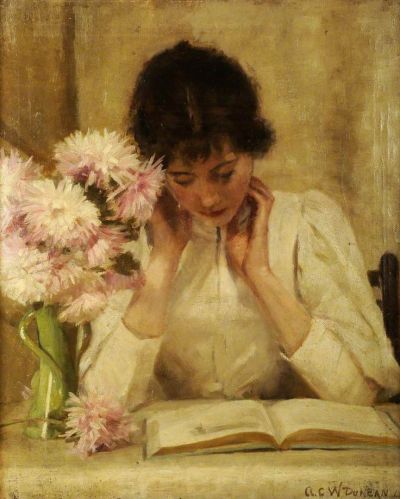 (The image is The Reading Girl by A.C.W. Duncan.)

9 Responses to Addicted to Books