There’s nothing quite like burnout to make you reevaluate your values. Depression can do it, but depression is a more passive state, I’ve found. Depression makes you sad. Burnout makes you angry. It makes you blazing mad, like a hot fire — furious at the world because it keeps asking and asking, and you’re running out of time and attention and energy to give. So of course, after realizing that I was burned out (see my post from last week), I started to reevaluate what was truly important to me, what I wanted out of life.

One of the wonderful things about becoming known as a writer is that you’re invited places — to read, to teach, to present. I was getting a lot of these invitations, and I was accepting a lot of them. At one point I realized that I was doing several events each month, which is a lot if you factor in that I was also teaching full-time, so the only free time I had was on weekends. And I was traveling to an event at least once a month, usually out of state, which meant at least a two-day commitment: one day to get there, one day to return. Although more usually it was three days, to go, appear, and return. And you’re invited to write things, essays and stories and poems, which can be wonderful, but it also means you have to practice saying no a lot, because you simply can’t do everything. At least, that’s what I eventually learned: you have to exercise your NO muscle. (If you’ve been reading this blog for a while, or following me on social media, you’ll know that I have a daughter. Traveling so much was also taking away time I could be spending with her.)

So how did I start to reevaluate my values? To be honest, it started with the totally practical realization that I was spending more money traveling to events than I would probably ever make from them. Most of the time, when you’ve invited, it’s your responsibility to pay for travel and accommodations. At most you’re offered free membership, which means you don’t have to pay to attend the event . . . although sometimes, as for the big science fiction and fantasy conventions, you do in fact have to pay even when you’re part of programming. This is so accepted in the science fiction and fantasy world that I mention it here because many readers — most readers, really — are not part of that world. It’s also part of the world of academic conferences, but that world operates on a different funding system — universities pay for professors to attend conferences as part of their professional development. If I go to an academic conference, I can request funding. Not so for conventions, literary festivals, etc. Many readers don’t realize that when writers attend these sorts of events, they are paying to go — often quite a lot. And yes, those expenses are deductible against writing income, but that just means your taxable income is lower. It doesn’t mean you’re recouping the money.

My realization was that although I loved meeting readers and other writers, and inevitably got something valuable out of these events, I also lost something — time, energy, and of course money I could have spent elsewhere. The big conventions, like the World Fantasy Convention and the World Science Fiction Convention, can cost more than a thousand dollars to attend, if you have to travel far. I don’t know about you, but a thousand dollars is a lot of money to me. Like, a LOT of money. And I can think of many different ways I could use that money, including leaving it in the bank, where I could look at it sitting in my savings account and enjoy the sense of peace and contentment that comes with having emergency savings. (I was a graduate student for many years, so I know very well what it’s like to have no savings at all . . .) What was truly worth doing? Where could I spend my money and energy most wisely? Those were the sorts of questions I started asking myself.

And then, there was the issue of time. I have a limited amount of time in this world (so do you, but we won’t go into that — let’s just accept it as a given and move on). What would I like to spend that time doing? What do I really enjoy doing? I had to start thinking about that . . .

Well, I know that I enjoy writing, because I’ve done it all my life, at least as long as I can remember. And I do it whether or not anyone reads it, whether or not anyone pays me for it. Actually, while I love being paid for my writing (see savings, above), the writing I love doing most is the kind no one pays me for, like writing in a journal or posting poetry for free online. I do it for the sheer joy of it. I like writing more than I like being an author. And I know that I enjoy teaching, because even now, in summer, in Budapest, I have the textbook I’ll be teaching from this fall, and I’ve been reading the essays I want to teach . . . they’re all on fairy tales, and I’m so looking forward to exploring those stories again with students. And I love traveling, but the kind of traveling I love has nothing to do with expensive hotels, or fancy restaurants, or seeing tourist sights. My best memories of visiting Cornwall, last summer, were buying a cheese and chutney sandwich at Tesco and eating it in a beautiful old park under the trees (until a dog ran up to me and stole the other half from my paper bag), or walking in the ocean over the causeway to St. Michael’s mount, with waves lapping at my bare feet, or even doing laundry in a laundromat in Penzance, using pound coins. (No, I didn’t see any pirates. Only witches — I had my fortune told at a witch festival, and that was also one of the unexpected highlights.)

What I really love doing are the ordinary things. Waking up and having breakfast. Reading a good book. Walking through parks and gardens. Going to the sea, or a lake, or a river. I don’t know why water always makes me feel better, but it does. I like how rocks and shells look, all different. I love wildflowers, especially in meadows. Trees make me happy in all sorts of ways: the sound of wind in treetops, the crunch of dry leaves in the fall. So do a beautiful pair of earrings or a comfortable, flattering dress. A worn pair of Keds. A long, deep sleep makes me very happy. Halloween. Cats. Mushrooms.

What makes me unhappy? Hotels, when they become not a special treat but a way of life. Most airports. Large cities where I can’t see the sky. Our political system right now, which is an almost endless parade of greed and cruelty, tempered only by stupidity. The relentlessness of social media, which I as a writer am supposed to be on. (Yes, there are lovely people as well as lovely things on social media — I try to maximize them.) Yesterday, I spent several hours walking through an IKEA on the outskirts of Budapest, and in a way it was useful — I was able to identify some furniture I needed. But it seemed to me, in that cavernous labyrinth of fold-out sofas and bathroom fixtures, that human beings aren’t meant to live like that. They’re not meant to live in echoing, windowless caverns of consumer goods where one begins to think, not in a good way, about the myth of the Minotaur and long for Ariadne. I will admit that I got a little lost around the cafeteria, and started to wonder if I would ever get out, or stop smelling meatballs.

What do I actually value? That was the question that kept me pondering and wondering and reevaluating. What do I value in my life as a writer and teacher? What do I value in my life as a human person? How do I want to spend my time, and also my money, which is essentially a paper symbol of my time, since I get it by spending my time working? I’m still in the process of answering this question, but if I spend less time being an author and more being a writer, if I focus on the things that really matter to me, if I avoid IKEA unless I absolutely need to descend into those cavernous depths marked Abandon Hope All Ye Who Enter Here, you’ll know why. I’ve got one life, and I want to live it fully.

Writing these blog posts is part of reevaluating my values, because this is the sort of writing I like best, just me to you, and you can read it or not as you wish. And you don’t have to give me anything for it, just your attention for a little while — I do it for the joy of talking to you, of telling you what is on my mind. And it’s a relief to me, to get out all these thoughts that occupy my head, about how we are living and how we should live. If I can figure out how to live well, and I can write about that . . . well, that might provide some sort of service. Because aren’t we all trying to do that, each in our own way? 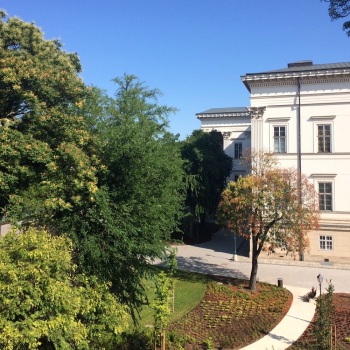 (This is one of my favorite views in the world, from the window of the apartment in Budapest where my grandparents lived, and where I lived as a child until we left the country. Of all the homes I’ve had in my life, it’s the only one I can still return to. This view is one of the things I value.)

11 Responses to Reevaluating Your Values