How We Live Now

I’ve been anxious and stressed for several weeks now. One reason, of course, is the election. Another is that I simply have so much work to do this semester — it’s been overwhelming. The world seems darker than it did, and life in it seems more difficult, less certain. It feels as though life is one never-ending cycle of work and worry — as though this is all there is, and all there ever will be until, well, death I suppose. Last night I could not get to sleep for hours. When I finally did get to sleep, I dreamed that I was on an island, looking for a house, and first I could not find it, second I did not have the key, and then I went for a swim in the ocean and worried about drowning. I don’t think we need Freud to interpret that one! In terms of the political situation, I have not felt this particular sensation since before the Berlin Wall fell — I still remember what that was like, when I was a teenager. Suddenly, the world felt more free. Now, suddenly, I’m worried that it will become less so.

When I’m not sure what to do, how to live, I give myself principles to live by. I find they help because, no matter what happens in the world outside me, at least I know what I should do in response. At least I can control the world inside myself, to some extent. I thought about how we live now, how we should live now. Really, this is no different than what I would have written a month ago, a year ago. But now, I think, it may be particularly helpful. Here, then, are some principles for living in our difficult, complicated world:

1. Don’t be evil. Don’t condone or collaborate with evil.

This isn’t really that complicated. Don’t hurt people. Don’t exploit them. Don’t treat them as though they were less important, less worthy of respect. Don’t lie to them. This may seem overly simplistic, but if people refrained from being evil, from participating in or condoning evil — from abusing each other, exploiting each other for profit — I mean, that would be a very different world, wouldn’t it?

We may disagree in some cases about what constitutes evil, but I think in most instances, most people will agree: Allowing children to drink water tainted with lead is evil. Stealing employees’ wages is evil. Making a racist joke is evil. (Yes, words can be evil, and they can create the conditions for evil acts.)

All this requires is negative action — don’t do it.

2. Do the most good you can, to the best of your ability.

This requires positive action — figure out what you can do, and do that. Help to the best of your ability, whatever that is. Is it donating money to an organization that fights for social justice or helps the needy? Is it doing something directly yourself to help another person? Is it doing your job well and honestly? Is it taking care of one child, one animal? Well, do that.

Figure out what you can do, make a plan, and do it. And then keep doing it.

3. Take care of yourself, because you matter.

You’re not going to do anyone any good if you don’t take care of yourself. You know this, right? Do the best you can to make sure that you’re staying healthy, and that your bills are paid. By extension, take care of your family and your home. You’re not going to be effective in the world if you’re stressed, tired, overwhelmed. (These are words I try to remember, when I myself am stressed, tired, overwhelmed — as I am now.)

Taking care of yourself is not selfish or a cop-out. It’s a necessary precondition for (1) doing good and (2) not being evil. It’s much easier to do, and not do, those things when you yourself are well.

And by the way, accept that you will sometimes fail at the things I’ve listed above, as you will fail at anything you do. Pick yourself up and try again.

4. Live as though the world you wanted to live in already existed.

Imagine the world you want to live in. For me, it’s a world where we are all more environmentally conscious, where we support the arts and cultural institutions, where everyone is valued. So, you know, I try. I take public transportation, I buy organic produce, I try to recycle. I buy yearly memberships to the art museum. I splurge on the ballet, because I want to live in a city with a ballet. I subscribe to newspapers I want to make sure survive. I try to be a good, effective teacher — fair to my students, kind but also challenging them to write better, think more deeply.

These things also make me feel better: they make me feel as though at least I’m doing something, not simply accepting things as they are. Because, and this is the last thing I’ll say, no one person will save the world. Trust me on this: no one is coming out of the sky to make this world better. We all have to do it ourselves, one small gesture at a time. But those small gestures add up to something much larger, which is the whole point. 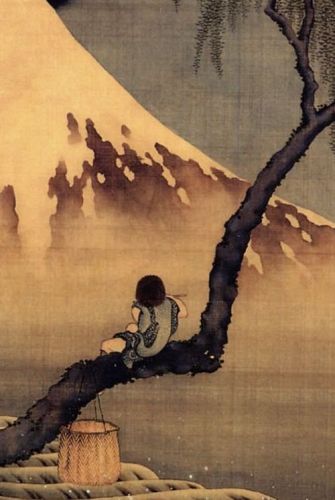 (The print is by Hokusai. I thought it captured the feel of what I was trying to say here . . .)

9 Responses to How We Live Now