I’ve been working on a project of mine: Poems of the Fantastic and Macabre. It’s an online anthology of poetry with fantastical elements, from as far back as poetry has been written in what is identifiably “English.” It goes all the way from medieval ballads of the thirteenth and fourteenth centuries to modern poetry, by which I mean poetry of the early 20th century. Since the semester ended and I’ve had a little more time, I’ve been adding poetry, and I’ve also updated the design of the site. I’m going to keep working on it, because this is very much a long-term project. I’ll keep adding poets and poems when I can.

Recently I added a poet that particularly interested me. Her name is Ruth Mather Skidmore, and she wrote this poem:

I think if I should wait some night in an enchanted forest
With tall dim hemlocks and moss-covered branches,
And quiet, shadowy aisles between the tall blue-lichened trees;
With low shrubs forming grotesque outlines in the moonlight,
And the ground covered with a thick carpet of pine needles
So that my footsteps made no sound, —
They would not be afraid to glide silently from their hiding places
To the white patch of moonlight on the pine needles,
And dance to the moon and the stars and the wind.

Their arms would gleam white in the moonlight
And a thousand dewdrops sparkle in the dimness of their hair;
But I should not dare to look at their wildly beautiful faces.

Isn’t it beautiful? I found it in an anthology called Poems of Magic and Spells, which sent me back to Walter de la Mare’s anthology Come Hither: A Collection of Rhymes and Poems for the Young of All Ages, which send me back even farther: to an anthology called Off to Arcady : Adventures in Poetry, published in 1933. I very much wanted to include it, but I knew nothing about the poet. And at a minimum, I needed to know when she had been born and when she had died. I needed those dates for the table of contents.

So I went to the internet, expecting to find something. Not necessarily a biographical entry, but something . . . after all, the poem is accomplished. She was obviously a talented poet — surely she had published something else. But for the first time, researching poets for my online anthology, I drew an almost complete blank. She had not published anything else. And she, herself, appeared almost nowhere. I found exactly one reference: in a photocopy of the June 13, 1934 Vassar Miscellany News, I learned that she had graduated from Vassar that spring. Was it the same Ruth Mather Skidmore? There could not be two — the name was too unusual. So I had one small piece of information. I searched again, using various forms of her name, and came across another photocopy. This time it was a page from a local newspaper paper published in Castile, New York called The Castilian, which recorded the social activities of prominent residents. A Mrs. Ruth Mather Skidmore Remsen had visited her mother, Mrs. Ida Mather Skidmore. This must be the same Ruth? And Remsen must be her married name. I couldn’t find the exact date of the newspaper, but it had been printed sometime between 1942 and 1945. On the same page was a list of the specials at Hubbard’s Clover Farm Store: five pounds of cane sugar for 34 cents, a pint of Leadway Floor Wax for 29 cents . . . An advertisement reminded you to Buy War Bonds and Stamps. I was beginning to build a history.

So I searched again, this time for Ida Mather Skidmore, thinking that if I could finedinformation on the previous generation, I might be able to find Ruth’s birthdate. Under her mother’s name, I found an obituary for Ruth’s brother, which told me that he had been predeceased by a sister, Ruth Remsen. So I had been right, that must been her married name. I tried Ruth Remsen as a search term, but there were too many women under that name. I did find an obituary for a Ruth S. Remsen in 2002, but could it be her? I didn’t know. And then I got lucky: I found a wedding announcement for Remsen-Skidmore in The Daily Brooklyn Eagle for July 16th, 1939 — again, a photocopy. That announcement gave me the most information I had found on Ruth Mather Skidmore. Her father had been a Harry B. Skidmore of Elizabeth, New Jersey, and he was described as “the late.” She was a graduate of Vassar Collage, and had spent her Junior year at the Sorbonne. After college, she had gone on to get a Master’s degree at Teachers College, Columbia University. The day before, July 15th, she had married a man named Alfred Soule Remsen, Jr., the son of a Mr. and Mrs. Remsen who lived in Jamaica. He had graduated from the University of Michigan. There was a whole story there, one I wasn’t going to learn more about. Because there was nothing else, at least not online.

I had enough information to call the Vassar Alumni Association, which confirmed that Ruth Skidmore Remsen had been born in 1913 and had died in 2002. And that’s all I know about Ruth Mather Skidmore, the college student whose poem “Fantasy” was published the year before she graduated from college. Who was she, this girl who dreamed of the fair folk in a forest glade? Who wrote at least one fantastical poem, and then . . . nothing else? I have no idea. Perhaps there are more poems somewhere that were not published. Girls who write poetry tend to write more than one, and “Fantasy” is the product of a talented hand and mind.

As far as I can determine, given the confusing state of copyright for poems published around that time, the poem is out of copyright. (If I find that it’s not, I’ll have to remove it or find a descendant who can give me permission.) I’m glad I can reprint it, and that is after all the point of the anthology — to bring attention to poets and poems who may have been forgotten, who may not be getting the attention they deserve. And of course to highlight the long history of fantastical images and themes in poetry.

I’m pretty sure part of what I’m here for is to bring attention to the literature and writers I love. It’s not just about writing — it’s about allowing people to see the world in a different way, whether that is by writing my own poetry or researching and publishing one forgotten poet who wrote at least one wonderful poem. 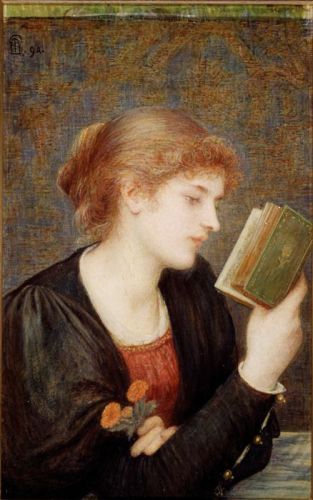 I chose this painting to represent the woman poet. It’s by Marie Spartali Stillman (1844-1927), who would have been alive at the same time as Ruth Mather Skidmore. It’s important to remember the woman artists too . . .

10 Responses to A Forgotten Poet