Once upon a time, a long time ago (specifically, while I was in college), I took a poetry class. It was my introduction to the fact that taking a class with a Famous Poet doesn’t mean it’s going to be any good (it wasn’t). And that’s where I first heard the phrase “God is in the details.” I’m not sure where I heard “The Devil is in the details,” which I suppose is a sort of companion phrase. They both essentially mean the same thing, which is that details matter. (In my poetry class, the professor meant that the poem is in the details, which is both true and not true. He was referring to the small descriptive details that are at the heart of modern free verse. But the poem is also in the details of rhythm and rhyme.)

I was thinking of this last night, because it was the first night in about two weeks when I haven’t been working (frantically trying to finish the tasks of the semester). And instead of going straight to sleep, which is of course what I should have done, I stayed up to sew cherry red bobbles on my lampshade. Because decorating is also in the details — if the details aren’t there, aren’t right, you haven’t decorated at all. You’re just arranged furniture.

There is a sort of rule that I’ve been hearing about, mostly from business people: since 20% of your effort goes into achieving 80% of a task, and the remaining 80% goes into achieving the final 20%, you should focus on achieving that first 80%. As for the rest, “the perfect is the enemy of the good,” right? I suppose there’s nothing wrong with thinking that way, or acting on it, in certain industries. But there are places where the difference between 80% and 100%, or even 90% if you can’t get all the way there, is huge. Is everything.

One of those places is the arts. The difference between an artist giving 80% and 100% is the work of art itself. You can tell a painting, a novel, that isn’t at 100%. Where the artist or writer said, “that’s good enough.” What makes an artist great is knowing where 100% is, and doing his or her best to get there. Maybe not achieving it — probably not achieving it, because who are we kidding, art is hard. But trying anyway.

When I’m decorating, I add the bobbles. (Which I love in part because they’re slightly ridiculous, as though my lampshades belonged at a circus. This morning, I added bobbles to the other lampshade. Now I have two lampshades with red bobbles, like circus clowns.) When I’m writing, I sweat over the commas and semicolons. The novel I’m writing — I’ve read the entire manuscript out loud to myself, to hear what the sentences sound like. Over the next few days, I need to go over it one more time before sending it to Important People. Just to make sure there aren’t any stupid mistakes.

As I said, I suppose there are places where 80% is enough, and you can let the other 20% go. But not the spaces I work in: not in teaching, not in writing. And it’s not a way that I particularly want to live, because I care about the details, about getting to 100%. And there’s another saying that I’ve always remembered: “The way you do one thing is the way you do everything.” I think that’s often true: people who are conscientious in one area tend to be conscientious in other areas as well. I know it’s true for me: the better I get at one thing, the better I get at others. It’s as though each thing I do is a learning process. Putting red bobbles on my lampshades provides a lesson about writing, about teaching. About living.

Because in the end it’s about how we live, isn’t it? In the end, everything is. And everything can provide lessons. Even time spent sewing on red bobbles . . . 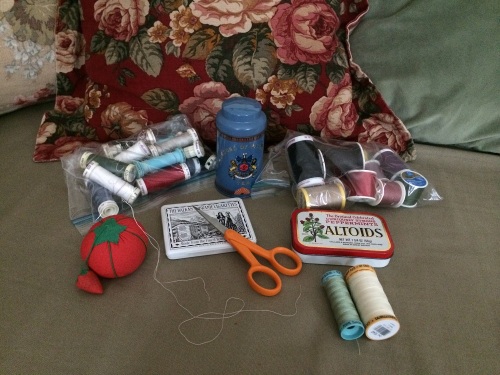 The photo above is from this morning: some of my sewing supplies scattered on the daybed in the living room, where I was working. The cigarette tin holds needles, the tea tin holds buttons, and the old Altoids tin holds my pins. The photo below is one of my lampshades, the one next to the Christmas tree, with red bobbles. 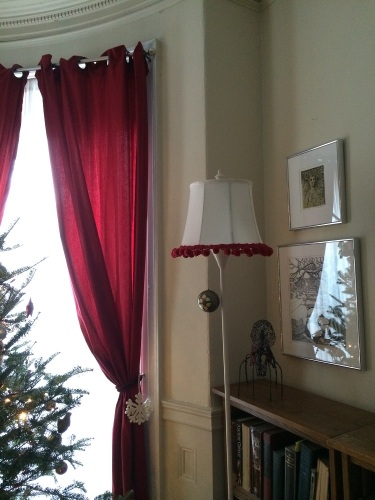