I posted a picture of my Peach Clafoutis on Facebook, and people asked me to share the recipe, so here it is! I’m interrupting my series of blog posts on fairy tale heroines and their journeys to bring you a little snack . . .

First you should know that I don’t use white flour or sugar, because I’m trying to eat more healthily, even when eating desserts! If you want a standard clafoutis recipe, there are many available on the internet. This is a slightly healthier version. I’ve found that you can use whole wheat pastry flour to substitute for white flour, but it is more absorbent, so you typically need less of it. I also use the brownish sugar that is usually labeled “organic sugar” and is a little less processed than the white variety. It can be used just like white sugar, but it has a flavor of its own, a bit more caramely than white sugar. So the flavor of whatever you make will be a bit stronger.

This is a good time to preheat the oven to 350 degrees.

Clafoutis, the way I make it, is basically a thickened custard over fruit. I’ve seen some recipes in which American cooks describe it as a baked pancake, but I think that means they’re using way too much four. It should taste like a custard.

Here are my ingredients for the clafoutis:

For the fruit, cherries are traditional. I like peaches. You can also use strawberries, blackberries, and probably raspberries, although I’ve never tried the raspberries myself. In winter especially, when fruit are so expensive, I use frozen fruit, thawed and drained. (The juice will change the consistency of the clafoutis, so drain as much as possible.) When I’m using frozen fruit, I add a tablespoon of sugar to the fruit, because otherwise it tends not to be sweet enough.

Take a baking dish, preferably a pretty one (like the glass pie dish I used here) because you may serve the clafoutis in it. Butter it and then put the fruit on the bottom, arranged however you wish, but in a thin layer.

Assembling the clafoutis is incredibly easy. Just mix all the ingredients except the fruit, starting with the solids and then adding liquids while mixing so it’s not lumpy. I use a hand-held electric mixer.

Then you just pour the clafoutis mixture over the fruit.

Bake in a 350 degree oven until it’s done, which depends on your oven, so I won’t try to give you an exact time. If you’re used to baking, you know there’s a moment when it smells so good, and that’s just before it’s time to take the clafoutis out. Then there’s a moment when you think, I can’t smell it anymore, and that’s it, that’s usually the time. The clafoutis is done when the top is golden brown. 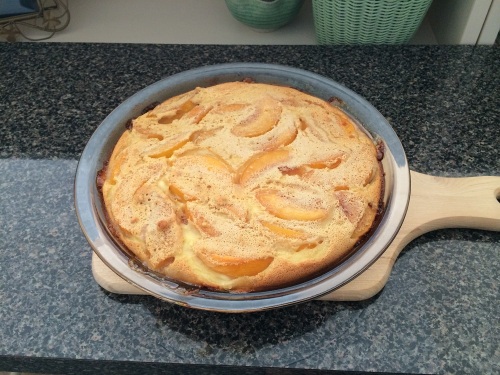 It’s best to let it cool a little bit, but warm clatoutis is a wonderful treat, and it’s just as good cold the next day. Some people sprinkle powdered sugar on top, but I think it’s quite sweet enough as is, so I would only do that if serving it at a party. And here you go, a bowl of Peach Clafoutis!