First, I heard Elizabeth Gilbert say, in an interview, that according to Joseph Campbell there was no such thing as a heroine’s journey, because the heroine did not need to go on a journey: she was the home to which the hero returned. I can imagine Campbell making such a statement, but the evidence in his own book, The Hero With a Thousand Faces, contradicts it: he repeatedly describes heroines on journeys, including Ishtar descending into the underworld. Some heroines have gone on journeys; therefore, the heroine’s journey must exist.

Second, I tried to do some research on the heroine’s journey, and what I found seemed too complicated: it didn’t match up with the journeys I was seeing in the fairy tales I teach.

So I decided to write out a heroine’s journey based on the fairy tales I’m most familiar with. Here’s what I came up with. I describe each step, but sometimes the steps occur in a different order, so the chronology may differ from tale to tale. And not every tale has every step. And not every tale is a journey tale! But when the heroine is on a journey of some sort, this is basically what it looks like:

1. The heroine lives in the initial home. This can be Snow White’s Castle, Cinderella’s house, or the poor cottage where we first encounter the lassie in “East o’the Sun and West o’the Moon.” It’s a place of stability, where the heroine is happy and safe. Usually, it’s the place she spends her childhood.

2. The heroine receives gifts. Sleeping Beauty receives gifts from the fairies, Cinderella from her fairy godmother or alternatively the spirit of her dead mother in a hazel tree. Donkeyskin receives dresses from her father. Sometimes receiving gifts comes before she leaves the initial home, and sometimes after.  The lassie receives the golden apple, comb, and spinning wheel after she has lost the temporary home and been left in the dark forest, so rather late in the tale.  These gifts will later help the heroine.

3. The heroine leaves her initial home. Sometimes she has to leave because she is fleeing her father, as in Donkeyskin. Sometimes she is given away, like Rapunzel. Sometimes she chooses to leave, like Beauty, to save her father and family. If the heroine stays in her home, the home itself is somehow destroyed: Cinderella’s sense of home disappears when her stepmother arrives and she is made to work as a servant.

5. The heroine finds a temporary home. This can be Snow White’s home with the dwarves, or Psyche’s home with Eros in the old, mythic precursor to “Beauty and the Beast.” It can even be the Beast’s castle. In Donkeyskin, it’s the castle where the heroine serves as kitchenmaid, and in Rapunzel it’s the tower. The important thing is that it’s temporary: the heroine may think she can stay there, but she will eventually have to leave again. Sometimes, in the temporary home, she finds her true partner, but not in the right form or at the right time. Rapunzel meets her prince in the temporary home, but loses him again.

6. The heroine finds friends and helpers. These are dwarves, birds, snakes . . . The heroine finds them and enlists their aid by being kind to them, giving them what they need. And they will help her later on, when she is forced to leave the temporary home and set out on her journey once again.

7. The heroine is tested. Snow White is tempted with the ribbons, comb, and apple. Sleeping Beauty’s test is brief: can she resist touching the spindle? But some heroines go through long, agonizing periods of testing. The princess in “Six Swans” can’t speak for years, and must sew shirts for her swan-brothers. Tests can involve climbing glass mountains, wearing iron shoes, and dealing with ogres.  Even Cinderella must get home by midnight.

8. The heroine dies. The tests and trials that the heroine endures include a journey into death. This is perhaps clearest in Psyche’s descent into Hades, but Snow White in her glass coffin, Sleeping Beauty in her hundred years’ sleep, are all versions of the dead heroine.

9. The heroine finds her true partner. This time, he is in his right form: the bear has been transformed into a prince, the Beast is now a man. He recognizes her, just as she recognizes him. It may not seem like much of a love story (the prince dances with her three times, and that’s it), but that’s because fairy tales are told in a kind of shorthand. It’s a convention of the fairy tale that recognition of the true partner is immediate, if he is in his true form. If he is in his false or temporary form, the heroine must learn to see him correctly first.  And sometimes he must learn to see her correctly, because she may be in disguise as well.

10. The heroine finds her true home. She had to leave her initial home and find her true partner before she could enter her true home. Now Cinderella can live in the castle, Beauty can live with her Beast, and it’s time for happily ever after.

If you’re uncomfortable with the idea of the heroine finding her true partner (does she really need a man to be her partner?), you can think of it as a metaphor. The true partner is also the other side of herself, so the story shows us the integration of the feminine and masculine, human and animal, sides of the personality. I don’t know, really: I just know that the partner is usually there, that the heroine is eventually united to a prince. Perhaps it means that a union with the right other is one of the highest things we can achieve in this life, perhaps it’s about unity within the self. Either way, it seems to be part of the story.

I do think, looking over this list, that it’s an interesting model for looking at a woman’s life. I know that I’ve been into the dark forest, and through times of trial. I’ve found friends and helpers, as well as temporary homes. But I’ll have to think some more about whether and how this model is useful . . . 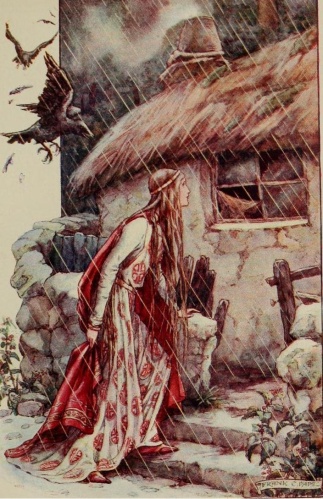 This image from the 1920s shows Snow White entering her temporary home (the dwarves’ cottage).

31 Responses to The Heroine’s Journey