I’m decorating my new apartment. It’s not that new anymore, actually — I moved in June, but then I immediately went to a literary convention, and then to teach up in Maine, and then I had a few weeks to unpack before I went to visit family in California. And then the semester started. So it’s really only been in the last month that I’ve been able to decorate. This apartment is larger than my last one, so decorating involves buying new furniture or refinishing old furniture. Which takes a while . . .

I never learned how to decorate as a child. I think some people do — they watch their parents put together rooms, and get a sense of what rooms should contain, what they should look like. What makes for a comfortable, beautiful space. But I didn’t learn that, I think for two reasons. First, I was growing up in the seventies, when ugliness seemed fresh and new. No, really — isn’t that what happened? After the sixties, beauty and comfort seemed old, done — and worse, reactionary. Art and architecture embraced the ugly, which at the time seemed powerful. It seemed to make a statement, although I’m not sure anyone actually knew what it was saying. Now, in retrospect, it just seems sad: those hideous sweaters and sweater-skirts, sweater-pants. (If you grew up in the seventies, you know what I mean.) On my university campus, the law school was once a famous example of Brutalist architecture. It’s now being entirely rebuilt, partly because it turned out to be impractical to actually use, but partly because no one wants to look at it. And the same sort of thing happened in decorating.

The second reason was that I grew up with a mother who prefers the modern and minimal: no curtains, a bed that is essentially a box. When I was in Middle School, I was put into a class called Home Economics that really should have been called Reinforcing Gender Stereotypes. (The other option was Shop, in which all the boys built things.) One assignment asked us to take a cardboard box and decorate it, as though it were a room in a doll’s house. I failed the assignment because my room was modern, minimalist. I lost points for the lack of curtains, for having almost no furniture. But our house had no curtains either . . . I fought against that minimalism in my own way. In my room, I put up bed curtains, bought Laura Ashley sheets. I wanted to be romantic (I was a teenager, after all), and so I wanted my room to be romantic. It’s hard to create a romantic modern, minimalist room . . .

I learned to decorate as an adult, the same way I’ve learned most things in my life: from books. I always cared about my living spaces, always thought of them as extensions of myself. And so I bought decorating books. I would flip through them in the bookstore, picking out the ones whose pictures made me go “Yes, that.” They had titles with words in them like “mission style” and “shabby chic” and “cottage.” And I started to create my spaces, buy the furniture that would go in them and that I would carry around with me, from space to space. The curtains, the pillows, the paintings.

I believe, more strongly than ever, that the spaces we live in are important: that they should be comfortable and beautiful. They should help us become, and function as, who we are. And I believe in saving money as much as possible, in doing as much as one can oneself. Which is why I sometimes have paint on my clothes . . . This week, I painted a bookshelf, a chair, and a mirror. You can see them all being painted here:

I chose the color some time ago: it’s called Flax, and it’s a cream, but not a warm cream. Almost a beigy cream. It echoes the beiges and creams that are the basic color scheme of the apartment. The shelf was already that color when I bought it, and just needed some fresh paint to cover scratches and wear. The mirror was a cheap hardware store mirror I had bought, originally stained brown and with that shiny cheap furniture finish. I wanted it to look old, like a mirror I could have bought in an antiques store, or that my grandmother had given me. So I painted it Flax. It makes me much happier now, and looks just right in its corner of my bedroom, in front of the shelf.

The entire space is a work in progress, but I’ll show you what my living room looks like. It took a long time to learn how to decorate, because it was a process of learning not just how to put together a room, but of learning myself — my own tastes, what would make me happy. What would fit how I lived and what I needed. If a room, a house, doesn’t fit the people who live in it, it’s decorated wrong. So this is my taste, which might not be yours . . . 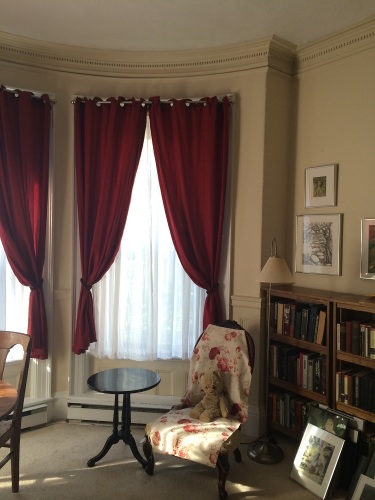 I love my red curtains, which I bought at a home good store.  They were the cheapest and simplest I could find, all cotton so they can be washed in a machine.  I’m not a fan of anything requiring special care.  You can see the paintings lined up by the shelves, waiting to be hanged.  But I’m not sure where to put some of them yet. And my favorite Victorian slipper chair, which I bought at an antiques store, is covered with a sample of the fabric in which I will eventually have it reupholstered.

My small table, which I refinished, with the chairs I reupholstered myself. You can just glimpse the chair I was repainting behind the table.  I found it, battered and needing care, in a thrift store.  It looks so lovely now . . .  And my birdcage, with birds on the outside.  (They always go on the outside.)  The bolt of fabric in the corner came just this week.  I’m going to sew it into pillows for the daybed (not pictured because it’s on the other side of the room, and also being repainted). 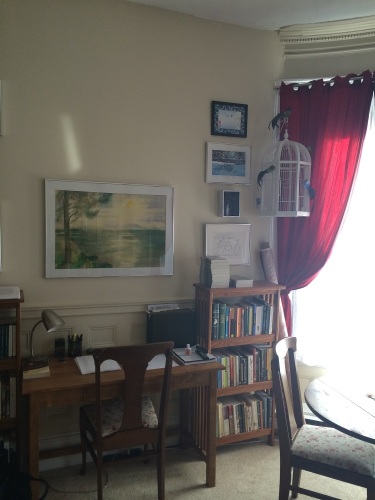 And one of my desks (I have two), both of which I refinished.  This is the one where I prepare to teach — the other is the one I write on.  The wall is still waiting for more pictures.  And did you notice?  I not only have curtains, I have two sets of curtains (three windows, six curtains in all).  I think I have, at least, mastered the curtains part of decorating . . .

2 Responses to Learning to Decorate