I woke up this morning in cold, gray, rainy Boston. That sounds negative, but it’s not meant to be. I love Boston, with its universities, libraries, art museums. I love its nineteenth-century architecture. I even love its weather. You experience all four seasons here: deep snow in winter; the always-delayed and longed-for spring, with its regular march of flowers; the warmth of summer, with its long days and bright sunlight; and finally the glorious autumn, when all the trees are ablaze. In the United States, it’s my favorite city, and I’m lucky to be living in it.

But it’s very different from Budapest.

A week ago, I was still waking up in Budapest, in a city that just as beautiful, similar in some ways but different in others. I thought I would try to write about some of those differences and similarities. At the moment I’m still feeling one of those differences, physically . . . when I travel from one city to another, I’m always sick for about a week. It could be partly the time difference, but I think the real culprit is the difference in humidity. Boston is on the sea, and is much wetter than Budapest: it’s like England, although our weather is more extreme. Budapest is much drier, and more consistently sunny. So when I first get there, I always feel dehydrated, and when I get back here, I always have to adjust to the moisture in the air.

As for the similarities, both cities are actually two cities: Buda and Pest, Boston and Cambridge. And the two cities have different characters. Pest is more urban: there are more shops, and it is where business happens. Buda is more residential, particularly since it’s made up of wooded hills. Pest is flat. Both are beautiful in their own way, but I think Pest is more exciting. In Boston, that’s the Boston side: urban, filled with theaters and museums. The Cambridge side is more residential, although it’s also where several of the great universities are located: Harvard, MIT, Tufts. Boston and Cambridge are less integrated than Buda and Pest, but both cities have two sides linked by bridges across a river.

Here, by the way, is the Danube, with Buda on the left side and Pest on the right:

The Danube is one of my favorite rivers. On a sunny day, it’s the color of green jade. It’s one of the great rivers of the world, and ships still run up and down it, mostly filled with tourists. The Charles River, between Boston and Cambridge, is a very different river. It’s about as wide as the Danube, but it runs between wooded banks, since there are parks on both sides. And it’s gray. Whether on a sunny day or a stormy one, it’s gray the way Boston itself is gray, somber and solid and respectable.

Boston is one of American’s oldest cities, but the Boston I live in was mostly built in the nineteenth century. It has an English sensibility about it, that makes me feel right at home in London. Budapest, by contrast, was built mostly in the eighteenth century, and it has buildings that look like this:

Actually, most of the buildings look like that, although these three are particularly spectacular examples. I can’t include many pictures here, but I wanted to give some sense of what the city itself looks like. It’s not gray and brown, which are the predominant colors in Boston: the buildings are covered with plaster, and the plaster is painted all different colors, in a particular palate that seems to suit the sunlight of Budapest. So you will find buildings in lemon yellow, and terracotta, and a sort of soft pink. A green like pistachio ice cream. And you will find ornamentation everywhere: ordinary buildings have angels on them, or fauns, or other ornamental figures. Just . . . because, I guess. It makes the city seem almost feminine. It also makes the city seem like something out of a fairy tale.

Boston is much more businesslike, and here we come to an important difference: Boston is much, much richer. Budapest is beautiful and magical: it also feels fragile. It’s a city that’s gone through two World Wars and a Cold War. It’s a city that’s been damaged. That damage has been repaired and is being repaired: now that the economy is picking up again a bit, you can see construction all over Budapest. There is a continual effort to clean up the soot left by the Soviet era, to save the glorious buildings that made Budapest one of the jewels of the Fin-de-Siècle. But you can feel that Budapest is not a rich city, that it’s like a beautiful woman who is chic on slender means. Boston, by contrast, is like a wealthy matron who doesn’t feel the need to be chic. Oh, Boston is beautiful in its own way. But part of that way involves wealth and power over centuries. Not having to go through the trauma of wars, at least not in recent memory . . .

One of the lovely things about Budapest, which I miss very much, is being able to buy fruit everywhere, on every street corner (and cheaply). This was my favorite store for fruit, a simple convenience store that had the freshest and best cherries, raspberries, blackberries:

I suppose I should mention this too: Budapest is delicious. I mean, really really delicious. Everywhere you go, you can get coffee, and cakes, and ice cream. You can get delicious soups. One thing I particularly noticed is that the tomatoes taste like tomatoes: I mean, even the tomatoes in the stories, wrapped in plastic, taste as though they were ripened on the vine. That’s something Boston can’t compete with, I suppose because Hungary is an agricultural country, and Massachusetts is not a particularly agricultural state. We’re too far north, our growing season is too short. But I think it has to do with culinary tradition as well. Hungary has one of the world’s great cuisines. England . . . does not, and that is the cuisine Boston has largely inherited. (A strange little side note: I can spend a month in Hungary without gaining weight, but in England I almost immediately put on five pounds, which I have to lose after leaving the country. Why is that? Perhaps because Hungarian food is so flavorful that I automatically eat less, I don’t know.)

During my last week in Budapest, I bought myself some dried lavender at a flower stall. There are lavender sellers all over the city, and this bunch was 200 forints, which is about a dollar. 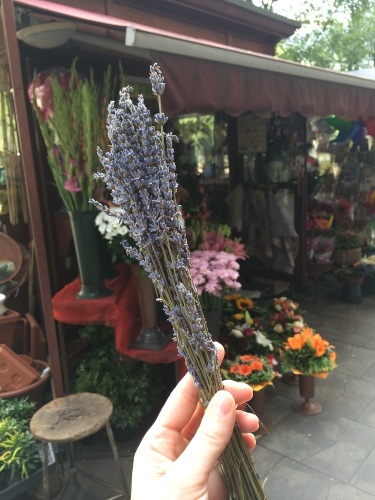 I put the lavender in a little vase in the kitchen, and all week the entire kitchen smelled wonderful. I wish I’d bought lavender earlier! Which reminds me of another difference between Boston and Budapest . . . both cities have people who are homeless, but the ones in Budapest are truly beggars in the old-fashioned sense. They are often old and disabled: they seem much poorer than even the poorest person in Boston. Budapest is very much like any modern city in that way: it has great contrasts of poverty and wealth. Perhaps the wealth isn’t quite as wealthy as Boston’s, but the contrast is still there. It reminds me how very, very privileged I am to live this life, in which I can teach, and write stories and poems, and travel to a place like Budapest.

The final picture is of me in front of the Gellert Hotel, and I took it because I was on my way to school, where I was learning Hungarian, and had my hair up in a way that looked intricate, although it really wasn’t.

I feel different in Budapest: lighter, more summery, more chic. I always wear swingy skirts. Perhaps it’s because my real life is here, in Boston: this is where I work. But I think the two cities also have different atmospheres. They allow me to be different people, to experience the world in different ways. And that’s why I love to travel: because I can be different versions of myself. Which I think is true for many of us . . .

2 Responses to Boston and Budapest