I know, I haven’t been blogging regularly. I try to write a blog post each week, to post on Saturday or Sunday. And that hasn’t been happening.

It’s because I’ve been living too hard, and writing hard too. And that doesn’t leave much room for blogging. In May, I finished the university semester, which means that I turned in my grades and wrote to my students one final time. Then I started packing. Today I am writing this post in a cafe in Budapest. I’ve been here for a week and a half, and will be here for another three weeks. Usually when I’m in Budapest, I’m a visitor: I go around to see the sights. But this time, I’m a student, taking an intensive course in Hungarian, trying to relearn my native language, the language I spoke until I was about five years old, when my family left Hungary. So on weekday mornings, I go to school for three hours. And then in the afternoons, I study.

Also, I work on the novel. In case you were wondering, it’s going very well. I have over 100,000 words written, and they’re close to the right words, which is the important thing. This weekend, I should be able to finish this particular draft, which will mean that I have an entire draft of the novel written. Then, I will revise. And then it will go to readers for feedback.

Studying Hungarian and writing a novel don’t leave much room in my brain for anything else!

But I wanted to write about what it’s actually like to live here, rather than just visit. It feels as though I’m doing all the things I would be doing at home in Boston: shopping for groceries, going to school (although here I’m a student rather than a teacher), trying to make sure I have the basic things I need (like plates, towels, wifi). So I’m going to include some pictures and try to describe what my life looks like, here in Budapest.

Below is my pretty little street. The cafe on the street is called the California Coffee Company. One difference between my schedule here and in Boston is that here, I wake up at 5 a.m.! Because across the street is the park around the Nemzeti Múzeum, and in the park there are tall trees, and in those trees live birds. They wake up at 5 a.m., and they wake me up too. It’s like a bird alarm, and there is no snooze button! So I wake up, and eat breakfast, and study Hungarian. When the California Coffee Company opens at 7:30 a.m., I go get my tejeskávé, which is a latte, and do whatever needs doing with wifi. By the time I’m done, it’s time to leave for school. 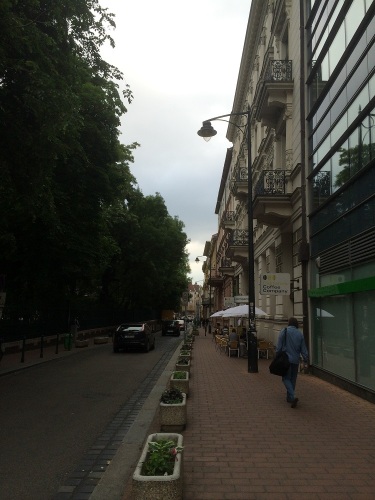 And this is the museum itself. The statue is of a famous poet, János Arany, because in Hungary poets are very highly thought of, and they get statues made of them, and squares named after them. It would be nice if we did this sort of thing, wouldn’t it? My school is across the Danube, so I walk across the Szabadság Bridge to Buda. (Budapest is two cities, Buda and Pest, separated by the Danube. Rather like Boston actually, with Boston on one side and Cambridge on the other. It’s funny that, in the United States, I ended up living in the city most like Budapest.) And then it’s Hungarian for an hour and a half, with a break, and then another hour and a half. My class is ten students, from all over the world: there is a doctor, a folk singer, a businesswoman. They come from countries such as Italy, Switzerland, Japan. And of course the United States. The class itself moves quickly: during the first week, we covered over a hundred vocabulary words, the objective case, and how to pluralize both nouns and adjectives. We were expected to know numbers up to a million. How to count money, make phone calls, buy produce in the shops. How to have a basic conversation.

Hungarian is what a language would look like if it were created by a mathematician who is also a poet.

It’s a particularly difficult language to learn because it’s not Indo-European. It came down from the steppes with the Magyar tribes, who were nomadic horsemen. In Hungarian, you say that a person lives in another country: Amerikaiban. (“Ban” means “in.”) But you say that a person lives on, not in, Hungary (Magyarországon). Because the early Hungarians did not think of themselves as living in a country. Other people lived in countries: the Magyars lived on their hills and plains. It’s part of the Finno-Ugric groups of languages that includes, basically, Finnish and Hungarian. In Hungarian, most of the grammatical work is done by suffixes, so you need to know which suffixes to use for different tenses and cases. Word order is important for emphasis. And then, there’s the poetic part: the suffixes change vowels so that the vowel sounds harmonize. In other words, the plural of tomato (paradicsom) is paradicsomok. But the plural of gyerek (child) is gyerekek. Because o is a back vowel, and e is a front vowel. So ok and ek just . . .sound better. In order to make a word plural, you not only need to know the ending, you also need to know which vowel to use. And there are fourteen vowels. (In French, you can talk about the vowel e, taking several different kinds of accents. In Hungarian, e and accented e actually function as different letters.)

One things that saves me, in particular, is that Hungarian is almost entirely phonetic: if you know how a word looks, you can pronounce it. Pronunciation often trips up Americans, but mine is actually pretty good. So I can say things like “viszontlátásra” (“goodbye,” technically “see you later”) without tripping up.

This, by the way, is a Puli, a traditional Hungarian herding dog. I see him sometimes as I head home, back across the Danube. His dreadlocked hair keeps off the rain, and is said to protect against wolf bites. I think that if a wolf took one look at a Puli, it would be so confused that it would slink away, trying to figure out what in the world that was and what one does to it . . .

And this is what my lunch might look like. Kifli (the bread, which has a specific name), with a paprika and ewe cheese spread, pickles, smoked cheese, and cherries.  Food in Hungary tastes completely different from food in American, or England, or even Austria. It has its own distinctive flavor: less sweet, more complex.  When I’m not here, I miss it.

And then it’s time to do my own work (mostly writing just now, although I also have to start preparing for my summer residency with creative writing students). And of course to study Hungarian. Honestly? It’s difficult sometimes. I’m a terrible introvert, and I have to force myself to have conversations in Hungarian. It would be so easy to pretend I don’t know any, just speak English. Most people here know enough English that I could get by. It’s embarrassing to make mistakes, and I’m sure I make many more than I’m aware of. But I make myself say “egy tejeskávét kerek” even though I’m not sure it’s right. I tell salespeople that I’m learning Hungarian, even though I don’t speak well (“magyarul tanulok, de nem jól beszélek). As I walk down the street, I sound out the signs. Whenever I see a number, I make myself say it. Because the best way to learn anything is to live with it. Or on it . . .

Here, finally, is a picture of me with my river, the Danube. In the distance is Castle Hill. It’s lovely to be here, and although I know my stay here is temporary, I’m glad that it feels as though I’m living here, not just visiting. It’s good to be “Budapesten.” Which, yes, means on Budapest . . .

6 Responses to Living in Budapest