When I was growing up, when I was a teenager and then in my twenties, I had an image in my mind, of a woman. She was a woman I could never become, because she was so much more sophisticated than I was. She was the sort of woman who walked around European cities, with a scarf wrapped around her neck. She negotiated her way in English and probably French and who knew what other languages. She was beautiful and accomplished: she had done things and she knew it, and out of that came her confidence, her ability to walk through strange cities with a mysterious smile on her face. Looking as though she belonged, wherever she was in the world.

Yeah, you hate her too, right?

Hate is the wrong word. I never hated her: what I did was envy her. I would have wanted to become her, except that it seemed so impossible. She was so different than I was. Because I was . . . well, awkward, and unsure of my place in the world, and often scared. I felt as though I had no idea what I was doing, as though I was an alien or an imposter pretending all the time. You probably know what I’m talking about, because we’ve all been there. But I kept on doing what I was doing, kept on working and writing. Because this is life, and what else are we supposed to do? I finished things, as one does: poems, stories, degrees. So I published, and put my diplomas on the walls, and even won some awards. Oh, and I bought some smashing clothes, mostly in thrift stores because that was where I could afford to shop. And I taught classes.

One day, a student of mine asked to interview me for a sociology project. She was supposed to interview someone who was doing creative work of some sort. And one of her questions was, “Where did you get your style?” I stared at her and asked, “My what?” I think it was that day I started realizing something that has startled me ever since, that startles me all the time: somehow, I’m not entirely sure how, I had become That Woman.

This is a picture of me from last summer, in Brussels. Very consciously being That Woman! Because there I was, realizing that I was in Brussels, speaking (broken) French, buying sandwiches on baguettes, walking around the city and going to museums. And thinking, Yeah! I’m her . . . 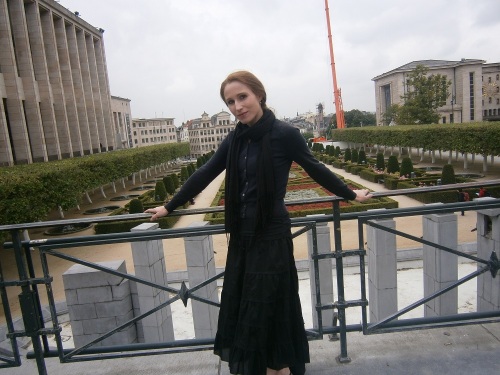 (I bought the scarf at a small store in London, the skirt at a thrift shop in Budapest.)

I think those of us who are women all have a “That Woman,” the woman we don’t think we can become. And I guess what I want to say is, says who? You, that’s who. You say you can’t become her. And so you envy her, whenever you see her walking around a city or along a beach, or climbing a mountain, or whatever your That Woman does, because all of ours are different. (I don’t know if men have a That Man? It would be interesting to find out.) But, of course, you can.

I don’t think you become her by setting out to. You don’t say to yourself, I’m going to become That Woman, and go out to buy the right clothes. For one thing, you’ll get it wrong, because you probably don’t understand her yet. Your That Woman is a projection of what is deeply, truly inside you, the woman you could become (which is why you envy her, for being what you so want to be). So the way to get to her is to find what is deeply, truly in you, and keep doing it. While you feel awkward and inadequate, while you’re afraid. If it’s writing, go sit at your desk or in a coffee shop and write. If you want to go back to school, do that. Buy the clothes you really love (I still recommend thrift stores, which is where I get most of mine). Do the things you genuinely love to do. When you do that, over and over, you slowly start to become her.  And it is in the process of becoming her that you understand who she is.

The hardest thing about this process is overcoming your own negative emotions: your fears and feelings of inadequacy. The thing to remember about emotions is that they’re only emotions. You can feel them without acting on them. So be afraid, but do what you want to anyway. Separate out your feelings and actions. Feel your feelings, but pay attention to your actions.

(This is me reflected in a mirror in front of the Magritte Museum, which is my favorite museum in Brussels. I was so glad to have gone to Brussels, simply to see this museum.)

I have two stickies over my desk about fear. They are on my cork board, where I can see them every day.

What would you do if you weren’t afraid?
Everything you want is on the other side of fear.

They work together, don’t they? Perhaps because I’m a writer, I think it’s useful to write things like this out. When I do, I find it’s easier for me to remember them, to live them. They become my inner voice, the voice that speaks when I need it to, that guides me. That inner voice speaks to all of us, and it often seems as though it speaks from outside, as though it’s the voice of another. But of course it’s not: the inner voice is your own voice, although it often repeats what others have told you. That you can’t, that you’re not good enough. But you can take control of that inner voice, you can change what it says. You do that not directly, because you can’t argue with the subconscious, but slantwise. Like by putting stickies over your desk.

Now that I am That Woman, there are some things I know about her. I’ll let you in on those secrets:

1. Before she became That Woman, she was not That Woman. She thought she could never become That Woman, until she did. She spent a long time being scared, feeling awkward and inadequate. And then one day, she found herself walking through Brussels in a swingy skirt and leopard print flats, with a scarf tossed carelessly around her neck. On that day, or another, she realized that she had become That Woman.

2. Some days, when she wakes up in the morning, she groans and crawls back under the blankets. You might think, Aha, she’s not That Woman all the time! But you’re wrong: groaning and crawling back under the blankets are part of being That Woman. It’s all part of the package. Later that day, she will walk to a cafe and work on a poem, or go to a museum, or just dreamily watch the snow come down outside her window. She will be That Woman, whatever she’s doing.

3. What defines her as That Woman is that she knows she is. She knows she’s the woman she wanted to be, or is well on her way to getting there. She looks at herself in the mirror and says “Yes.” She looks at her life and says, “This is what I wanted to do, and I’m doing it.” Her fundamental attitude toward herself and her own life will be love. Oh, some days she will be tired, and frustrated, and overworked! But underneath, there will be gratitude and joy.

Last picture: me on a park bench in Brussels, that same day.  See?  I wasn’t kidding about the leopard print flats . . .

181 Responses to Becoming That Woman