I had a birthday recently. And I thought about the things I’ve learned so far in life. There are a great many of them — after all, I have two graduate degrees, so I must have learned something. But I mean those fundamental lessons that you hold on to, that you use every day or week. And since it seems to be the fashion to make lists, I thought I would make a list of some things I’ve learned so far. This is, obviously, in no particular order — except the order in which I wrote them down.

1. You can tell the people who are strong, because they are also kind.

I’ve found this to be generally true, that people who are strong, who are confident and sure of themselves, certain about who they are and where they’re going, are also kind. They have no need to hurt others. The people who have hurt me have inevitably done so out of weakness, because they were uncertain about where they were going, unsure about who they were in the first place. Knowing that makes it easier to forgive people who hurt you. It’s also useful to know that when you are unkind, it’s usually because of some weakness in yourself.

2. It’s possible to live an extraordinary life, but it takes an enormous amount of work.

I know people who live extraordinary lives, who are creating great works of art, traveling all over the world. And they work very, very hard. Their example shows me that I, too, can have an extraordinary life. And to get working . . .

3. Almost all of your clothes can be washed in a machine or by hand. Except ballgowns: always get ballgowns professionally cleaned.

I suppose I should add business suits to that list, but I don’t have any business suits. That was one reason I left the law: I never wanted to wear a business suit again. And almost all of your clothes can be washed in hotel sinks, which is useful to know when you’re traveling all over the world, living that extraordinary life. (But jeans and socks take a very long time to dry.)

4. There will come a day when you realize that you’ve gotten everything you wanted, and then you will need to decide whether you wanted it after all, or were simply fulfilling the dreams that others or society had for you.

The earlier this day comes, the better, because it often involves a course correction. You may well decide that after all, the house in the suburbs and what was supposed to be a secure career make you feel like jumping in a lake. That you feel as though your soul is turning brown like one of your houseplants. It is better to change your life than jumping into a lake — harder, but better.

5. You must take care of your skin.

Cleanse, exfoliate, moisturize, apply sunscreen. As though you belonged to some obscure church of the skin, in which this ritual was considered necessary for the salvation of your immortal soul.

6. Clothing sizes bear absolutely no relation to the size of clothing.

The numbers on clothing bear no relation to anything on the material plane. They are a secret code used to communicate with spiritual beings in other dimensions, and are beyond our primitive understanding. Ignore them.

7. Everything you want to accomplish takes longer than you want it to take.

I’ve found that everything I’ve ever wanted, whether it’s going to graduate school, finishing my PhD, moving into the city, has taken me a year longer than I wanted it to take. When I desperately want to do something, and it isn’t getting done, I think — oh yes, the one year rule.

8. Learn how to be alone, or you will end up staying in relationships long past the time when you should have left.

I’ve seen so many people stay in relationships because they were afraid to be alone. Or get into relationships for that reason. It is much worse to be in a relationship that makes you feel alone than to actually be alone.

9. Your habits create who you are.

I hate to admit this, but it’s so true: what you do every day creates the person who are. At some point, I started exercising every day, and I started looking different. Like a person who exercises every day . . . When I write every day, I feel like a writer, I publish like a writer. When I don’t write every day, I feel lost. The small habits, the sleeping and eating and exercising and working, even what you wear every day, create who you are as a person. We like to think that we are who we are, and our habits come out of that — but we create who we are incrementally, out of all our habits. Day by day by day. (Which means we can also change ourselves, incrementally.)

10. You can buy happiness, but it’s called something else.

You can’t actually buy happiness, but you can in fact buy something that makes you happy. The trick is, that thing has to make you more the person you want to be. That’s what makes you happy, not the thing itself. Some time ago, I bought an adorable pair of pixie boots at Goodwill. They were $10 (the price is still on the bottom of the boot, in silver marker). They would not have made me happy if they had been too expensive, because that would have gone against my idea of myself — as someone who does not spend a great deal of money on clothes, but is nevertheless more chic than many people who do. Every time I wear those boots, I feel as though I’m dancing along the streets, as though I’m some sort of urban princess. They make me happy, because they allow me to be the person I want to be. Another thing that makes me happy? Buying plane tickets. So you can in fact buy happiness, but it’s called “pixie boots” or “plane tickets” or “dark chocolate.” If you’re unhappy, buying a little bit of happiness is not such as bad idea.

Here, by the way, are those boots, with a gray lace skirt and black jacket I wore to the theater this week. “Theater tickets”: that’s another way to buy happiness. 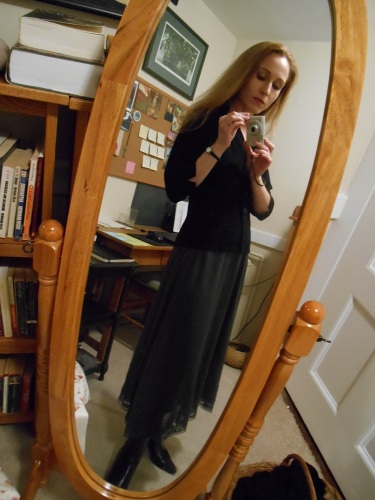 I’m sure there are things I could add to that list? I have, after all, learned more than ten things so far . . . But I’ll have to think about what they are. I thought I would end this blog post with a picture of me by the river, being pensive. And perhaps a little wiser than last year. 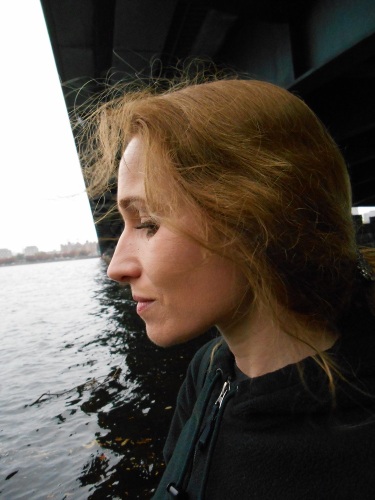 8 Responses to What I’ve Learned