This semester, I’ll be teaching a class on fairy tales. I thought you might like to know what I’m asking my students to read, because if you read this blog, you’re probably interested in fairy tales. Right?

The central text of the course is Maria Tatar’s The Classic Fairy Tales, from Norton. It contains most of the tales we’ll be reading, as well as important criticism. As we study each tale, the students will read Tatar’s introduction to that tale to provide historical and critical context. We will also be reading Bruno Bettelheim’s The Uses of Enchantment, not because I necessarily agree with his psychoanalytic interpretations (I usually don’t) but because they give students a useful theoretical stance to argue for or against. The semester is arranged by fairy tales, so I’ll give you the stories and poems we’ll be reading by tale, mostly in the order we’ll be reading them.

We’ll start the semester with J.R.R. Tolkien’s “On Fairy Stories,” so we can consider the question “What is a fairy tale?” And then we’ll get into the tales themselves.

Throughout the semester, we will be reading critical articles, which I’ll list as well:

Of course, the students will need to go out and find articles themselves, for their papers. I always find that the most useful for them to start with are those by Terri Windling, and anything linked to on the Sur La Lune website.

So there you go. That’s what we’ll be reading during the semester. I hope you go out and find some of the stories yourself — or even the essays and articles, if you’re interested in fairy tales! (And I think you are . . .) 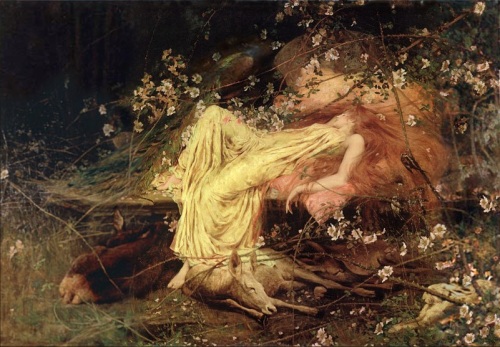 A Fairy Tale by Arthur Wardle