This past week, I was in Brunswick, Maine, teaching at the Stonecoast MFA Program summer residency. Then I went to Portland, and then to Peaks Island in Casco Bay, so I could visit one of my favorite people, fantasy writer Catherynne Valente. While I was there, one of the Stonecoast students posted what I thought was an interesting and important Facebook update: she said that after the intensity of the residency, it was difficult returning to ordinary life. And I completely understand that.

How do we do that, after having an adventure? How do we return to ordinary life?

I have an answer, but I’m afraid it’s one that may disappoint you. My answer is: don’t. Create a life that isn’t ordinary.

On Peaks Island, I had a wonderful adventure, although it was a very simple one. I rented a bicycle and rode all the way around the island. Here is a picture of me on the purple bicycle I rented:

(Thank you for taking this picture, Dmitri Zagidulin!)

The island is four miles around, so it was not very difficult to bike all around it. But I saw the most beautiful things. A small island connected to the larger one by a causeway, where I later clambered among rocks covered with bright yellow seaweed, and smelled the last of the rosa rugosa, and collected shells. A stony beach where people had piled stones on top of each other to form sculptures. Miles of road by the sea, where I rode to the crashing of waves and said hello to everyone I passed. Houses painted pink and blue and yellow, surrounded by gardens filled with the sorts of flowers that grow in a moist, cold climate.

Here is the island connected by the causeway:

And here is me clambering on the rocks, wearing my beaten-up Keds with a hole in the toe:

And here are the rocks with the bright yellow seaweed: 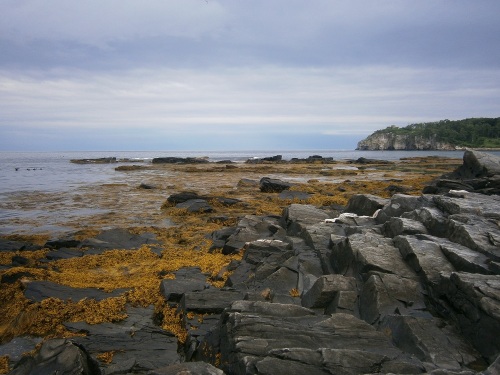 And here are the shells:

After my ride, I bought myself ice cream in the shop by the ferry landing. I didn’t want to return my bike, although of course I had to, eventually. But for three hours, I had felt so free, so happy. Now, I know that not everyone can go to an island in Maine. And tonight, I’m going home to Boston on the train (which is where I’m writing this blog post, moving through the night, somewhere between Portland and Boston). I suppose you could say that I’m finally returning to ordinary life, but am I? In Boston, I will have a month to finish a novel before the semester starts. So I’ll be finishing the draft of my first novel, which surely isn’t an ordinary thing to do. And I’ll be hunting for summer skirts at my favorite thrift stores, and walking around the city, and visiting the river, and going to the art museum. I’ve been so many places this summer, but I’m not returning to the ordinary, because my life isn’t ordinary — I have imagination, and so anything can be an adventure. I’m the one who brings the adventure to it.

I want my life to be a great adventure, but I know that I’m responsible for turning it into one, for being adventurous — because that’s how it works. It’s my responsibility to be the adventure . . .

3 Responses to Being the Adventure