I’ve been terrible about updating this blog, haven’t I? I’ve just been so unbelievably busy, last month and this month. But I have to post something. I feel as though I can’t let a month go by with no posts at all.

I was able to step out of the busyess for at least a little while last weekend, at ICFA (the International Conference on the Fantastic in the Arts). It’s my favorite of all the conferences, either academic or industry. I like it so much because it’s small, and I know all the writers and many of the scholars there, and so it’s like meeting a group of your best friends again, many of whom you haven’t seen for an entire year. There are things to do: I gave two readings, one of “England under the White Witch” and one of my story “Estella Saves the Village,” which is in Queen Victoria’s Book of Spells. But most of my time was spent catching up with people, hearing what they had been up to, what they were planning on doing. And such people! The very best writers in the business. Writers like Kij Johnson and Andy Duncan and Jeffery Ford. And I got to meet Neil Gaiman, which was of course a pleasure.

I’m going to include two photographs here. The first one was taken at the banquet, which occurs on the last night, by Ellen Datlow. 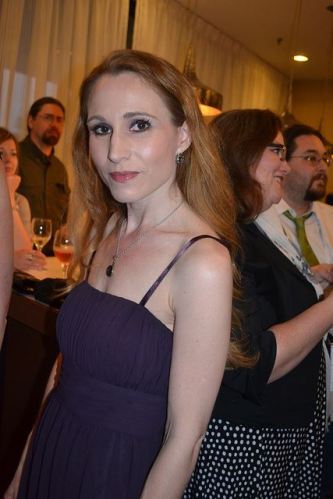 I’m rather proud of this dress because I found it at Goodwill for $10. I bought it specifically for the banquet, but by the time ICFA came around, I had lost some weight and it no longer fit as well. Which isn’t usually a problem, but this was a strapless dress. There were loops for straps, so it had once come with them, but no straps with the dress. So I hunted all around town until I found some ribbon of the right color and matching thread (at two different stores). And I made straps!

The second photograph was taken by Jim Kelly, and it’s of me with fabulous writer friends Maria Dahvana Headley and Kat Howard. I thought we looked pretty smashing! 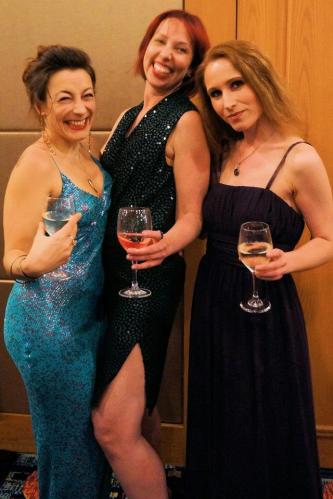 What I value most about ICFA is the sense of camaraderie, that we’re all in this together. That those of us writing and studying the fantastic are part of a community — we care about and take care of each other. Now that I’m back in Boston, I miss my community, but I know that I’ll see them all again, while I’m in Europe this summer, when I teach at Alpha and Stonecoast, and of course at Readercon, where one of the guests of honor will be Patricia McKillip, who influenced me so much when I was a teenager. And of course I’m in constant contact with them, and with the larger community all over the world, online.

Writing is such a solitary activity! I think it’s important that we come together, we writers. We need to hear what others are doing, tell them what we are doing — check in with each other and with other parts of the industry. Which I suppose is why we have this yearly round of conferences and conventions. It’s expensive, and there are many conventions I wish I could go to but can’t afford. Still, whenever I do manage to go, it’s so worth it.

Also, it gives my evening dresses something to do . . .

4 Responses to Being at ICFA