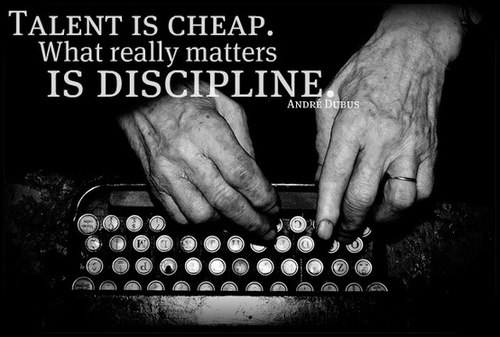 I’ve been thinking about it, even looking up the man who is credited with saying that talent is cheap: Andre Dubus. (His name doesn’t seem to be spelled with an accent anywhere but in the graphic, although that’s the French spelling. Having read that he’s a former marine who received an MFA from the Iowa Writers’ Workshop and passed up lucrative novel deals because he wanted to devote himself to the short story, and that he was a friend of Vonnegut and Updike, I rather doubt that he used an accent. He doesn’t seem the type.)

And I’ve been wondering if it’s right. I’m not so sure it is. I’m not so sure talent really is cheap. If it were, we could all be anything we wanted to. I could, with enough discipline, become a talented gymnast or musician, for example. But that’s not the way it works. If you’ve raised a child, you know that children are good at some things and not good at others. Intellectually, my daughter is ahead of her peers, particularly in terms of her verbal ability. She’s also physically uncoordinated, the way I was at her age. Neither of us is particularly good at sports. No, let me be more specific: there are certain sports I could be good at. I’m good at sports that require grace: downhill skiing, anything involving dance. I’m not good at sports that require spatial skills, anything involving a ball. Even gymnastics. I could get better at them, I’m sure. But do I have talent? No, I don’t.

Talent is what, initially, allows us to do things untaught or self-taught. Later, it allows us to make the most of the training we receive, to move more quickly and benefit more from a training regimen. I’ve seen people with talent. I’ve seen them sit down at a piano and play something after having heard it once. Or sit down at a table and draw something, knowing before they set pen to paper where each line is going to go. Talent is something we envy, because it makes the difficult seem easy. And talent is something that has gotten a bad rap lately, I think because it seems undemocratic. The idea that talent is cheap, and that discipline is what’s important, seems more American somehow. We want to believe that we could all become great at whatever we chose, if we dedicated ourselves sufficiently. But I don’t think that’s true.

I do think that we all have different talents. Perhaps that is my own egalitarianism: I think we all have something we are called to do. Some people answer the call, some don’t. I’ve seen people with significant musical talent go into the business world, where that talent went undeveloped and was used only to entertain during family gatherings. Is there anything wrong with that? Well, to be honest, I actually think there is. But whether or not we develop our talents is our individual choice. That is where discipline comes in. It takes a great deal of discipline to become truly good at anything. But I think in the end, to be truly good (much less to be great), you need the interplay of talent and discipline.

I wish I had a good definition of talent. I’m trying to think of what it is exactly, because I do think I have one (remember, so does everyone else: a talent or talents). Perhaps it’s a capacity to get inside something, to see it from the inside rather than the outside. For a musician, it’s an instinctive sense of how music works. For a writer, it’s an instinctive sense of how words fit together, how they make sense and the different kinds of sense they can make. It’s the way my eight-year-old daughter, told that a painting is Op Art, immediately asks if the word comes from “optics.” It’s the way I can feel dance moves in my body, as I can’t feel the moves in basketball — but I know there are people who can.

Don’t get me wrong: discipline is at least half the battle. But talent is not cheap. If only it were!

11 Responses to Talent and Discipline