Did you know that I’m writing a novel? Well, I am. I’m about 30,000 words into it, which is longer than anything else I’ve ever written. Even The Thorn and the Blossom, which was a book, was only a novella: it ended up being about 20,000 words long. So it’s as though I’ve swum further out than I’ve ever swum before, and there are some things I’m learning about writing a novel that I couldn’t have learned in any other way.

The first thing I’ve learned is that it’s hard! Much harder than writing novellas. As you probably know, if you’ve spend any time on this website, I write different sorts of things: novellas and short stories and articles and poetry. Each sort of thing I write has its own rhythm, its own way it wants to be written. Strangely enough, writing a novel resembles writing my doctoral dissertation more than anything else. Constructing a plot is like putting together a very long argument: things have to happen in the proper places. If they don’t, you need to reorganize. You can’t get by, as you can in a short story, on the poetry of the language.

One of my greatest difficulties, and I don’t know if other writers have a problem with this, is simply moving my characters through space. How does Mary get out of a carriage? How does she walk across a room? I have to see, precisely in my mind’s eye, how she’s moving. And I’m dealing with more characters than in a typical short story, so I have to keep them all in mind. I can’t forget that one is in a scene, I can’t let the scene go on too long without that character doing something. I have to say, wait, this important message is being communicated, but in the meantime, Diana would be bored. Where has she wandered off to?

Part of the difficulty is that my characters are moving around London in the 1890s, and so I have to understand how they’re traveling. I’m so glad I went to London last summer! I honestly don’t think I would be able to write this novel if I had not seen the buildings, the parks, for myself. And this is where sometimes I have to pause while writing, so I can click over to Google Maps or Wikipedia. Or both. Monday, for example, I had to figure out how to get my characters from Baker Street to Purfleet, which is (or at least was) on the outskirts of London. It took a ride in a hackney cab and then a train. Here is how Wikipedia helped: 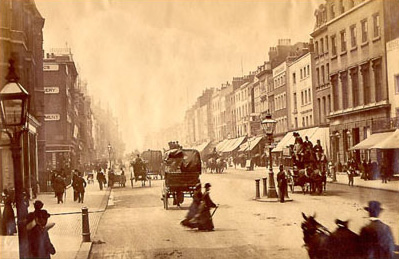 This is Oxford Street in 1875, and it’s the street my characters would have driven down about twenty years later. But at least it gave me a sense of what they would be driving through. It allowed me to imagine the rest. That’s why writing a novel is more like writing my doctoral dissertation: it’s a matter of fitting puzzle pieces together, and it involves a lot of research.

Of course, it’s a lot more fun than the doctoral dissertation, and that’s another difficulty: that I want to work on it all the time. Of course I can’t: I have a job to do. But when I do work on it, which is at least every other day, it’s hard to come back out. For a little while, I’m living so intensely inside my head, and when I come out, sometimes I forget what day it is, what I was supposed to do. I just want to be back in London with my girl monsters . . .

4 Responses to Writing a Novel