Last weekend, I went to the cemetery in Concord where prominent families used to be buried, back in the 1700s and 1800s. There’s a narrow path there called Writer’s Row. It goes up a hill, and as you walk along it, this is what you pass:

The grave of Henry David Thoreau. 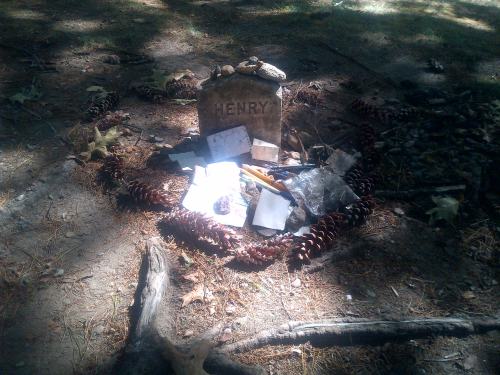 Can you see the things people have left? Including letters about how much his writing has meant to them. (Of course I didn’t read his private correspondence. But some of the letters had been left open, and you could see what people had written him.)

The grave of Louisa May Alcott. 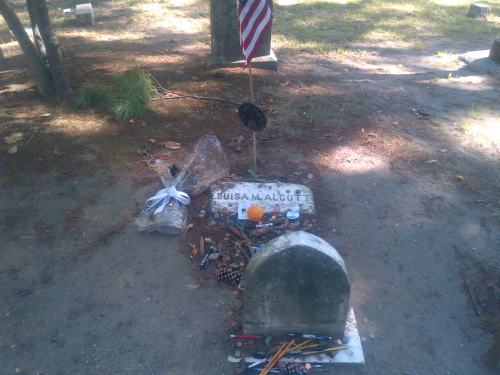 Among the things left for her were an orange, a kazoo, and a lifesaver. (Yes, the small candy. I wonder if it was meant to be a metaphor? It was still in its plastic wrapper, as though someone had wanted it to be preserved.)

The grave of Ralph Waldo Emerson. 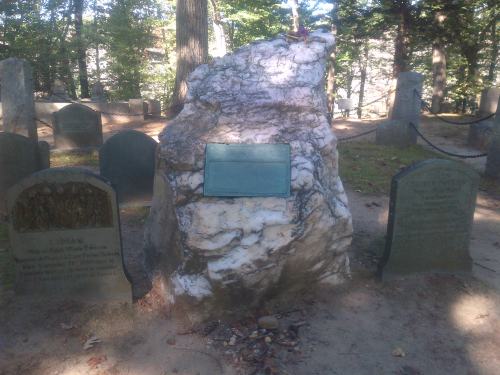 This one was the grandest, but not my favorite. I liked the smaller gravestones better, and there were more things left at them. I think it’s easy to respect Emerson, but easier perhaps to love Thoreau, Alcott, and Hawthorne.

The grave of Nathaniel Hawthorne. 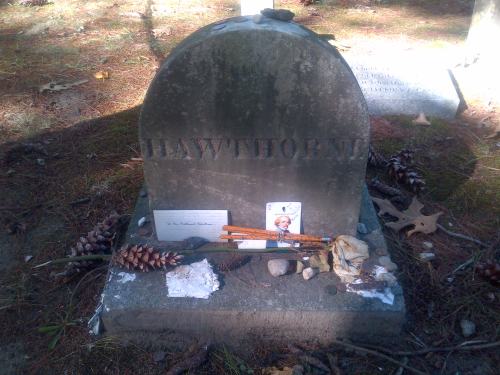 I mention this one last although it was not the last in sequence, because this was the one I went back to. I sat by the grave, tore a sheet of paper out of my Moleskine notebook, and wrote him a letter. (I always travel with pen and paper, of course. Doesn’t every writer?) I tried to make it relatively formal, so he wouldn’t be shocked by my modern tone. I called him “Dear Mr. Hawthorne.” I thanked him for creating Beatrice Rappaccini, told him that I had written a story about her and that she was a character in my novel, and said that I hoped he wouldn’t mind. I hope he doesn’t . . .

We’re always in conversation with other writers, aren’t we? And some of them, perhaps most of them, are dead. It’s nice, sometimes, to write them a letter. (In case you were wondering, my letter is the one on the left.)

6 Responses to Visiting the Dead