Today I thought I would upload two pictures. Here they are: 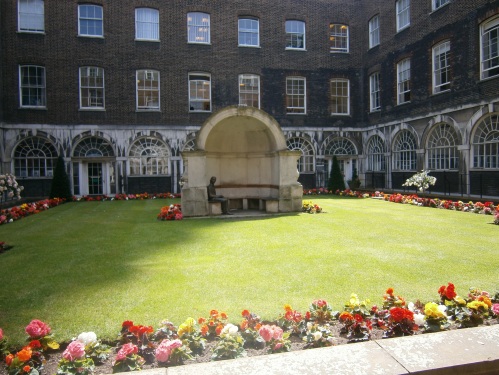 On one of the days I was in London, I wandered around the southern and eastern parts with Lavie Tidhar. Quite by accident, as I was walking to meet him, I came upon the house that John Keats had lived in while he was studying medicine at Guy’s Hospital. The hospital is still there, and I walked around it a bit. I saw the monument to Keats (that’s the second picture). It’s a strange monument, isn’t it? Keats is sitting there alone, although you can sit on the bench next to him. I wonder how alone he was in his life? I always think of him as essentially lonely, although perhaps I’m wrong. Perhaps my impression comes from knowing that his poetry was not well-received, at first. And he died so young that there wasn’t much more than “at first,” for him.

I was thinking about this today because Ophelia and I went to visit a childhood friend of mine, who lives in the suburbs of Budapest. She followed a path that is similar to mine: she has a law degree and is doing a PhD. She’s not a writer, but the similarities made me think about my own life. What would it have been like if I had grown up in Hungary?

The suburb she lived in was lovely, with houses painted in shades of yellow, orange, and green lining streets shadowed by poplar and linden trees. It was peaceful, quiet, about a half-hour outside of Budapest but on the subway line. It had parks where children could play. And I wondered if I would be living in a Budapest suburb, or perhaps still in the city itself. What would I have studied? Would I be a writer, and if so, would I write in Hungarian? (Surely I would write in Hungarian.) Would I, when the borders opened, have left for England or another European country?

And I thought (this was the conclusion I came to) that for all its turbulence, I would not change my life. I would not choose to be anyone else, or in any other place. Everything I’ve gone through had brought me to where I am now, writing my stories. I would not trade those for anyone else’s stories.

After all, out of all of Keats’ turbulence, came this:

Bright star, would I were stedfast as thou art —
Not in lone splendour hung aloft the night
And watching, with eternal lids apart,
Like nature’s patient, sleepless Eremite,
The moving waters at their priestlike task
Of pure ablution round earth’s human shores,
Or gazing on the new soft-fallen mask
Of snow upon the mountains and the moors —
No–yet still stedfast, still unchangeable,
Pillow’d upon my fair love’s ripening breast,
To feel for ever its soft fall and swell,
Awake for ever in a sweet unrest,
Still, still to hear her tender-taken breath,
And so live ever — or else swoon to death.

2 Responses to The Keats House