I think there are two ways to experience a foreign country. One is to see it: to go through in a week or less, seeing all the important sights. You can experience a great deal that way, but to be honest, I’ve never particularly liked it myself. It gives you a superficial sense of what that country is about. You’ve “done” Rome or Paris or London. And your sense of that country is largely of the past: you rush through the Acropolis without getting any sense of modern Greece. The other way is to stay for a while, to live the life of that country. That’s what my family has always done, although I have to admit it’s been because staying is cheaper rather than by conscious choice. It’s cheaper to live in a place for a while, to stay in a rented apartment or with friends.

That’s what we’re doing on this trip, a lot of staying. Right now Ophelia and I are staying with my father in Debrecen, and instead of a hotel meal, I’ve just had a breakfast of fresh yogurt made by a local grocery store, with strawberries in it. I’m going to be staying in London as well, although that trip will involve a lot more going around to see the sights. But I have friends I’ll be meeting up with, so I’ll get a sense of the place, of how people live and move around there now, rather than rushing from Buckingham Palace to Herrods to wherever else I might go.

I thought I would post some pictures from last night, when we went out to dinner at a restaurant in Debrecen. I had something called Hussar Soup. I should have written down its name in Hungarian, but I’m afraid I forgot to. I’ll try to remember next time.

The hotel that the restaurant was in even displayed the uniforms of the hussars that the soup had been made out of! Actually, it was a sort of oxtail soup. The oxtail was served separately, with the best horseradish I have ever tasted. The soup was a delicious broth with dumplings and vegetables, and you could add the meat or eat it separately. But the uniforms are in fact the real uniforms of two different Hussar regiments. 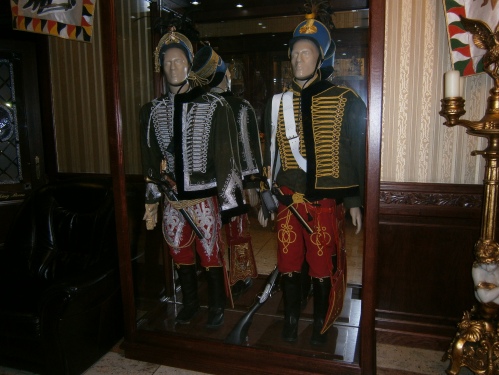 For dinner, I had something called Túrógombóc, which is a kind of cheese and semolina dumpling. What I like about the desserts in Hungary is that they’re not too sweet. The Hungarians do not have a Death by Chocolate. (I would much prefer Death by Dobos Torte anyway.) But these dumplings tasted light and delicious, while not being at all light really. My goal in Hungary is simply not to gain weight.

At least in Budapest I’ll be walking a lot. Here in Debrecen, I’m out in a small village, separated from Debrecen itself by forest and fields, and there isn’t anywhere to walk. It’s the hazard of the suburbs, which I know so well from the United States. There’s something I have to confess here: I think that food in Hungary, including the food you find in the grocery stores, simply tastes better than food back home. After dinner, we did go walking for a while, through downtown Debrecen. 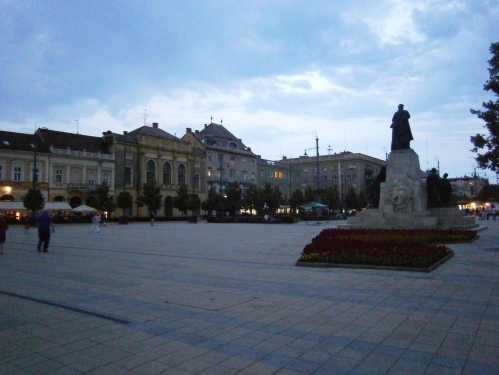 It was getting dark, but I took pictures of the main square and the Protestant church. Hungarian buildings are often painted these interesting, distinctive colors. They are almost Van Gogh colors. I think the Impressionists would have loved them. It’s rather wonderful to have a church this large painted a sort of canary yellow.

You can’t see the color very well here, I’m afraid, because I took the picture at twilight. In the square itself, there was a girl singing Hungarian folk songs. She was young, around twelve or fourteen, but she had a strong voice, and she sang with that distinctive, almost harsh intonation that Eastern European folk songs tend to have.

And those are all the pictures I have for today. Tomorrow, the adventure continues. But it’s the adventure of living in a place, rather than simply seeing it. I think that teaches you so much more.

2 Responses to Seeing vs. Staying