I’m going to go back to writing about social class, really I am. But something happened yesterday that made me think, and I want to put some of that thinking down. I was testing the camera on my new BlackBerry, and I took a photo of myself. You know, the traditional photo in the bathroom mirror. It looked like this: 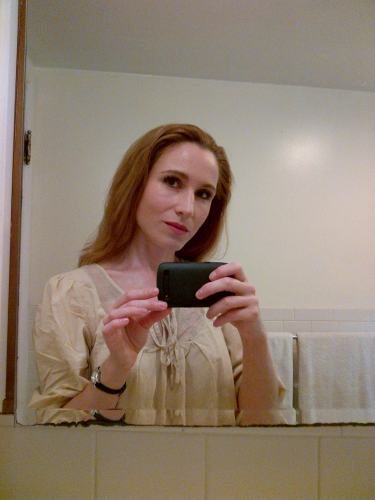 In the caption, I mentioned that this was a photo with no professional makeup artist or photographer, taken in harsh bathroom lighting after I’d been refinishing furniture for hours. I was making fun of myself. What surprised me was that it got quite a lot of responses, and many of them used the words “natural beauty.” Quite a few of them also mentioned that I looked just fine without makeup. Now, I had said without a professional makeup artist. Of course the woman in the picture is wearing makeup. If she weren’t, she wouldn’t look natural, because the harsh light would have washed her out completely. (And by her, I mean me, of course.) But what really caught my attention was the concept of natural beauty. It reminded me of a comment someone had once made on a photograph of mine that I had posted on Facebook. It was, “I love the red hair. I hope you are natural woman.” I’m not sure on what basis he was hoping that, because the photograph he was commenting on was heavily photoshopped. I had meant it to be edgy, not natural. Here it is, in case you’re curious:

Granted, he was probably talking about the color of my hair. But I remember my first response to the words “natural woman”: I thought, you’ve got to be joking. Because in the modern world, there is no such thing as a natural woman.

And then I thought about all the things about me that were unnatural, from my toes up to the top of my head. Even if you took the curls out of the hair (because my hair was curled that day), there would be the haircut. Hair is not naturally cut in long layers by a genius named Robert, but mine is. And you would have to remove years of the sunscreen and moisturizing creams that have made my face what it is, because faces look very different without that sort of daily care. And you would have to replace about half of the eyebrows. Also, unmanicure and unbuff the nails, unmoisturize the hands and feet. But even if you did all that, you would have to take away all the years of dance that make me stand and move the way I do, of pilates and watching what I eat that give me the shape I have. Because none of those are natural either.

Since I was a child, I have been created and constructed, as we all are. I believe in the concept of natural beauty, but I think only children have beauty that is truly natural. The rest of us are made, like mad scientists’ monsters, but in this case the mad scientists are custom and society. When they go too far, we become truly and frighteningly artificial, like certain celebrities. But when we go only as far as we need to, and people say that we have “natural beauty,” what they mean is really that we have constructed something that looks like nature the way we wish it were, nature in a dream, the way a beautifully manicured park can look like nature at her best.

I wrote in a note to myself, earlier today, “There is no such thing as a natural woman, because being a woman is performative.” But beauty is a sort of performance as well, a sort of dance that takes place over time. Women, in particular, learn the steps when they are young, as I learned it back when my mother used to tell me, “You must suffer for beauty.” (No, I’m not joking. That’s exactly what she said, and I bet all European mothers, and many American ones, say exactly the same thing!)

If there is truly natural beauty in a woman, it’s not what we think it is. It’s at the level of the bones. Shortly before she died, I visited my great-grandmother. She was almost bedridden at that point, a ninety-year-old woman with white hair haloing her face. But lying on her pillow, she was beautiful: that beauty was written into her bones, which were more prominent than they had ever been in her life. They were sharp and delicate and lovely. But that is a beauty closely allied to death. It is the opposite of the natural beauty of a child.

I’m not sure where this train of though has led me, except back to where I often end up: the idea that beauty has a necessary darkness to it, that it is allied to our mortality. Which is probably as good a place as any to stop.