I asked my mother about some of the things I had written yesterday, and she gave me some more information on my family. I thought it was quite interesting.

Evidently, I’m related to the Romantic-era Hungarian poet Dániel Berzsenyi. According to Wikipedia, “Berzsenyi was one of the most contradictory poets of Hungarian literature. He lived the life of a farmer, and wished to be close to the events of Hungarian literature. This contradiction, which he believed he could solve, made him a lonesome, introverted and bitter poet. His works show signs of classicism, sentimentalism and romanticism.” Pretty neat, hunh? When I’m in Hungary, I’ll have to find some of his poetry.

I’m also related to the nineteenth-century statesman Ferenc Deák, who was a Minister of Justice and important in the political events of the early 1800s. Evidently, “0ne of the central squares of Budapest, Deák Ferenc Square is today named after him, which is where the three lines of the Budapest Metro come together.” Also, he’s on the 20,000 forint. Here he is:

They are both on my grandmother’s side of the family, which was the noble side. My grandfather’s father was a teacher, as I mentioned, which I assume means he had a university education. He was in World War I and came back with one leg amputated. My grandfather’s mother was a “wealthy peasant” (my mother’s words, and for her I think the term peasant has a specific meaning, because we don’t usually think of peasants as wealthy). She was the one who brought money and property into the family. My grandfather was the oldest son, and oldest sons were usually trained as agricultural engineers, which was a university degree, so they could manage the family estate. But that property was confiscated under the Communists.

Some of my grandmother’s family came from Győr, where they owned a “small palace” (my mother’s words again, because what is a small palace?). The man with the sword was my grandmother’s grandfather, and the men in that family were lawyers, judges, administrators. People in those sorts of positions all had ceremonial swords, says my mother dismissively. I’m not absolutely sure, but I think this is a picture of the specific palace: 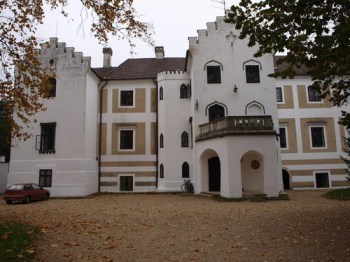 It’s a museum now, so you can go visit. Napoleon once stayed there, and a desk he wrote on is still in the palace. I think my ancestress Katalin actually lived there.

Also, there was a physician in the family, I’m not sure on which side, who was kidnapped by a bandit and forced to tend to his wounds. Afterward, he was paid and released.

It’s all pretty romantic history, but I think many families have romantic histories of one sort or another. The more recent history is less romantic. Under Communism, my grandparents on my mother’s side lived in Budapest, in an apartment across from the National Museum. The windows look out onto the park. The apartment has two large rooms, a living room and a bedroom. My grandparents slept in the bedroom, and their two daughters slept in the living room. There was also a kitchen and a bath. In the summers, they went to Lake Balaton, to a summer house that my grandfather built himself. I think it still has no heating, and at that point I’m not sure it had electricity or gas to cook on, although it must have had running water. They cooked outdoors. They were as poor as everyone was under Communism. I don’t think my grandparents ever owned a car in their lives, although of course Budapest had a subway system and there were trains all over Hungary.

Eventually, my mother went to medical school, where she met my father. And that’s what she had when she left the country with her two children: a medical degree. That’s what allowed her to build a new life for herself in the West.

I think you could call both of my parents workaholics and overachievers.  My father is an MD/PhD, a medical doctor and research scientist, faculty member at the Medical School of the University of Debrecen, and international expert on hemostasis and thrombosis (no, don’t ask me what those are).  Do you think he’ll mind if I link to his official university webpage?  I hope not.  (I would ask him, but who knows what country he’s in today.) And then there’s my mother, who is an MD and JD, because at some point she decided that she also wanted a law degree.  So she became a lawyer and patent attorney. Yeah, that’s what I came from. So you can kind of see why I ended up with a JD and PhD.

I think that’s enough for today. Tomorrow, I’ll try to write about what it was like growing up in the United States, coming from that background.  You know, growing up with the assumption that at any moment, the Russians could come and take over your country. In which case you would lose everything: all that was truly yours was your education, because it was in your head. It was the one thing no one could take away.

11 Responses to The Immigrant Class: Part 2