The title of today’s post comes from a line in a blog post by Justine Musk called “How to Be a Genius (Or Just Look Like One)“:

“Style is the story you tell about yourself to the world.”

In it, she talks about the style of Coco Chanel, and I’ve written about Chanel before myself. She had extraordinary style. If you are a woman, look into your closet: you will find any number of items influenced by Chanel. As I type this, I am wearing a black knit cardigan over a black knit shirt. Chanel. (Also jeans and Keds, which I’m sure she would never have worn, but she did give us women who dressed like boys – and that’s how I’m dressed today, by late nineteenth-century standards. Like a boy ready for sports. A late nineteenth-century woman would never have worn what I’m wearing.  It was Chanel who gave us sportswear for women.)

Why did that line catch my attention so much? I suppose because I like to watch people, and so often I find that how they present themselves tells a story – the story of what they think of themselves. Where they see themselves in the world. People tend to place themselves, and style tells you about that place – where it is, what it’s like.

I was thinking of the second today because I recently met a person who told me that he had installed a flat-screen television in his bedroom so he could watch sports. And in the same conversation he told me that his family used paper napkins at dinner. And I realized that was the opposite of how I had grown up – we had no television, because my mother was convinced that it would ruin us intellectually, but we ate with the family silver. And always had cloth napkins. Those are both choices, and the universe won’t end if you choose not to have a television (although if I didn’t have one now, I’d miss watching Once Upon a Time, or Being Human on DVDs – the BBC version, of course) or use paper napkins. But your choices do reveal your priorities.

I bought two things recently that I thought were very much in my style. The first is an old bowl, probably late nineteenth or early twentieth century, with red transferware and hand- painted details. 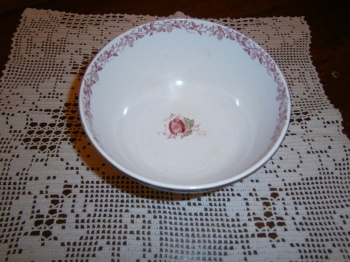 I think it’s rather pretty. The second is a set of silver plate with a flower pattern on the handle. 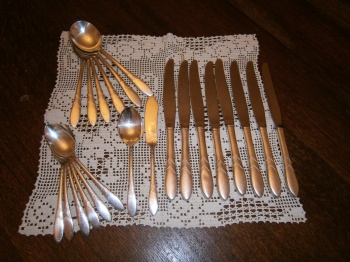 These are both things I saw and fell in love with, in one of the antiques stores in Concord. I think style is like that: it’s organic, made up of the things you love, the things that are important to you. But it’s also something you can think about and develop. Because style is a story we tell about ourselves to the world, and that story is always changing. In a way, if you change your style, you can change your story. So if you want to change that story, if you want the world to perceive you differently, or you simply want to feel differently about yourself, you can do it by changing the way you look, the way you put together your surroundings.

Style is something fun, individual. Or is should be. (Shouldn’t the story you tell about yourself to the world, and to yourself, be fun, individual?) And style is also a process of self-discovery.

What I’ve been thinking about recently is how I want the three aspects of my style to work together. To express who I am, or think I am. I spent a lot of time being confused about that, trying to be who I thought I should be – who people seemed to want me to be. But at some point in your life you have to discover, or perhaps decide, who you are. And that’s when you find your personal style. That’s when you realized the story you want to tell the world about yourself.

And I think that’s important – thinking about that story, because we do all have our stories, and we’re always telling them, whether we’re aware of it or not.

I know this isn’t a particularly coherent post: I’m trying to talk about something I’m just beginning to think about, and that makes for some incoherence. But the idea of style as story is a powerful one – and one I want to explore further, because I’m a storyteller, and because I think stories are how we come to know ourselves.

4 Responses to Style as Story