Today, I read an article titled “The Unleashed Mind: Why Creative People are Eccentric.” I’ve linked to a preview of it on Scientific American. Here is the abstract:

“People who are highly creative often have odd thoughts and behaviors – and vice versa.

“Both creativity and eccentricity may be the result of genetic variations that increase cognitive disinhibition – the brain’s failure to filter out extraneous information.

“When unfiltered information reaches conscious awareness in the brains of people who are highly intelligent and can process this information without being overwhelmed, it may lead to exceptional insights and sensations.”

That seems intuitively right to me. I think it’s fair to assume that I would test highly for creativity on the sorts of tests the article mentions (I mean, I am a professional writer). And I know that I test highly for intelligence (since I was tested for the school gifted program, and let me just say that I think there are a lot more important things in this world than scores on an IQ test). And I do think I’m eccentric, although I’ve learned a series of social conventions, as we all have. And I generally follow them, although I think I’m more aware, than most people, of their constructedness.

But cognitive disinhibition: I know exactly what the article is talking about. It’s that sense of having one layer of skin fewer than most people. Of being extraordinarily sensitive to incoming stimuli, whether it’s ideas, music, even the weather. It makes life just that little bit more challenging.

On the other hand, it can also lead to exceptional insights and sensations.

What I wanted to talk about today were people with extraordinary lives, but I think you could classify them as exceptionally creative people as well.

Two days ago, I watched a PBS documentary called My Life as a Turkey. (You can watch the full documentary by following the link.) Here is a description:

“After a local farmer left a bowl of eggs on Joe Hutto’s front porch, his life was forever changed. Hutto, possessing a broad background in the natural sciences and an interest in imprinting young animals, incubated the eggs and waited for them to hatch. As the chicks emerged from their shells, they locked eyes with an unusual but dedicated mother. One man’s remarkable experience of raising a group of wild turkey hatchlings to adulthood.”

I’m not sure why, but he reminded me of one of my favorite artists, Patrick Dougherty, who creates art that looks like this: 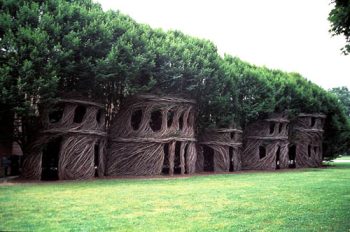 Hutto and Dougherty are both creative, eccentric people. (Who spends a year in the company of wild turkeys? Who builds houses out of sticks?) They both live extraordinary, although very different, lives. (Hutto lives with wild animals. Dougherty travels to museums and public spaces all over the world to create his art.)

I think you only do the sorts of things they do because you feel compelled – you feel as though you have to do it, that doing it fulfills some deep and fundamental desire within you. It’s the feeling that you’re doing the thing for which you were made – and that feeling creates a sense of happiness, of joy.

The article says that people who are highly creative are more prone to magical thinking, and I think that’s true as well. What I just wrote is an example of magical thinking, because I actually believe in it: I actually believe that the universe calls us (maybe not all of us, I don’t know, but at least some of us) to do something, and if we do that thing, that’s when we are happy. And that’s when we can bear with all the negative things – pain and loneliness and all the things creative people are prone to.  (That we are all prone to, but that creative people often feel most acutely.) When they are in the service of a higher goal.

I don’t know if I’ve had an extraordinary life so far. It’s been unusual, certainly. But I am at least aiming to do some extraordinary things. Like, you know, write stories that people will want to read, that they will relate to.