Recently, several friends have told me about medical problems they’re having, or their family members are having. Hearing about those problems has made me grateful for a number of things.

First, for my own health. I’ve had one medical problem in my life: appendicitis. I still remember the resident telling me that the surgeon was going to make the smallest scar possible, so I could still wear a bikini. (I never wear bikinis.) Otherwise, I’ve been ridiculously healthy. Oh, I’m tired, and over the last few weeks I seem to have gained five pounds, but those are things I can take care of. Blood pressure and cholesterol and those sorts of things are well within normal range.

Second, for my daughter’s health, and for my daughter in general. I wonder, sometimes, how I ended up with such a brilliant, beautiful child. Sometimes, I admit, I worry about that beauty. She’s used to strangers stopping in the street and remarking on how beautiful she is. (Hair the color of copper, and eyes like rain.) But she makes robots and writes stories and wants to be a paleontologist, and she’s most of the way through the Harry Potter series. Those are more important than beauty, I think. (Her rock collection is getting ridiculous.)

Third, for the education that allows me to pursue the profession I love – writing, and teaching about writing. It’s taken me a long time to get my degree, but I’m grateful to have it, and to be able to do work that I find intellectually fulfilling. Even though sometimes I get tired of grading papers. But when you teach, every day is different, and you spend your time talking about ideas, and you interact with students – and I like students very much.

Fourth, to have a life that is opening up in front of me, like a set of double doors opening to a landscape in which you can see woods and fields, and a road running through them, and in the distance mountains. And you don’t know where the road will lead, but you know that at least there will be adventures.

I don’t feel grateful all the time – there are days when I don’t feel grateful at all. When I just feel tired and angry at the world, and I could go around knocking people’s hats off. (If they still wore hats.) So I’m writing this to remind myself, because I know there are friends of mine who have been in much more difficult situations, and I do know, despite any grumbling, how very fortunate I am – to be in a position to make the life I want to live happen. Many people never get that opportunity.

Once, after telling a friend of mine the problems I was having, I said that despite them, I felt very fortunate – that my problems were so much smaller than most people’s. He became angry with me, I suppose because he thought I was somehow avoiding them. But that wasn’t it at all. I was simply being grateful. I think gratitude is a very useful emotion to have. It puts things into perspective.

Another friend of mine and I decided recently that we were going to try to changes our lives, and support each other through that effort. Part of that effort, for me, will be getting back to dance. I haven’t been to a dance class for two weeks now, because I’ve been so incredibly busy. But it’s time to go back.

So I will spend part of the weekend looking like this: 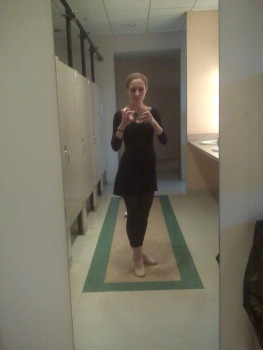 6 Responses to On Gratitude