It’s been a long, tiring day, so I’m just going to post a few pictures from this weekend.

I took two buses to get to New York. I wanted to take pictures of the three bus stops, but I only ended up taking pictures of two. Here is the first one, where I’m waiting for the bus to the station. It looks so rural, doesn’t it?

And here is the second one, where I actually got on the bus to New York.

The third one would have been Penn Station, but I was so absorbed in finding my way to the subway that I completely forgot. Oh well. You can see that I was moving from the rural to the urban. And just so you get a sense of the urban, here you go:

That’s from across the reservoir in Central Park. I took it on Friday morning. I had just taken the cross-town bus and was walking down to the Met, where I was going to meet Helen Pilinovski, who is a wonderful academic and scholar. We were going to the Alexander McQueen exhibit. On my way, I passed the Gugenheim, which was looking lovely as usual.

Well, that day didn’t work out quite as planned. Although we arrived at 10 o’clock, the line was incredibly long.  It would have been a four to five hour wait to get into the exhibit.  You can see how busy the museum was that morning:

I particularly like the long, light-filled balconies, where there are all sorts of vases and ornaments in glass cases.

And then we went thrift shopping, and then we met Ellen Kushner at a bookstore filled with first editions, including of that odd book, Christina Rossetti’s Speaking Likenesses. And then I came back to rest. I had walked all over New York, and I was very tired.

There was no exhibit for us that day, but we were determined to see the Alexander McQueen exhibit, and you can’t keep two resourceful women from a museum exhibit they have decided to see. We decided to split the cost of a museum membership and come back the next morning, when there would be extended member hours. So there we were, bright and early, in line at 7 o’clock. Here is what the museum looked like this morning, when I arrived: 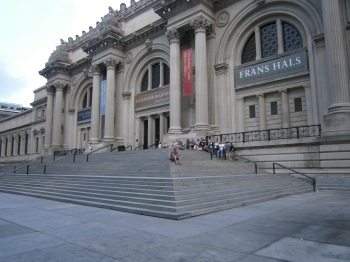 Of course, we lined up at the members’ entrance, where we were third in line. They let us in at 8 o’clock, and we wandered around the exhibit for an hour. Then we went for brunch, and this afternoon I had coffee with Ellen Datlow, who is one of my favorite editors. There were so many people I wanted to see in New York, and I only got to see a few of them. But I’ll be back soon.

I’m not going to describe the exhibit tonight. I’m going to try to write about it tomorrow. It was gorgeous and overwhelming, and I want to do it justice. But tonight you do get at least a few pictures of New York. It’s been wonderful being here.