Status report: Yesterday, I tried to get back to work, but I was so tired that I spent most of the day sleeping. I was still recovering from Readercon. Today, I did get back to work. I had to. I don’t want to get too far behind.

First, I went to the Boston Public Library to check some quotations. They were from a book called The Aborigines of Tasmania by H. Ling Roth, published in 1890. That’s the sort of book you can’t check out of the library. I sat at a table and compared the quotations in my chapter to the original, to make sure they were right. I had gotten them from the later edition, and sure enough, some of them had changed between editions, so I corrected them and made sure I was citing to the right pages. That’s the tedious but necessary sort of work that you sometimes have to do, in any sort of academic writing. I do it as well with my Folkroots column: make sure everything is right.

Here is my chapter on the library table: 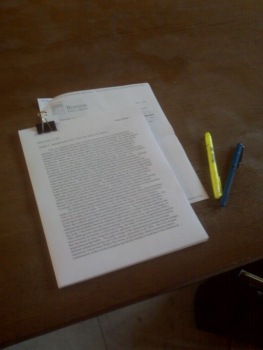 And here is The Aborigines of Tasmanina, 1890 edition: 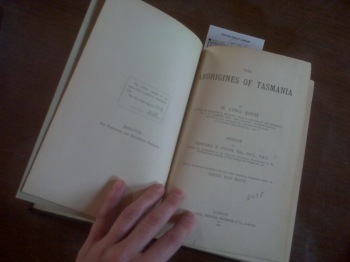 And here is the Boston Public Library: 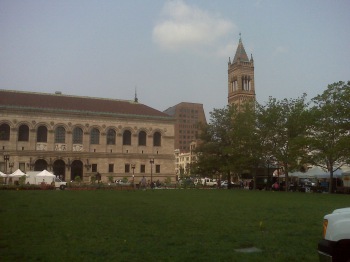 Afterward, I walked around Copley Square for a little while and took some pictures. If you’ve never seen downtown Boston, this is what it looks like. There was a farmer’s market being set up, but it wasn’t open yet. I saw gooseberries and currants, which you can’t get anywhere, not even at Whole Foods. 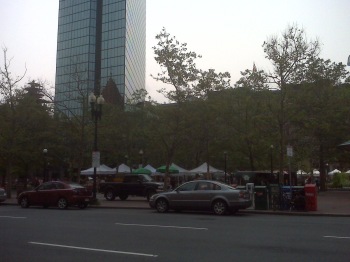 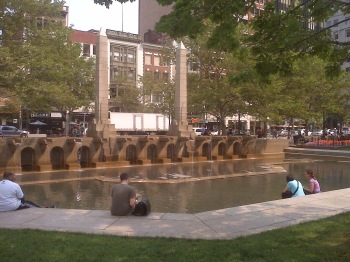 And then I went to the Boston University Library to drop off the books I had read for Readercon panels, and to pick up a book for my next Folkroots column. (I think the next column is going to be on magical plants.) While walking through the library, I saw a case with all sorts of material from Samuel R. Delaney. In the first one, in the lower left hand corner, you can see a picture of him from 1961, looking particularly hot. (Is it insulting to say that about a brilliant author? Somehow, I don’t think he would be insulted.) 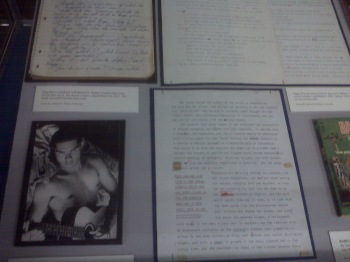 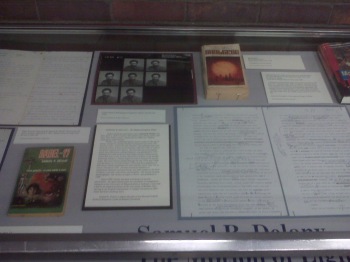 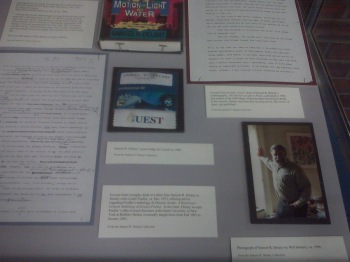 It was fascinating to see the typewritten manuscripts, the old editions of his work. And to be perfectly honest, it made me wonder if I would ever write something worth putting in a case, worth archiving. I rather hope so.

This is probably the right place to say that over the weekend, while I was at Readercon, I read some rather nice things about works of mine. Do you remember that my story “The Mad Scientist’s Daughter” was a Locus Award finalist? Well, it didn’t win, but according to my July Locus, it came in second after Neil Gaiman’s story. That’s a pretty good place to be! Also, Rich Horton wrote a lovely review of “Pug,” which is in the July issue of Asimov’s. Rich wrote,

“‘Pug’ by Theodora Goss is set in the background of one of the most famous novels of all time (readily enough recognized that I’ll not mention which one). The eponymous dog (who seems perhaps to have escaped from another novel by the same author) has a unique characteristic: he can travel to other worlds. Eventually the heroine of this story, a rather colorless and sickly girl, follows him, which perhaps gives her a life otherwise denied her. The story nicely elaborates on the circumstances of its heroine, and is just fun to read for Goss’s prose, and for the pleasure of unpicking the relationship with its source material.”

He also includes it as one of his recommended stories for the month.

And finally, and this is important and a bit overwhelming, at Readercon I bought a copy of Gary Wolfe’s Evaporating Genres. There’s a chapter called “Twenty-First-Century Stories” co-written with Amelia Beamer, and it focuses on five writers: M. Rickert, Elizabeth Hand, Kelly Link, Jeffrey Ford – and me. That is amazing company to be in, and it’s amazing to be included in such an important critical consideration of what is happening in literature right now. Wolfe and Beamer write (yes, I’m using their last names, because we’re being scholarly now),

“Writers like Ford, Rickert, Goss, Link, and Hand – all early- to mid-career writers – are developing a new, twenty-first-century paradigm, a fiction beyond postmodernism, a fiction for the unstoryable, or as yet unstoried, new century. Choosing broadly from the narrative toolbox, such tales are often metafictional, with self-aware and emotionally powerful storyteller voices. Unlike the often coolly ironic surfaces of much postmodern fiction, they are often funny or heartbreaking, although they are comfortable with mystery and irresolution – which is not to say that they have no plot or story; unlike some postmodern or contemporary mainstream fiction, these narratives tend to have plots and characters, not just style and voice.”

And you know what? Grandiose as it may sound, getting beyond postmodernism is something I’m actually trying to do. I feel as though I’m trying to find a new path, influenced by the writers Wolfe and Beamer are kind enough to include me among.

The thing about praise, for me, is that it always spurs me on to work harder, try more. And once this dissertation is done, that’s exactly what I’m going to do. Just wait.

5 Responses to Back to Work