My computer is back!

I can’t tell you how lovely it feels to be cruising through cyberworld at my usual speed. Like something out of Blade Runner, or am I thinking of some other science fiction movie?  The Fifth Element, perhaps?

I thought that I would post a few pictures I took during that time and could not upload. Just to catch up.

First, here is me on the day I relinquished my computer to IT, actually on the way there. I don’t think I’ve ever looked so bedraggled in photographs I’ve uploaded here.  (Well, except for ones taken first thing in the morning, or in which I had green goop on my face.  But those were deliberately bedraggled.) This is me tired, frustrated, worried, on a day when I’d like to be working but on which I had to drive an hour to drop my computer off at the computer hospital.

And here are some things that cheered me up during that sad and lonely wait. First, after dropping my computer off, I went into the Boston University Barnes and Noble, and guess what I saw? Happily Ever After on the shelf, as a staff pick! 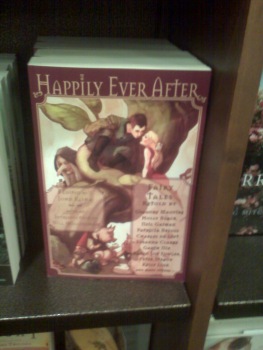 And remember when I said that I mended a tiered skirt? Well, this was the skirt.  It’s made of a soft, swingy brown corduroy. It has all those tiers, and some of them were coming apart just a bit, so I had to sew them back together. 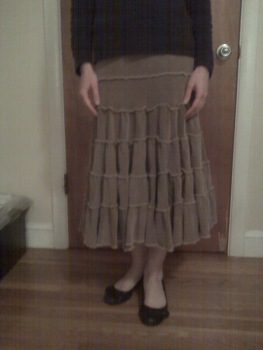 And I didn’t mention this, but during that time I bought two pillows. I don’t usually buy things out of frustration, but this time I have to admit that it did happen. But I like the pillows.  They have geraniums on them, and the colors match – well, everything else I own. Here’s one behind Dani (the bear I got on my first birthday), on the mission-style chair in my room.

And finally, I didn’t mention this either, but another thing I did was restring some of my pearls. In my family, girls are given pearls. I got mine when I was sixteen. Ophelia has already gotten hers. I had decided years ago that I did not like how mine were strung, so I took the strand apart but never put it back together. One night while my computer was being attended to, I sat down and restrung some of them, knotting the silk as one should between pearls, attaching a silver clasp. This is about eighteen inches, and I should have enough for another shorter strand. (I was given quite a lot of them, a long string. But I simply never wore them that way.)

No, I don’t actually wear pearls around the house, especially not when I’m writing. (How can you tell I’m writing? The glasses. The hair up, out of my way.) But these had lain for a long time in a tin, and they weren’t as lustrous as they should be. Pearls warm up, take on a shine, when they are next to skin. So I wore them today to get them to their usual pearliness.)

This is a nothing, an amuse-bouche of a blog post. A sorbet. So I’m going to post something else somber and serious, I promise. But I’m giddy with relief at having my responsive instrument back, on which I can type so quickly, which is such a part of my life.

1 Response to Catching Up