I’m home from Wiscon. I woke up at 3:00 this morning for a 6:00 a.m. flight. And of course I had parties to go to last night, so I got only about two hours of sleep. As soon as I came home, I went to bed. Now I’m sitting here listening to S.J. Tucker’s Blessings, about which more later. And catching up on this blog.

On Saturday night, I went to the Fairyland party. Here are some pictures from before the party itself, when we were setting up and when people first started coming into the room. 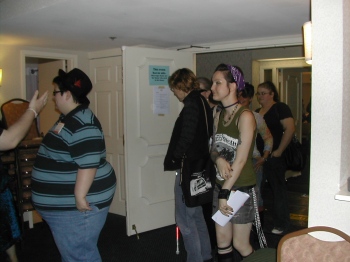 Once the party began, the room was absolutely packed. What do you expect, when S.J. Tucker and her friends are singing? The party ended with Seanan McGuire singing “Wicked Girls,” which as you know is my personal anthem.

I’m happy to report that both of the dresses I brought did get worn. See? (Yes, these are photos in the bathroom on the first floor. I find my full-length mirrors where I can.) 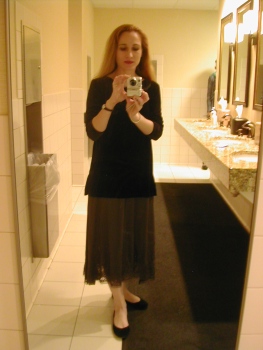 Notice that with the second dress I wore flats (sacrilege!). That’s because on Saturday, I injured my foot. No, I didn’t kick anyone. Somehow, I pulled the muscle right behind the ball of the foot, the one that you use as a dancer to go up on your toes. (At least, I always feel it there in dance class.) By Sunday, I was limping. So this picture isn’t entirely accurate. In the evening, I actually walked around with one shoe on, carrying the other in my hand. And I spent as much time as I could with my foot on one of these:

After my relaxing Saturday, Sunday was very, very busy. In the morning, I had a reading with Haddayr Copley-Woods, Mary Rickert, Marguerite Reed, and Kat Beyer. I was surprised at how many people turned out that early. It was a very good reading and gave me another chance to read from “Pug,” which is currently out in Asimov’s.

That afternoon, I had three panels back to back. The first was a panel on anthologies moderated by Sharyn November. Advice to new convention goers: if Sharyn November is on a panel, go! I learned so much simply from being on that panel and hearing her speak. My second panel was on how being able to access research so quickly has affected writing, which was quite interesting. It turns out that I’m not the only one who writes with the internet available, so I can go over and quickly research what the characters would be eating for lunch at a pub in Cornwall. But we also talked about the need for more extensive research, when you’re writing a novel and you need to establish a firm understanding of the world your characters are going to be moving around in. The final panel was on “indigenous” American fantasy, and I was the moderator. We talked about what indigenous means, why Native American mythical and religious figures and themes don’t appear more often in fantasy, that sort of thing. It was one of the most interesting panels I think I’ve ever moderated. And if you ever have a chance to moderate a panel with Andrea Hairston, know that it’s going to be easy: she always has such terrific points to make. It’s good when a panelist has strong opinions but is also thoroughly informed. That’s the best kind of panelist, I think.

Then I got ready for what I always think of as the banquet but is actually the Tiptree Ceremony and desert salon. That’s where I wore the burgundy velvet dress. And then, there were the parties.

So now you know what I did at Wiscon. Two more things, though.

First, I bought the most beautiful painting, by the artist Ingrid Kallick. It’s called The Green Man’s Final Hours.  I saw it in the art show and knew I had to have it.

I wish I could have gotten a better photograph of it. It’s absolutely beautiful, acrylic and oil on top of a graphic print, I believe. I actually ran into the artist, in the same bathroom in which I took the pictures of my dresses, of all places. I would have liked to talk to her more, but I was between panels, rushing. That’s the one thing I splurge on at conventions: art.

I also bought one other thing: the CD Blessings, by S.J. Tucker, which has one of my favorite songs on it: “Witch’s Rune.” Here it is. If you like this blog, I think you would like this song.

That’s my Wiscon report. And that’s all I can write at the moment. I’m back, but quite sick, and need to go lie down again. So I can get some rest.

One final thought. Catherynne Valente and I were talking about blogging, about what our blogs provided, what made them appeal to readers. She said that what her blog provided was sincerity, which I think is absolutely right and an important insight to have. Cat’s blog is always absolutely sincere. That started me wondering: what does my blog provide? I’m not entirely sure, but I hope it provides at least a bit of enchantment. You can come here to see or learn about something beautiful, like Ingrid Kallick’s paintings or S.J. Tucker’s music. And then, you can incorporate those things into your own lives.

7 Responses to Sunday at Wiscon