We were talking about deliberate practice, and it seemed to me that deliberate practice, for a writer, would involve more than working on sentence or scene structure, for example. It would involve practicing to be creative. So I was thinking about how I could do that, and it was the end of the day, the sun was in the process of setting, and I thought, why don’t I take a short walk and notice things? And since I had my camera phone, I took some pictures.

So the first thing I did was notice.

The moon in the sky.

A yellow house with lace curtains. 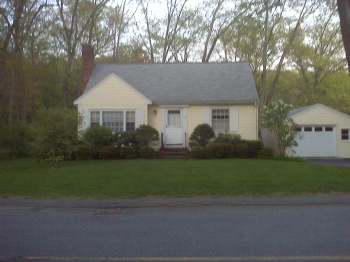 A white and purple iris in a garden.

Some small white flowers in a field.

And finally, the deer grazing behind the house. 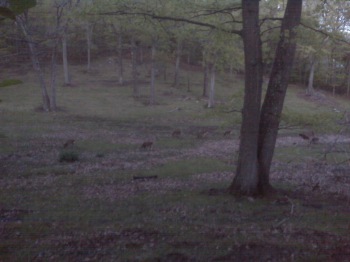 And then I thought, I wonder if I can make a story out of those pictures. What sort of story could I make out of them?

So the second thing I did was create a story.

I think the moon gave me the idea to create a murder mystery. It was looking so lovely and ominous, both. Here it is, the moon, looking ominous on the night that Amelia Price is murdered.

Amelia lives in a small yellow house with her aunt, Emmaline Price. Doesn’t this look exactly like the sort of house that would be associated with a murder? The neatly mowed lawn, the lace curtains. Amelia had just finished her third year of college. She was going to Harvard. It’s a pity that such a promising young woman was struck down in the prime of life, three weeks before her twenty-first birthday. Struck down is a euphemism. She was actually shot.

Emmaline is the housekeeper for the Frobishers, who live up the hill. We can’t get a picture of their house because there is a gate. We can’t just drive by it. The Frobishers are wealthy. There are three of them: Elaine Frobisher, who is a widow, and her two sons, Lance and Galahad Frobisher. I know, Galahad. But Elaine loves The Idylls of the King, so she named her sons Lancelot and Galahad. Lance works at the law firm his father founded. He was Amelia’s boyfriend until they broke up over Thanksgiving break. Galahad is in college at Princeton. He has always had a crush on Amelia, but she wouldn’t have anything to do with him. You see, he’s shy. And he stammers. After her break-up with Lance, he wanted to console her, but she just laughed at him.

On the night of the murder, there was a break-in at the Frobishers’ house. There were a number of footprints left on the flower beds. This is one of the few irises that were not crushed. The Frobisher were at a local charity ball, but Lance says he took a telephone call from a client for an hour and Galahad says he wandered around outside for a while because he hates to dance.  When he came back, he couldn’t find his mother, although she swears she was in the ballroom the entire time.  The butler, James, had the night off. He was at the local bar, and two of his buddies swear that he was with them until they took him home, drunk. The maid, Maire Ross, was there, but she says that she slept through the whole thing. Did I mention that Maire, who is from Ireland and has overstayed her visa, is pregnant with Lance’s child?

Ameila’s body was found in a field, on a bed of white flowers. She was shot at relatively close range, from the front so she probably saw her killer. How can Amelia, the housekeeper’s niece, afford to go to Harvard? Her father, Martin Ames, came from a wealthy family. His mother, Hillary Ames, left Amelia a lot of money in a trust fund. Elaine Frobisher, who was a friend of Hillary, is the trustee. Why didn’t Hillary leave that money to Amelia’s father? Because he’s in jail for shooting Amelia’s mother. He was an alcoholic and shot her one night while he was drunk. He claimed it was an accident, but the jury convicted him of manslaughter. Amelia was really Amelia Ames, but when she went to live with her aunt Emmaline, she took her mother’s name. She was only seven. What no one knows is that Martin Ames was released from jail a week ago. He’s supposedly clean and sober. He’s been sleeping in the woods around the Frobishers’ house, eating the food left for the deer (it’s sort of like oatmeal, and better than what he ate in jail).

There are a couple of other things you should know. James is not the butler’s real name and he has a rap sheet. Lance has been accused of being physically abusive by a former girlfriend. Galahad has pictures of Amelia, a lot of them. He keeps them in a dresser drawer. In her safe, Emmaline has pictures of Elaine Frobisher from when she worked in a gentlemen’s club. Yes, that is a euphemism. Oh, and Amelia was shot with the same gun that her father used to kill her mother.

There you go, a murder mystery. Now tell me who killed Amelia, and why. (I know. But I’m not telling.)

2 Responses to A Murder Mystery