I had no idea how much fun writing the Folkroots column for Realms of Fantasy would be.

I’ve been working on my next column, which will be called “A Brief History of Monsters.” By next, I mean the one after the column that’s coming out in June, which is called “Fairies and Fairylands.” So you won’t see what I’m working on until August, sorry! But I’ll tell you a little about it.

First, a confession: I’m so busy right now that I’m terribly behind at anything that doesn’t have a hard deadline. So if I owe you something, I’m so sorry. (By hard deadline, I mean a publication deadline. Something that absolutely has to be published a particular month. For example, the column has a hard deadline because the magazine has to come out.)

The fact that I’m so busy this month meant that I needed to write a column on something I already knew quite a lot about. I couldn’t just head to the library and research anything that interested me, and that I thought might interest you. Part of my doctoral dissertation focuses on monsters in the nineteenth century, so I’d already done quite a lot of research on monsters, and I knew there was a wonderful new book, Stephen Asma’s On Monsters, that contained a lot of the information I wanted. So, monsters it was.

I knew what I wanted to write, and actually wrote about half of the column based simply on what I already knew. Then I went through Asma. It’s sitting beside me as I type this, with stickies marking important passages. In fact, I’ll take a photograph of it right now and include it at the end of this post. And then, to make sure I was considering all the monsters out there, I enlisted the help of my Facebook friends and asked them to name important monsters to make sure I hadn’t missed any. (Thank you, Facebook friends! You are all awesome!  And you know, I hadn’t even though of the hulda as a monster.  But a cow-tailed woman certainly qualifies.)

Earlier today, I went to the library to pick up some books: a general theoretical work on monsters, a book on Greek and Roman monsters, two books on monsters in the Middle Ages, and Jorge Luis Borges’ The Book of Imaginary Beings. I don’t know how much information I’m going to take from them. After all, I have a 4500 word limit, and I already have about half of that written. But they will help me check and double-check the information I’m including.

Yes, it’s stressful – all the work I need to do at the end of the semester. And yes, writing a column is added stress. But it’s also what I do when I take a break, when I need to do something fun for a while. Because it really, truly is fun to read about monsters and then write about them in a way I think Realms of Fantasy readers will find accessible, scholarly, and interesting.

I love this work! 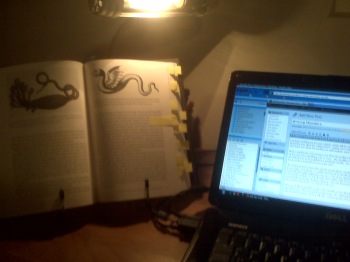