This is school vacation week, and Ophelia has been in Virginia, visiting her grandparents.

Kendrick took her down and brought back a jar of pickled peaches that his mother had bought for me. I finished them today. You can’t find pickled peaches up here, which is a shame, because they really are delicious.

So over the weekend I was completely alone, and this week there have been only adults in the house. The silence has been astonishing. I suppose I’ve gotten used to a certain level of noise. But I’ve never gotten used to it completely. That’s part of the hypersensitivity, that you can’t block out things that other people block out just as a matter of course. It’s as though I’ve been relaxing into the silence.

This experience has made me think about what I need to be productive. I love doing things and going places. But I think that I actually need more solitude and silence than most people. Without it, I can’t think as clearly or write as well. It’s partly being an introvert, partly that hypersensitivity I mentioned, which makes the wrong kind of light, noise, even touch annoying, almost as though it were abrasive.

What I need, what I dream about, is a small place where I can go be by myself and write. (That cottage I keep mentioning.) Where everything is perfectly neat, perfectly orderly. Where I have my favorite books, and the loudest sounds are birdsong and the wind in the trees. Where all the colors are muted, where all the furniture is worn. Where there are blankets in a wicker basket. Where it’s warm. I suppose we all want a refuge from the world. I think I will need one in order to do the work I want to do.

What is it that we really need, to work well? Time, and rest, and a place to do that work, and the support of friends. We don’t always get that, and I’ve done a great deal of work in places that were certainly less than idea. But I find the closer I come to having that sort of space, the more and better work I do. As I write this, I’m sitting at my desk, typing on the computer. It’s perfectly silent, except for the wind in the pine branches outside my window. If I look to my right, I can see them through the white gauze curtain. Above my desk is a painting of Lake Balaton by my grandmother. (And some sticky notes with deadlines on them. Those aren’t so restful, of course.) If I look to my left, I can see some of my favorite reference books, although it bothers me that they need to be organized. I’ve never had the time to properly organize this space, and I dream of a space that I can make perfectly neat and orderly.

And in the meantime, I’m appreciating the silence.

Looking through my white gauze curtain: 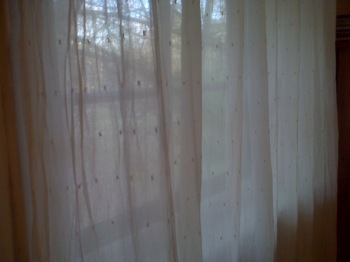