There are some artists whose work is genuinely unique. No one else does what they do.

Often their work is within an artistic tradition of some sort. But although you can see the connection with that tradition, the work has something of its own, something that makes it different from what anyone else does within that tradition. Edward Gorey comes to mind. No one else did what Gorey did – you can tell his work immediately.

I would put Isabelle de Borchgrave in that category. She’s an artist who, among other things, makes dresses out of paper. But what dresses! I’ll show you by including a video I found on YouTube:

Look at the details! And then realize that the dresses are all made of paper. Who would even think to make something like that?

My second example is Patrick Dougherty, whom I’ve written about before. I’ve called his work fairy tales in wood. Here are some examples of Dougherty’s work: 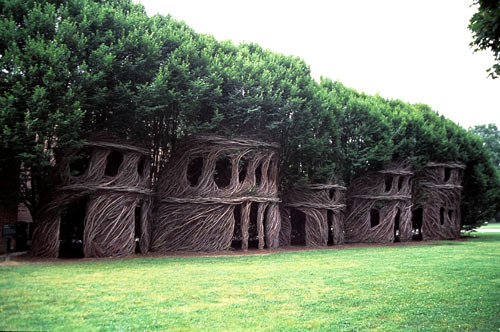 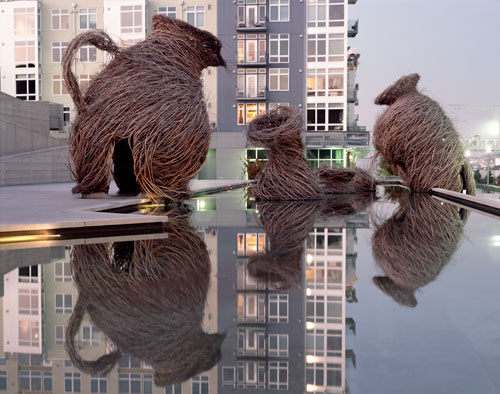 I can see the connection with environmental artists like Andy Goldsworthy, whom I also happen to love, and who is also a true original. But what Dougherty does feels different. It feels like a sort of storytelling.

So the question for me is, what about my work? What in it is original? What in it looks different from what anyone else does? I believe strongly that you can’t set out to be original. You can’t say, I’m going to do something different now. The way to do it is to look within yourself, to figure out what you have in you. There are writers whose voices sound original to me, like Kelly Link. I know there are stories of mine that have not been particularly original, that have been derivative in one way or another. And that’s all right, that’s certainly not a terrible thing to be. Most art is influenced by other art. That’s how most art is made.

But what in me is different? What in me is me, rather than someone else? I think my most original stories are also my best: “Singing of Mount Abora,” for example.

I still have to find whatever that is, that voice. The problem is, that takes writing a lot, focusing on writing in a way that’s difficult for me to do right now, when I have so many other obligations. But I think I’m going to have to do it, if I want to become the writer I believe I can and should be. I just have to figure out how . . .

In the meantime, the podcast I did with Paul Park, Eileen Gunn, and Cecilia Holland, moderated by Karen Burnham, is now available online. Go listen!

(Note to the artists: I looked on the relevant sites for notices not to repost the video and pictures, and did not find any. However, if you would like me to delete them, I will of course do so on request.)

3 Responses to Being Unique