You’d think that being yourself would be the easiest thing in the world, wouldn’t you?

But I think we lose ourselves somewhere along the way. I suspect it starts in sixth grade, meaning middle school, which is a sort of state-sponsored engine for the crushing of souls. In sixth grade we learn, if we haven’t learned it already, that we’re supposed to be a number of things we probably aren’t naturally, such as cool. Sixth grade was when I first started to realize that there were fashionable clothes, and that I didn’t have them.

And then there’s high school, where the message becomes more complex and sophisticated. In my high school, there was tracking, which meant that certain kids were on the academic track and certain kids weren’t. (I was on the honors track, which was a separate system, about fifteen of us taking classes all together, essentially separated from the rest of the school. Imagine how cool that made us! If you did not notice the sarcasm in that last sentence, you must have gone to school in another country.)

I had a vague idea though all this that I wanted to be a writer, that writing was somehow at my core. But I was also the captain of the debate team, because I was probably going to law school, and the Cheshire Cat in Alice in Wonderland because my boyfriend was in drama, and on the tennis team I have no idea why, because I’m naturally the sort of person who cannot hit balls.

And then I went to college at the University of Virginia, and I was supposed to be pretty and have boyfriends and excel academically and go to law school, but by then I think I had developed a subversive streak. I worked as an artist’s model, I dated the boys who had to leave next semester, I stopped telling my family which classes I was taking because they were simply not going to understand how African and Caribbean Literature was going to advance my career.

But I still went to Harvard Law School. And that was it for me. I think at one point, on the forty-second floor of the MetLife building in Manhattan, I looked at myself in the bathroom mirror and asked the Caterpillar’s question: who are you?

It’s very difficult, after you’ve spent twenty years and eighty thousand dollars becoming someone else, to become yourself again. It takes time. At that point you can’t just be yourself anymore, because you have no idea who you are. You have to figure it out.

I’m sure there’s a better and easier way than the way I tried, the way that more or less worked for me, over time. I first read about it in Oprah Magazine, make of that what you will. The way has two steps:

First, ask yourself what you like.
Second, try to go in that direction.

So for example, if you’re standing in front of a display case full of cakes, as I was yesterday at Berdick’s, look at all the cakes carefully and ask yourself, what do I actually like? Do not order the richest, most chocolaty thing because that’s what you’re supposed to order in a chocolate shop. Do not order whatever looks least caloric because you’re supposed to be losing weight. Try to figure out what you actually want. And then get it, unless you’re simply not sure. In that case, order something as an experiment, and see if you like it. Treat your journey through the world on any particular day as an experiment in what you like.

There are a number of things I thought I liked that I realized I didn’t like after all. Dramatic, sweeping skirts. They were gorgeous, and I kept stepping on them. Waist-length hair. I had it for years, and it didn’t actually suit me. (I grew up with short hair, which was my mother’s idea, and that didn’t suit me either. So I’ve been to both extremes.) I’ve been through three different pianos because I thought I really ought to have a piano, and they were free. (There are a lot of free upright pianos out there.) Each time, they took up space and were never played. And don’t get me started on when I adopted two borzois because I had a secret thought that I might be a Russian countess under the skin. (I am not. I like pets that walk themselves and have no deep-seated desire to slay wolves on the steppes.) And no matter how beautiful I think hats are, I will never, ever wear them because I find them hot and itchy.  And they’re always blowing off in the wind.

In other words, I’ve made some strange mistakes.

The surest way to become yourself again, I think, is to discover what you actually like, item by item, and fearlessly acknowledge it, no matter how uncool it makes you. I have a passion for murder mysteries, for example. I like Land’s End cardigans, and buy them in various colors. I also like pearls, and brooches of various kinds (I know, what am I, sixty-two?). Also, The Secret of Roan Inish and banana splits (I know, what am I, twelve?). I will probably never wear a scarf, because I have a passion for murder mysteries and it would give someone a convenient way to murder me, thank you. Most modern dance bores me, but then so does most Russian ballet. I don’t really see the point of modernist art. I love the pre-Raphaelites and Art Nouveau, and if that means I have bad taste, so be it.

I remember the days when I used to write with a fountain pen, until I realized I didn’t really like it. I was just trying to fit an image I had of myself as a writer. Now I write with a cheap rolling ball ink pen.

Figure out what you like and move toward it, one item at a time. Each item individually may seem trivial. But in the end, you will start to figure out who you are, and to become it. 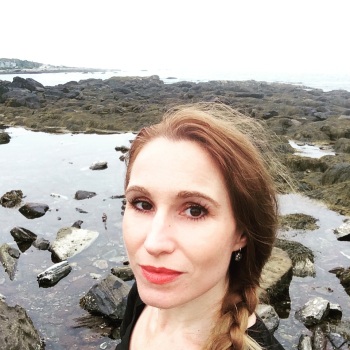 18 Responses to Becoming Yourself