Today, I had a particularly writerly day.

As you probably remember, I had turned in my Folkroots column earlier in the week. It’s a column called “Fairies and Fairylands,” and it should appear in the June issue of Realms of Fantasy. Yesterday, Doug Cohen had emailed me about the column, asking whether it was accurate to identify J.M. Barrie’s Peter Pan stories as Victorian, since they had been published in the early twentieth century. He was right, of course. I should have identified them as Edwardian, or perhaps early Modern. That’s what a great editor does: alert you to your mistakes, so you can make your column as accurate and informative as it can possibly be. I’m always grateful for good editing. As I was reading through the manuscript, I found some other changes I wanted to make. One paragraph was too long, so I deleted a description of Lord Dunsany’s “Kith of the Elf-Folk.” It hadn’t really fit into the paragraph. And I was missing a general paragraph on what to do when you encounter fairies, how to behave. I thought that was necessary. Because what if you do? It’s important to know, isn’t it? So I spent the morning revising.

Before I could send off the revised manuscript, I had to rush to Harvard Square to have lunch with Niall Harrison, the Editor-in-Chief of Strange Horizons, and Matt Denault, who is one of the Strange Horizons reviewers. Niall lives in Oxford, and was in Boston for a week. Today was his last day here, so I’m glad I was able to meet him. We went to a Thai restaurant, where I had shumai and tom yum, and then to Bob Slate’s. I’m so sad that Bob Slate’s is closing. It’s been in Harvard Square for so long, and as far as I’m concerned, it’s the best stationary store in the world. I write in notebooks from Bob Slate’s. I bought seven of them, narrow ruled, with heavy paper. I hope they last me several years. Here are Niall and Matt in front of the store: 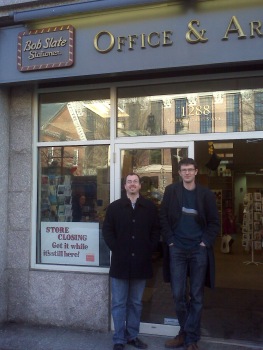 Then we went to Burdick’s, the chocolate shop. We had the hot chocolate, and although I only had a small cup, I have to admit that I’m still feeling its effects. I’m not sure how well I’ll sleep tonight. (I know, it’s silly, but I respond to both coffee and chocolate that way. They keep me up.) Here is the chocolate shop:

Niall and Matt went off to Pandemonium, the science fiction and fantasy bookstore. I needed to return home, because I still had a column to send out. But I had half an hour before I needed to get on the T to meet my ride home, so I went to some of the old places I remember from when I was a law student at Harvard. The first was the Brattle Square Florist, where I used to buy myself flowers:

The second was Colonial Drug, where I used to buy my favorite perfume, Balenciaga’s Prelude. It’s such an unprepossessing entrance, but the store carries all the great perfumes, from the couture houses. That perfume was discontinued years go, but as I looked at the perfumes in the glass case, I saw a bottle! I asked the price. Of course, it was incredibly expensive: $130. Prelude is now a cult classic, a collector’s item. I’m so sad it was discontinued. And to think I used to scent letters with it! Here is that store: 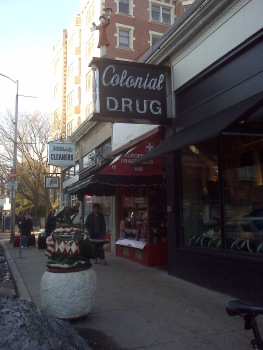 I’m sad that all the old stores are disappearing from Harvard Square.  They used to give it such character, and now it looks like any other expensive urban space, with Anthropologie and American Apparel.

I returned home, finished my column, and sent it to Doug. It was late, I was tired, so I looked at some friends’ blogs, and on one of them I found this:

Can you see what it is? It’s a video of the Mythpunk panel from Boskone! I’m on YouTube! Of course I had to watch the whole thing, the whole hour. And you know what? It was fun to watch! I thought I did pretty well, considering that I was on a panel with brilliant writers and speakers. I noticed that I use my hands a lot when I talk, and you know, I rather like that. It’s me, what I do.

If you’ve never seen me on a panel, this is a good example of how I speak.  I’m like this, well, pretty much all the time.  And I always talk with my hands.

And I thought, if this is what a writerly day looks like, I’m in. The writing, the revising, the meeting and interacting with editors and reviewers. The watching and evaluating your own performance on a panel. There’s a whole lot more that goes into being a writer, of course. A whole lot more writing than I did today, in particular. But that’s also a pleasure.

So it’s been a good day, and I’m feeling all writerly myself. Which feels good.

8 Responses to A Writerly Day