What’s the opposite of “once upon a time”? I want to write not about the past, but about the future.  A future that is just a little like a fairy tale.

I want to write about beautiful things. Because I bought something beautiful today, a print that I had coveted for a long time. It’s called Musical Land, or it used to be, because I think Virginia Lee renamed it, and it’s now Moorland Melodies. Either way, it’s beautiful. Take a look. You’ve seen Lee’s work if you’ve seen the cover of my short story collection, In the Forest of Forgetting. The cover incorporates one of her illustrations.

As I mentioned, I had been coveting this particular print for a long time, and I was glad to see that it was in her Etsy Shop. And then it wasn’t. So I got worried and wrote to her, and she very kindly put a copy in the shop for me. And I immediately bought it.

I’ve made a decision recently: I want to surround myself with beautiful things. And I have a sort of dream (this is where the fairy tale comes in, but I think it’s an entirely practical fairy tale). I want to have a small house, close to a small city somewhere. A city like Asheville, North Carolina, where there are coffee shops and bookstores and a university, and those sorts of things (which make life worth living). But which is also a place I could actually afford (this is where the fairy tale gets practical). And I want to make that house beautiful and individual. (I mention Asheville although I’ve only been there once, because I fell in love with it during that visit. It had such wonderful shops, including antique shops where I could find things I haven’t seen anywhere else. And very reasonably priced, too. Ashton, North Carolina, which appears in several of my stories, is based on Asheville. I even did historical research and took many of the names from names of people who had actually lived in Asheville.) So, a small city, a small house, filled with beautiful things.

I was thinking about this today, and decided to walk around and photograph some of the sorts of things I would want in my house. Here they are:

The first things are a print called Green Girl by Samantha Haney, and the poet Elah Gal, created by C. Jane Washburn. Elah Gal is a character from my story “Child-Empress of Mars,” and I like Green Girl because the print reminds me of one of my favorite stories of all time. 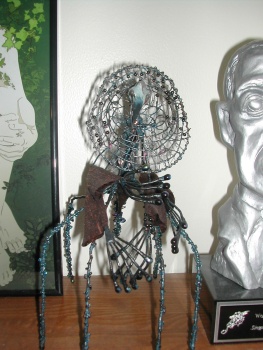 The second two things are my green bowl with two frogs on the rim (which I fill with seashells), and one of the lace curtains from downstairs. I made the lace curtain out of a table cloth. It was an early twentieth-century lace table cloth that was never going to be used for that purpose again, so I cut it in half and hand-sewed a casing for the curtain rod. I love lace curtains, because they let in light.

The next two things are my Indonesian pottery, which you can see on the shelf here, and a watercolor that I bought in a thrift shop. Sorry, I couldn’t get a good photograph of the watercolor, but it’s of a forest and a river. And the Indonesian pottery has lizards and fish and frogs on it. It’s all different shades of green, which is my favorite color (um, obviously). 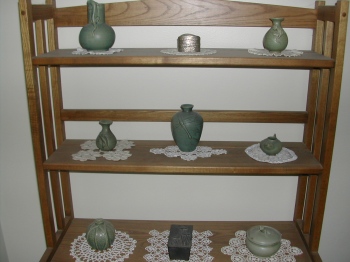 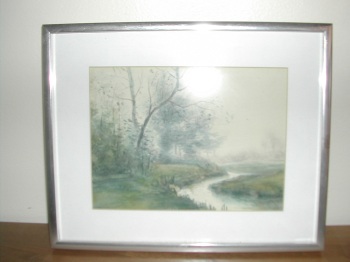 Next we have some of my silver spoons and one of the shelves in my linen closet. These particular spoons are in a pattern called Nenuphar, which is one of my favorites. I don’t know if you can see it, but it’s a pattern of waterlilies. (I don’t know why there are splotches of wite-out on the table. I’ll have to figure out how to clean them off.) The shelf has all sorts of lace on it. Oh, of course this isn’t all the lace I have. I have at least another three shelves. And the silver box is a sugar caddy that’s a family piece. I’ve never kept sugar in it. I’m not sure what I would use it for, but it’s beautiful.

Here we have two shelves, one with art books on it (because I can’t live without art books, despite the fact that they’re so expensive). The other is the small shelf I photographed the other day. Here it has my research material for my next Folkroots column on it. I strongly suspect that in any house I lived in, many of the surfaces would become covered with books. Hopefully I would keep them neat. I do like things to be neat, but books seem to just proliferate. 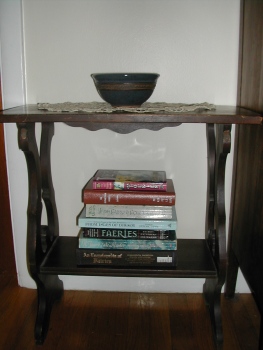 And finally, here we have two beasties: my bear Dani, whom I’ve had since my first birthday, and Cordelia. Yes, that Cordelia. The original herself. Thea’s cat Cordelia is based on her.  But my Cordelia does not talk or take me to the Other Country.

What I would like, in this house of mine, is to create a space for the things – and people – I love. Where writers and artists can gather, where people can stay when they come into town (so there would have to be a guest bedroom), and stay up most of the night talking about their projects, and sleep in late, and next morning go walking through the woods or drink coffee while sitting on a bench in the garden. Where we could have writing workshops.

(Yes, I have been deeply influenced by Terri Windling, who lives in the most wonderful artistic community. Can you tell?) And I could go away, to conventions or traveling in other countries, Ireland or Greece for instance, and there would always be a beautiful place to come back to, a place that felt like home. That’s what I want.

And she lived happily ever after.